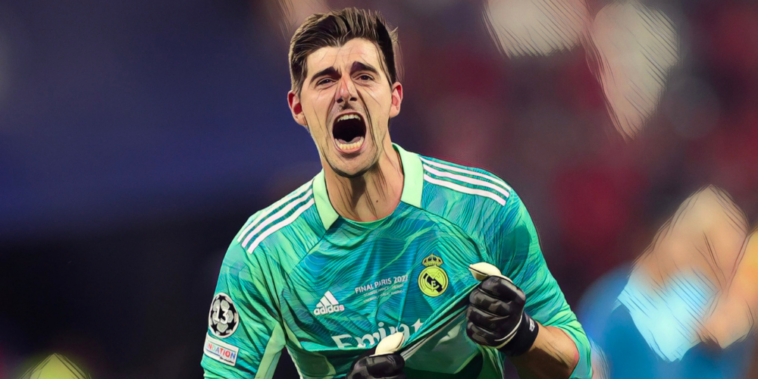 The UEFA Champions League did not disappoint once again in 2021/22, with a thrilling season of elite-level football concluding with Real Madrid crowned as champions of Europe.

Following an unforgettable campaign of fantastic football and captivating comebacks, we’ve attempted to put together our Champions League Team of the Season.

Real Madrid overcame no shortage of hard moments to be crowned Europe’s finest in perhaps the most enthralling run to Champions League success in the modern era.

Thibaut Courtois was at the centre of their success to underline his status as one of world football’s very best goalkeepers, regularly coming to his side’s rescue during the latter stages.

Few will forget his late save from Jack Grealish to set the stage for the semi-final comeback against Manchester City, whilst his goalkeeping masterclass in the final saw Real crowned champions in Paris.

The Belgium international made a huge 55 saves in just 13 games in the Champions League this season.

Liverpool’s biggest creative threat provided three assists for the runners-up, whilst his penetrative passes and forward-thinking football were a major part of the Reds’ progress to the final.

He ranked among the competition leaders for crosses (3rd), progressive passes (4th), key passes (6th) and passes into the final (3rd).

His lapse to lose Vinicius Junior for the final goal will be an abiding memory despite a fine game, in what has been a strong season for the right-back in Europe.

Ibrahima Konate arrived from RB Leipzig last summer to address the problem position which had derailed Liverpool’s season and. whilst he has had to be patient in the Premier League, has shown his worth during the club’s Champions League campaign.

Konate was trusted to start six of the Reds’ seven knockout stage fixtures, opening the scoring in both legs of the quarter-final win over Benfica and looking assured alongside Virgil van Dijk.

We fought until the end.
I’m convinced this experience will help us to learn and come back much stronger next year.

Paris was full of red fans and I would like to thank all of you for your outstanding support during this final and the whole year.
❤️🔴 pic.twitter.com/Hou2OLfVCW

The 23-year-old’s athleticism has been invaluable to Liverpool’s high defensive line and the Frenchman will have made notable strides after a positive first season at Anfield.

Real Madrid appeared set for a season of transition following the departures of Sergio Ramos and Raphael Varane last summer, but the improving Eder Militao has formed a fine partnership with summer arrival David Alaba.

Militao has covered the loss of that experienced duo in impressive fashion, leading the Champions League for interceptions and growing into his role as the front-footed defensive leader of Los Blancos’ backline.

Despite a slight dip in form towards the end of the season, the Brazilian has been an ever-present in a Real Madrid side that ends the campaign as La Liga and Champions League winners.

Cancelo was a key performer in a Manchester City side that were seconds from back-to-back Champions League finals, scoring twice and providing three assists.

Each of his three assists came in the group stage win over Club Brugge as the full-back joined an exclusive group of players to have registered a hat-trick of Champions League assists.

🗣️ Grealish: "João [Cancelo] is unreal! I can't tell you how good he is, honestly one of the best players I've ever played with."#UCL pic.twitter.com/Xi6PN0JjZ6

A fine footballer on either flank, he has been among the most impressive full-backs in European football this season.

The driving force behind Villarreal’s run to the semi-finals, Dani Parejo continues to be an overlooked member of Spain’s midfield orchestrators.

Whilst the exciting Arnaut Danjuma and in-demand Pau Torres stole most of the headlines, it was Parejo’s patrolling of the midfield with an elegant class that stood out for Unai Emery’s side.

Parejo is ageing like a fine wine and has excelled since leaving Valencia for Villarreal on a free transfer two seasons ago. The 33-year-old ended the current campaign with 13 assists in all competitions and a vital role in Villarreal’s surprise run to the Champions League’s last four.

The Ballon d’Or winner remains timeless and can dominate games in multiple midfield roles, providing a touch of class and composure on the Real Madrid midfield.

Nice to see you again 🏆 pic.twitter.com/kl0adlP3xH

His outrageous outside-of-the-boot assist against Chelsea was the highlight in a campaign which saw the Croatian end the season with a fifth Champions League winners’ medal.

One of the best playmakers of this, or any, generation.

The Egyptian’s electric form helped Liverpool become the first English team to progress from the group stage with a perfect record of six wins from six, before scoring the crucial second as the Reds beat Inter Milan at the San Siro in the last 16.

As the goals slowed during the season’s run-in he still found ways to impact games, including providing assists in both legs of the semi-final win over Villarreal.

Vinicius Junior has provided the perfect supporting role to Karim Benzema this season, scoring 22 goals in all competitions during a brilliant breakthrough season at Real Madrid.

The most crucial of those decided the Champions League final as Vinicius scored the only goal of the game against Liverpool in Paris, whilst he also netted a superb individual effort in the club’s thrilling semi-final tie with Manchester City.

22 goals and 20 assists for Vinicius this season.

And when Madrid needed him most he stepped up ✌️ pic.twitter.com/HScue0Sgfe

Four goals and six assists are an impressive total for the 21-year-old, with his final winner ensuring his place in the competition’s history.

The best player in Europe this season, bar none.

Benzema’s brilliance has made him the odds-on favourite for the Ballon d’Or and with good reason, following a career-best campaign for Real Madrid.

The 34-year-old has scored 44 goals from just 46 games, with 15 of those coming in the Champions League alone.

Karim Benzema finishes the season as the Champions League top scorer for the first time in his career 🌟 pic.twitter.com/nlL8KVU0AD

His role in Real Madrid’s run was remarkable, scoring successive hat-tricks against Paris Saint-Germain and Chelsea, in addition to three goals across the semi-final win over Manchester City.

Sebastien Haller exploded in his first campaign at Champions League level, with a four-goal haul on his competition debut setting the tone for his season.

Haller set a whole host of records including becoming the fastest player to reach 10 goals in the competition, whilst only Cristiano Ronaldo had previously scored in all six group stage games.

Sébastien Haller in the #UCL

And he even had time to put one in his own net. 😅 pic.twitter.com/qVsaRLbAWr

Whilst Ajax failed to progress beyond the last 16 despite his exploits, his first full season has ended with 34 goals in all competitions – a staggering haul for a player who struggled in the Premier League.