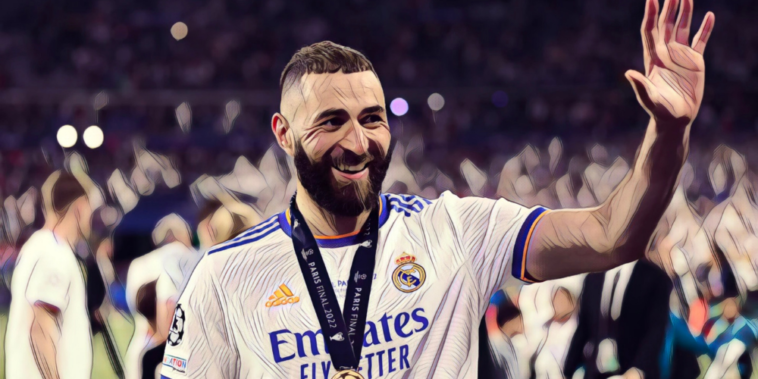 Another season of Champions League football has reached its conclusion, with Europe’s elite competition once again providing enthralling entertainment.

Real Madrid are the champions of Europe for a record-extending 14th time, with the Spanish giants having enjoyed an unforgettable run – eliminating three of the four Premier League sides – on their route to Champions League success in 2022.

Following Real Madrid’s win over Liverpool in the final, we’ve decided to reminisce on the season gone by and hand out our Champions League awards for the 2021/22 campaign.

Karim Benzema has been the inspiration behind Real Madrid’s record-extending triumph, with the French forward enjoying the best season of his career in 2021/22.

The 34-year-old has scored 44 goals in 46 games for the European champions and the Ballon d’Or beckons for Benzema, who could become the second-oldest winner of the accolade after Stanley Matthews won the inaugural prize in 1956.

Karim Benzema finishes the season as the Champions League top scorer for the first time in his career 🌟 pic.twitter.com/nlL8KVU0AD

Benzema’s brilliance in the knockout rounds propelled Real through to the final, as Carlo Ancelotti’s side continually overcame adversity and near elimination to progress.

His stunning hat-trick against Paris Saint-Germain turned the tie in the last 16, before another treble handed the Spaniards a first leg advantage against Chelsea at Stamford Bridge.

A crucial goal in the return and starring influence over two legs against Manchester City in the semi-finals has made Benzema the most influential footballer in Europe in 2021/22.

Just when Real Madrid appeared dead and buried, the Spanish side found a way to win.

Even by the standards of an incredible campaign of comebacks for Los Blancos, their late turnaround against Manchester City was something special.

City – who had dominated the tie across two legs – were two goals ahead on aggregate heading into the 90th minute of the return at the Bernabeu, before two goals in less than 90 seconds levelled the tie and forced extra-time.

Rodrygo was the hero of the hour, the substitute sending an atmospheric Bernabeu into euphoria as he scored twice in the final seconds to leave the Premier League champions stunned in Spain.

Karim Benzema competed the comeback from the spot in extra time and sent Real Madrid through to the final.

Carlo Ancelotti joked that he is the ‘record man’ after leading Real Madrid to the trophy and it’s hard to disagree after a record-breaking success.

The Italian became the first man in history to win league titles in each of Europe’s five major leagues this season and followed the club’s La Liga success with the Champions League to secure a historic double.

Ancelotti has now won the Champions League on four occasions as a manager, eclipsing the record he shared with Bob Paisley and Zinedine Zidane.

The 62-year-old has perhaps not always received the credit his résumé deserves, but Don Carlo has ensured his name will remain alongside the game’s great coaches for decades to come.

Sebastien Haller’s struggles in the Premier League were well documented as he failed to make an impact at West Ham, with the forward allowed to leave for Ajax in a cut-price deal after just 18 months at the London Stadium.

Even given a positive first six months in Amsterdam, the 27-year-old’s first-ever Champions League campaign will have come as a huge surprise to those who watched him struggle in English football.

Sébastien Haller in the #UCL

And he even had time to put one in his own net. 😅 pic.twitter.com/qVsaRLbAWr

Haller enjoyed an explosive first season among Europe’s elite, including becoming the first player to score four on his Champions League debut since Marco van Basten in 1992.

His incredible form continued as he scored in each of Ajax’s six group games, joining Cristiano Ronaldo as the only player to achieve the feat. His run of 10 goals in six games also saw the Ivorian become the fastest footballer to reach 10 goals in the competition, before he added an 11th of the campaign during Ajax’s last-16 exit to Benfica.

Thiago Alcantara illuminated Liverpool’s dead-rubber group game with Porto in November, opening the scoring with a stunning strike at Anfield.

As a loose ball broke in the direction of the Spaniard he struck the sweetest of half-volleys back towards goal, the ball skimming through a succession of bodies to find its way into the bottom corner without touching the turf.

An outrageous piece of technique from a footballer capable of special moments.

Sheriff Tiraspoll announced themselves to the Champions League stage with a shock win at Real Madrid in September, with the competition debutants stunning the record winners at the Bernabeu.

The Moldovan champions took a surprise lead through Jasurbek Yakhshiboev’s first-half header, though Karim Benzema levelled the scores from the spot and looked to have ended hopes of a huge upset.

⚽ Did you know? This season, Sheriff became the 146th different club to appear in the #UCL group stage – and the first from Moldova.

They enjoyed a memorable campaign, earning a surprise late win over Real Madrid on MD2. pic.twitter.com/FDli6JnZ1P

However, Sheriff – who came through four rounds of qualifying to reach the group stage – snatched a historic win in the Spanish capital as Sebastien Thill’s stunning last-minute goal sparked wild celebrations from the visitors.

If ever there was an advert for Champions League knockout stage football, it was Manchester City’s captivating semi-final first leg with Real Madrid.

City were brilliant for much of a pulsating clash at the Etihad, but found themselves up against a Real Madrid side whose Champions League-winning campaign was built on a refusal to accept defeat.

Pep Guardiola’s side appeared to be heading towards a second successive final after racing into an early lead. Kevin De Bruyne scored inside the opening 94 seconds, before Gabriel Jesus doubled the home side’s advantage just nine minutes later.

Each time City threatened to mount an unassailable lead however, Real hit back.

Karim Benzema scored twice for the visitors in an electric game that saw seven goals shared, his second coming from the penalty spot with an audacious Panenka penalty.

Real departed as the happier of the sides despite defeat and conceding four goals, with the return leg failing to disappoint in one of the most memorable ties in recent seasons.

Competing in just their fourth Champions League campaign, Villarreal upset the odds to reach the semi-finals for a second time.

Unai Emery’s side were far from fashionable on their venture to the last four, but took the significant scalps of Juventus and Bayern Munich.

After winning the Europa League last season, the Spaniards made their presence felt in the Champions League this time around and overcame illustrious opposition with defensive discipline and moments of quality.

Hailing from a city of just 50,000 people and in their first Champions League campaign for a decade, Villarreal performed above all expectations and briefly threatened to eliminate Liverpool after levelling their semi-final tie in Spain.

'Villarreal are a disgrace'

The opposite of a 'disgrace' 🙌 pic.twitter.com/UuDkE63EYq

Barcelona endured their worst Champions League campaign for more than two decades and exited at the group stage in 2021/22.

Not since 2000/01 had the Catalans failed to progress to the knockout rounds, but a poor campaign which included thrashings against Bayern Munich and Benfica saw the five-time winners crash out early.

4 – Barcelona has been knocked out from a Champions League group stage for the fourth time ever, the first one since 2000/01 when they played the UEFA Cup. New. pic.twitter.com/EkU4ckbjrv

Xavi’s arrival as manager at least led to a domestic revival and a runners-up finish in La Liga has ensured Barcelona will be back in the Champions League next season.

Bayern Munich – expected to pose a strong challenge – deserve a mention for their meek exit to Villarreal in the last eight.