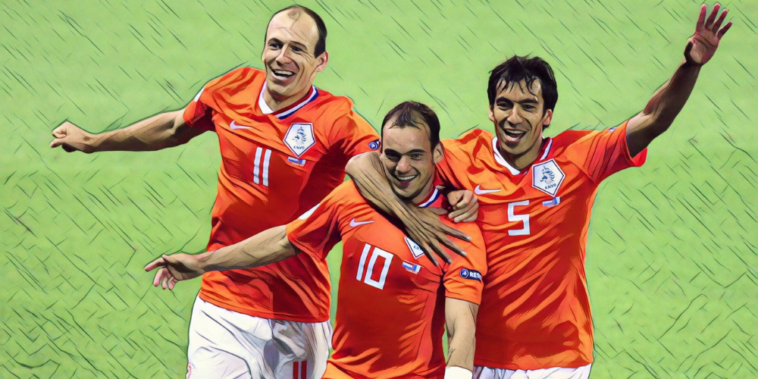 Euro 2008, a thrilling tournament and summer where the Spanish finally delivered after decades of underachievement on the international stage.

Few could have envisaged the dominance that was to come from Spain’s ‘Golden Generation’, as international football was introduced to the tiki-taka style that would later define an era.

Elsewhere the Netherlands thrilled before ultimately falling short, whilst both Russia and Turkey upset the odds to reach the semi-finals before bowing out after memorable runs to the latter stages.

Named as Player of the Tournament following his outstanding performances in Austria and Switzerland, Xavi – as he so often was for club and country – was the metronomic figure that allowed tiki-taka to thrive.

Spain’s dominant possession-based football ran through their diminutive midfield lynchpin, whose ability, awareness and ability to dissect sides with crisp passing stood out amongst a host of Spanish stars.

With the impressive Marcos Senna anchoring the base of the midfield behind him, Xavi was the puppet-master for Luis Aragones side as they finally delivered on the international stage, thrashing Russia in their opening fixture before progressing to the knockout stages with a flawless record.

Spain failed to concede a single goal on their way to being crowned as champions of Europe, the technical talents of the Barcelona midfielder at the heart of a side who would become arguably the greatest international football has seen.

After scoring the opener in the semi-final win over Russia, it was fittingly Xavi who provided the killer pass in the final win over Germany, sliding in Fernando Torres to score the goal that crowned Spain winners.

The leading light of the most exciting side at the finals, Wesley Sneijder thrived in a Dutch side who looked capable of blowing all before them in the tournament’s opening stages.

Drawn in a Group of Death containing both Italy and France, the Netherlands thrashed the former 3-0 in their opening fixture with Sneijder providing the assist for Ruud van Nistelrooy’s opener before netting a second from close range.

Sneijder was the architect again as Marco van Basten’s side inflicted France’s heaviest ever European Championship defeat in their next fixture, beating the 2000 winners 4-1 in a ruthless counter-attacking performance with the midfielder again scoring one and providing another.

Rested for the final group stage game – a 2-0 win over Romania – he returned to the line-up for a quarter-final tie against Russia and provided his third assist of the tournament despite the Dutch exiting the competition in extra-time.

No player provided more goals than the Real Madrid midfielder who was at the heart of the Oranje’s uber-attacking performances, increasing his reputation as one of the best young talents in Europe.

Russia bounced back from an opening game defeat to Spain to become dark horse for the tournament, beating Greece 1-0 in their next fixture to set up a final group game showdown with Sweden.

Guus Hiddink chose to include Andrey Arshavin in his squad despite the winger missing the opening two fixtures through suspension, a wise move as the star inspired Russia to a 2-0 win and place in the quarter-finals.

Arshavin was named Man of the Match after scoring a decisive goal against Sweden, before making Europe’s biggest clubs sit up and take notice with an electric display as the in-form Dutch were beaten in the last eight.

The fleet-footed star – who arrived into the tournament having spearheaded Zenit St Peterburg’s UEFA Cup win – scored one and provided two others as Russia won 3-1 in extra-time, a statement victory from an exciting side that were inspired by their mercurial wide man.

Arshavin’s performances earned him a move to Arsenal six months after the tournament’s conclusion, but he was unable to capture the sparkling form that terrorised Europe’s best on a consistent basis in the Premier League.

Named as captain of Spain following the omission of Raul from international duty, Iker Casillas led his side to major tournament success after years of international underachievement.

Casillas may not have been the quintessential leader but he was undoubtedly one of the world’s best goalkeepers, a brilliant last line of defence behind a backline whose resilience led to huge success.

After reaching the knockout stages with three wins from three group stage fixtures, Spain progressed to the final without conceding a goal, Casillas saving penalties from Daniele De Rossi and Antonio Di Natale in the shoot-out victory over Italy in the quarter-finals.

Casillas marshalled the side with authority throughout and another clean sheet against Germany in the final provided the foundation for Fernando Torres to score a historic winner in Vienna.

After a difficult start to the tournament, Bastian Schweinsteiger showed his value to a far from vintage Germany side as they reached the final.

Schweinsteiger was left out of the side for the opening win over Poland before being sent off in stoppage-time of the defeat to Croatia, missing Germany’s final group stage game as a result.

He rose to prominence in the knockout stages, however, scoring one and providing two assists as the Germans beat Portugal 3-2 in a thrilling quarter-final tie.

The midfielder scored again in another 3-2 victory in the last four, scoring the opener as Joachim Löw’s side progressed to the final at Turkey’s expense.

Schweinsteiger was amongst Germany’s better performers in a narrow final defeat to Spain and alongside captain Michael Ballack was key to his side’s progression to another major tournament final.