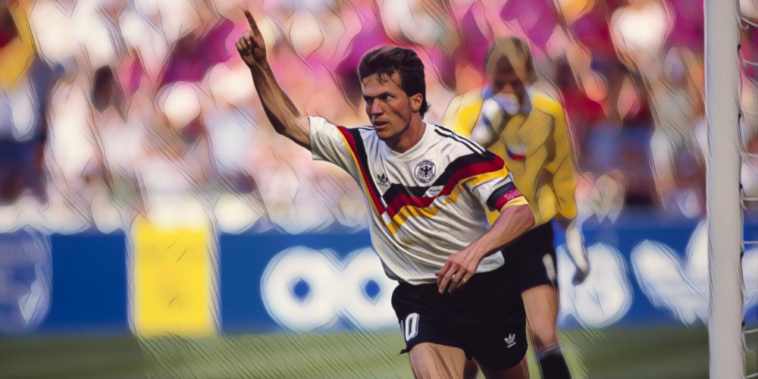 Italia ’90 retains a special place in the affections of football fans from that era, a tournament which produced its fair share of drama and emotions to become one of the most memorable World Cups.

Free-flowing football and goals may have been at a premium during a tournament in which defences reigned supreme, but Italy provided a brilliant backdrop to world football’s biggest spectacle.

With Qatar 2022 underway, we look back and remember past players who shone in previous editions of the World Cup.

Here are five of the most iconic players from World Cup 1990.

“Football is a simple game: 22 men chase a ball for 90 minutes and, in the end, the Germans always win.”

Gary Lineker’s famous quote following England’s semi-final exit to West Germany has lived long in the memory, outlining his frustration at how the Germans more often than not find a way to win at major tournaments.

Italia ’90 ended with West Germany crowned as world champions for a third time, with the driving force of their victorious campaign the brilliant midfield talent of Lothar Matthaus.

Matthaus was at the centre of the team’s performance, scoring crucial goals and helping nullify the threat of opposition stars who threatened to derail the German’s path towards success.

Matthaus scored twice in an outstanding performance as West Germany thrashed a talented Yugoslavia side in the group stage, before adding another effort in a convincing 5-1 win over the UAE.

He scored his fourth of the tournament from the spot in the quarter-final win over Czechoslovakia and after back-to-back World Cup final defeats in 1982 and 1986, the Germans ended the 1990 edition clutching the famous trophy in Rome.

Matthaus ended 1990 named as Europe’s finest footballer after being crowned winner of the Ballon d’Or.

Italy entered a home World Cup with problems in attack, before an unlikely name emerged to propel the host nation to the semi-finals.

Salvatore ‘Toto’ Schillaci had just one cap for the Azzurri and began the World Cup on the bench, but seized his chance in stunning style to emerge as one of the stars of the tournament.

Italy had scored just twice in seven games leading up to the tournament in a concerning lack of firepower, though Schillaci’s winner off the bench earned a 1-0 win over Austria in their opening fixture of Italia ’90.

Schillachi continued to fire as the tournament progressed, netting goals against the United States, Uruguay, Ireland, Argentina and England to win the World Cup’s Golden Boot.

The forward’s goals helped the Azzurri to a third-place finish on home soil, whilst his extraordinary performances saw him beat established superstars such as Lothar Matthaus and Diego Maradona to the World Cup’s Golden Ball.

Schillachi ended his international career with seven goals from just 16 caps, six of which came at the World Cup finals in 1990.

Paul Gascoigne earned his place in the England side for Italia ’90 with a brilliant performance in a warm-up clash with Czechoslovakia and the midfielder’s precocious gifts excelled on the world stage.

Bobby Robson’s side reached the semi-finals in what was the Three Lions’ best tournament performance since 1966, with Gascoigne at the heart of their success with his dynamism and drive from midfield.

The 23-year-old was fearless with his football and produced assists for winning goals against Egypt and Belgium, before finding himself at the centre of one of England’s most infamous World Cup moments.

Stretching to make a challenge in the semi-final with West Germany, Gascoigne received a yellow card for his foul on Thomas Berthold – meaning he would be suspended for the final should England progress.

Gascoigne was visibly emotional in the aftermath and struggled to regain his composure as the Three Lions exited the competition on penalties in Turin.

Diego Maradona might not have reached the heights of Argentina’s successful 1986 campaign, but the brilliance of the South American helped carry his nation to a second successive final.

The intervening years had seen Maradona continue to shine as the world’s finest footballer, helping Napoli overthrow the traditional powerhouses of Italian football to win two Scudettos, a UEFA Cup and a Coppa Italia.

Few gave Argentina much chance despite the presence of Maradona and their status as defending champions, with a shock defeat to a combative Cameroon in their opener adding to that widely-held view.

Maradona, however, provided he was more than capable of dragging along an under-performing side beset with injury problems, overcoming his own fitness issues to help inspire La Albiceleste’s route to the final.

His assist in the second-round win over Brazil was vintage Maradona, taking out a series of opposition challenges with evasive dribbling and a perfect pass as Argentina won the battle of South America’s superpowers in Turin.

Roger Milla’s dancing at the corner flag remains among the most iconic imagery of Italia ’90, as the veteran forward came out of international retirement to help Cameroon make history.

Having been persuaded by pleas from Cameroon president Paul Biya to return for the 1990 World Cup, Milla made himself a star on the big stage with four goals in Italy.

He came off the bench to score twice in the group stage win over Romania – becoming the World Cup’s oldest goalscorer in the process at 38 – before scoring another brace as Colombia were beaten in the last 16.

Cameroon’s run was eventually halted against England in the last eight, though the Indomitable Lions became the first African team to reach the quarter-finals.

Four years later, Milla – who was named African Footballer of the Year in 1990, 14 years after his 1976 award – broke his own record as the oldest goalscorer in World Cup history by scoring against Russia in the 1994 FIFA World Cup, aged 42.