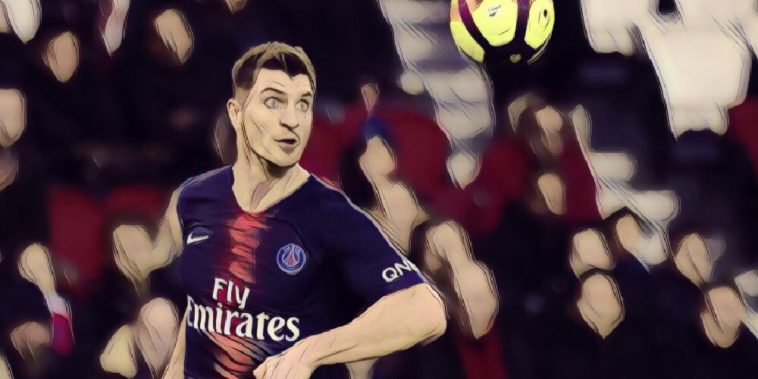 Thomas Meunier has suggested that he could see out the remainder of his contract at Paris Saint Germain, despite having once again been linked with a transfer to the Premier League.

The Belgium international is reportedly attracting attention from a number of Premier League clubs, with Arsenal and Manchester United being most strongly linked to his signature, with the 28-year-old having just one year remaining on his current deal.

However, with a number of PSG players much closer to the end of their contracts than he is, Meunier suggested that ‘nothing’ could happen this summer.

“There are many things happening at the club. Dani Alves, Gigi Buffon, Adrien Rabiot, are at the end of the contract, and we are not bad at entering our last year,” Meunier told Le Parisien.

“All these extras make nothing happen. The club knows my idea of ​​staying. I think that if we do not have a return, it is that it is also a solution that can arrange them.”

Speaking in more detail about his own future, Meunier said that seeing out the final year of his contract at the Parc des Princes could actually suit him, while adding that his situation would be different to that of Adrien Rabiot, who has not featured for the French champions since December following a contract standoff.

“[Leaving on a free] is something that could suit me. I do not think the club would do a lot of money on me, actually. I have a market value, but I’m a defender, I played one game in three, I’m going on 28 years old.

“It’s not like Adrien Rabiot worth €50 million. I told the leaders that I was ready to stay, that I would like it a lot. They did not tell me, ‘We absolutely want to sell you’. They know that at some point they will need me.

“If the club tells me: ‘Listen, we want to sell you, we need money, there is financial fair play’, and that I will not play next year, we will find a solution that will arrange the two camps, of course.

“There is no advanced contact. There have been phone calls since January with interested clubs. There are a dozen clubs, all of which are in the top five of their leagues.”