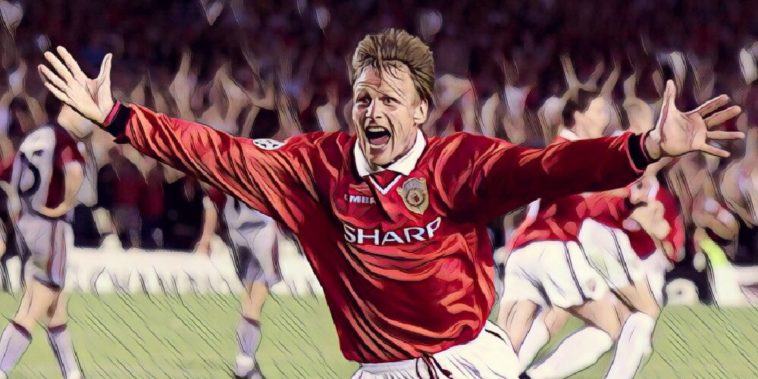 The Champions League is widely regarded as the pinnacle of club football, with the final an illustrious occasion for the opportunity to win Europe’s biggest prize.

Since its rebranding from the old European Cup in 1992, a handful of English players have managed to write their name into history by scoring in the tournament’s showpiece finale.

We’ve decided to look through the European archives at the six English players to score in Champions League finals.

A dramatic substitute appearance in perhaps the most dramatic finish to a final in history, former Manchester United striker Sheringham wrote his name into the club’s fabled history in 1999.

Sir Alex Ferguson’s side were chasing an unprecedented treble of major honours when they faced German giants Bayern Munich in Barcelona’s Camp Nou Stadium, looking to lift the European Cup for only the second time in their history.

Having scored in United’s FA Cup final win four days earlier, Sheringham was perhaps unfortunate to be left out of the starting XI as first-choice pairing Andy Cole and Dwight Yorke were preferred up front.

United’s hopes took a major blow when Bayern scored early, with Mario Basler’s free-kick putting the Germans ahead after just six minutes. The Bavarian side dominated the match for large periods, hitting the woodwork twice, and with United still trailing 1-0, Ferguson introduced Sheringham.

As the game headed into stoppage time, United goalkeeper Peter Schmeichel ventured forward as the Manchester side desperately sought an equaliser. David Beckham’s corner was half-cleared towards Ryan Giggs, who fluffed a right-footed shot back into the area. Sheringham was in the right place, at the right time though, scuffing the ball home to spark wild celebrations, becoming the first English player to net in the UCL final.

Moments later, Sheringham turned provider, flicking on another Beckham corner as Ole Gunnar Solskjaer won the trophy for Ferguson’s side…

An English Champions League final goalscorer, and the only man on this list to do so for a non English club. It is of course Steve McManaman.

With the club failing to compete for major honours, homegrown talent McManaman decided to leave Liverpool for Real Madrid on a free transfer in 1999, fulfilling ambitions of playing abroad and spending four successful seasons in the Spanish capital.

By the end of his debut season in Spain, Real had reached the Champions League final where they would face La Liga rivals Valencia in the first final meeting between clubs from the same country.

Held in Paris, Real dominated the match and ran out convincing 3-0 winners to secure the club’s eighth European Cup.

Fernando Morientes’ header opened the scoring, before McManaman doubled Madrid’s lead with a spectacular volley, a scissor-kick from the edge of the penalty area.

Raul would complete the scoring for the Bernabeu based club, and McManaman was a European champion.

Remember this goal in the 2000 Champions League Final?pic.twitter.com/HR2if3vB9m

The goal which sparked the greatest comeback in final history, Liverpool surprised everyone by reaching the Champions League final in 2005.

Rafael Benitez was in the midst of his debut season at Anfield when the Spaniard guided the club to their first final in 20 years, where they would face a formidable AC Milan side in Istanbul.

The final could hardly have begun worse, with Paolo Maldini scoring for the Italians in the very first minute before Hernan Crespo’s double gave Milan a 3-0 half-time lead.

Incredibly, Liverpool fought back in the second period and within the space of six, whirlwind minutes they were level.

Their opener came via the head of captain Gerrard, who powered home from John Arne Riise’s cross to give Benitez’s side hope.

Vladimir Smicer and Xabi Alonso completed the fightback, with underdogs Liverpool emerging victorious via a penalty shoot-out following a final that will live long in the memory.

As captain, Gerrard would go on to lift the trophy as the Merseyside club secured their fifth European crown..

QUIZ: QUIZ: Can you name every Champions League winner?

Arsenal were bidding to become the first London side to win the Champions League in 2006, when they met Barcelona in the final in Paris.

Arsene Wenger’s side had struggled to replicate their domestic success on the European stage, but solid away displays throughout the competition saw them reach their first-ever European Cup final.

Their hopes were dealt a major blow in the first half, when goalkeeper Jens Lehmann became the first player in the competition’s history to be sent off in the final after bringing down Samuel Eto’o.

Despite their numerical disadvantage, Arsenal took the lead when centre-back Campbell rose highest to head home from Thierry Henry’s free-kick,

The Gunner’s 10-men battled bravely, though Campbell’s header would not prove to be enough as goals inside the last fifteen minutes from Eto’o and Juliano Belletti would see Barcelona lift the trophy.

The first ever all-English Champions League final would see Manchester United meet Chelsea, with the duo facing off on a wet night in the Russian capital of Moscow.

The two teams had competed in a tight title race for the Premier League, with United pipping Chelsea by just two points as they sought a double.

In a typically tight contest, a towering Cristiano Ronaldo header gave Sir Alex Ferguson’s side the lead. Chelsea would however hit back before the interval, with Frank Lampard’s delicate finish drawing the Blues level on the stroke of half-time.

With neither side able to find a breakthrough, the final was to be decided by a penalty shoot-out. Lampard would net his kick, but an infamous slip from captain John Terry took the contest into sudden-death.

Manchester United reached a third final in four seasons in 2011, having won one and lost one from previous visits to the showpiece in 2008 and 2009.

Their opponents were Barcelona, who had beaten them 2-0 two years previously in Rome.

In a Lionel Messi-inspired performance, Pep Guardiola’s side ran out 3-1 winners in an impressive performance at Wembley, but not before Rooney had momentarily given United hope.

Pedro had opened the scoring for the Spanish side just before the half hour, but United were level just seven minutes later.

Driving forward with the ball, the England striker played a one-two with Ryan Giggs before sweeping the ball into the far corner.

Second-half goals from Messi and David Villa would seal the trophy for the Catalan club, with Rooney left to contemplate a second Champions League final defeat.

QUIZ: Can you name all of the Champions League runners up?