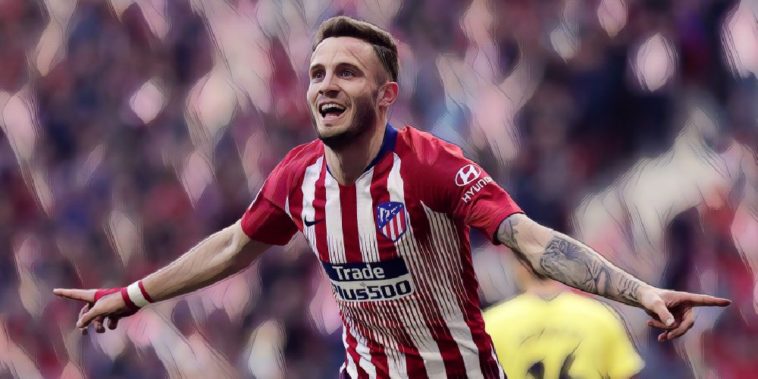 Manchester United are to ‘weigh up’ a move for Atletico Madrid midfielder Saul Niguez, amid speculation that Paul Pogba could be set to join Paris Saint-Germain.

The Spain international is facing an uncertain future at the Wanda Metropolitano after falling out of favour under Diego Simeone, the player playing a minor role in the club’s La Liga title triumph last term.

The 26-year-old had previously been a key man for the Spanish club since breaking into the team in 2014, yet his current lack of action has sparked suggestion that he could be set to leave this summer, despite having signed a nine-year contract as recently as 2017.

Recent weeks have seen reports emerge regarding a possible swap-deal involving Saul and current Barcelona man Antoine Griezmann, the Catalan giants keen to get the Frenchman off the wage bill amid their current financial woes, while Liverpool are also reported to have seen an opening bid rejected.

The Mail are also reporting that Manchester United are ‘weighing up’ a move for the player as a possible replacement for Paul Pogba.

The Red Devils are rumoured to be expecting a formal offer for the Frenchman from PSG, with the midfielder having just one year remaining on his current deal and with no sign that he is keen to extend his stay at Old Trafford.

Should the World Cup winner depart, the club could turn to Saul as his replacement, the Spaniard likely to be on the market for a relatively affordable price of £45m, just a fraction of his reported £128m buyout clause.

With Atletico currently under financial strain, there is a need to move on one of their highest earners, while the player himself is said to be keen for a new challenge.

As well as Saul, United have also been linked with Rennes starlet Eduardo Camavinga, reports this week suggested that they were not encouraged by early discussions with his agent.

Another name mentioned has been Bayern Munich man Leon Goretzka – who is entering into the final year of his current deal – and struggling to come to an agreement with the Bundesliga winners.

Any deal for a midfielder, however, is likely to rest on what funds the club will have available, following the £73m signing of Jadon Sancho and the rumoured £40m deal for Raphael Varane.

With Saul’s current club teammate Kieran Trippier also a target for Ole Gunnar Solskjaer and co, it remains to be seen whether funds will be available to move for a midfielder.