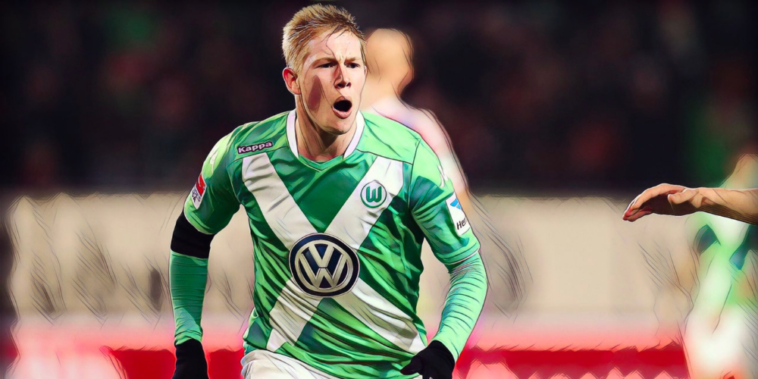 Premier League clubs have often looked to the Bundesliga for potential signings, with Manchester City the latest side to raid Germany’s top division.

City appear to have finally landed their man in Erling Haaland, with the Premier League champions having ‘agreed a deal in principle’ to sign the Borussia Dortmund forward this summer.

Haaland has emerged as one of the most coveted talents in world football after a prolific period in German football, scoring 85 goals in just 88 appearances since signing for Dortmund from Red Bull Salzburg.

Haaland will follow a whole host of leading names to have swapped the Bundesliga for England in recent seasons, with the likes of Jadon Sancho and Ibrahima Konate among the most notable imports from last summer’s window.

The Norwegian will hope to hit the ground running and join a long list of impressive imports from the Bundesliga. Ahead of his impending move to the Etihad, we’ve decided to look back at some of the most memorable.

Here are five of the best Bundesliga to Premier League transfers.

Eyebrows were raised when Tottenham Hotspur forked out £22m to sign Son Heung-Min in August 2015, making the Bayer Leverkusen winger the most expensive Asian footballer in history in the process.

Spurs were coming off the back of a decent first season under the guidance of Mauricio Pochettino and were attempting to build on their 5th-place finish. Looking to add some much-needed firepower to support the goal-scoring exploits of emerging star Harry Kane, Son fit the bill nicely.

He didn’t set the world alight in his first season in North London, scoring just eight goals in 40 appearances, but his contribution was valuable as Spurs secured a 3rd-place finish and a return to the Champions League for the first time in five years.

Son Heung-min with one of the greatest solo goals of all time ✨ pic.twitter.com/8HfnC6GyPA

The following season, Son started to prove his worth. He scored 21 goals in 47 appearances in all competitions and helped Spurs to a runners-up finish in the Premier League, finishing seven points behind eventual winners Chelsea.

Since then, Son has continued to go from strength to strength to develop into one of the finest forwards in the Premier League. The South Korean has scored 128 goals in 322 appearances during his time in England, including a career-best 20 league goals during the current campaign.

The 29-year-old is the leading Asian goalscorer in both Premier League and Champions League history and has surpassed Cha Bum-kun’s record for most goals scored by a Korean player in European competition.

Since Ilkay Gundogan’s arrival at Manchester City in June 2016, he’s been an unassuming and underrated presence in the club’s midfield.

However, the 2020/21 season saw the Germany international seize a prominent role in City’s title challenge, scoring a career-best 17 goals in all competitions as Pep Guardiola’s side secured a third title in just four seasons.

After becoming Guardiola’s first signing at the Etihad – a £20 million arrival from Borussia Dortmund – Gundogan has amassed 251 appearances in all competitions, scoring 47 goals in the process.

The classy midfielder came to Manchester having already tasted Bundesliga success, playing a key part in Jurgen Klopp’s title-winning side of 2011/12. He has since added the FA Cup, four EFL Cups and three Premier League winners’ medals to his collection.

Named in the PFA Team of the Year for 2020/21, Gundogan is one of the best midfielders in English football at present.

After Robert Lewandowski confirmed he would not be renewing his Borussia Dortmund contract back in February 2013, the Bundesliga side were on the lookout for a new star striker and secured the services of Pierre-Emerick Aubameyang from Saint-Etienne.

Rumours predictably began to surround the forward’s future with speculation circulating that one of the Europe’s finest finishers was on his way to the Premier League.

Following a month-long will-he-won’t-he saga, Arsenal managed to secure the signature of the coveted Gabonese international on January 31, 2018, for a club-record fee reported to be £56m.

Aubameyang soon became a highlight in an otherwise drab period for the North London club. He won the Premier League’s Golden Boot during the 2018/19 season after scoring 22 league goals, a figure he equalled the following season in a prolific period at the Emirates.

Named as club captain during the 2019/20 campaign, his goals inspired Arsenal to FA Cup success as the Mikel Arteta era got up and running. The forward netted match-winning braces in the semi-final and final victories over Manchester City and Chelsea respectively.

Aubameyang’s final 18 months at the Emirates proved more disappointing as he fell out of favour with the Gunners, eventually leaving for Barcelona on a free transfer in January 2022 after scoring 92 goals in 163 games for the club.

He has since rediscovered his form in Catalonia, netting 13 goals in 21 appearances to help Barcelona to Champions League qualification.

Roberto Firmino’s transfer from Hoffenheim to Liverpool was finalised for £29m on July 4, 2015, as part of a somewhat scattergun approach to recruitment that saw manager Brendan Rodgers clash with the club’s infamous transfer committee.

Firmino’s start to life on Merseyside proved underwhelming, but the arrival of Jurgen Klopp – a manager familiar with his talents from the Bundesliga – proved the catalyst for an upturn in fortunes.

The Brazilian was utilised as the furthest forward player in Klopp’s favoured 4-3-3 system, the attacking midfielder converted into a false nine with his intense running and intelligent link-play making him the ideal focal point.

The arrivals of Sadio Mane and Mohamed Salah over the next two summer transfer windows saw Firmino become one-third of the Premier League’s most feared forward line, a combination that would bring Liverpool huge success.

Described as the “engine” of his side by Klopp, Firmino’s unique talents have spearheaded the best Liverpool team of the modern era with the Brazilian having scored 98 goals and provided 73 assists in 323 appearances for the club.

If we thought eyebrows were raised when Son joined Spurs, Kevin De Bruyne’s transfer to Manchester City from Wolfsburg for a club-record fee of £54m saw those same eyebrows raised so high you couldn’t see where eyebrows stopped and hairline started.

In fact, you just need to take a look at Jeff Stelling and the boys’ scathing comments on Soccer Saturday at the time of the transfer. Phil Thompson said: “The world is going mad. The money they are paying for this boy is absolutely bonkers.” Paul Merson backed that up with: “I just don’t see £50m for this player. I really do not see it at all.”

With those words ringing in his ears, the Belgian midfielder set about proving them wrong, and by scoring 82 goals and providing 120 assists in 304 appearances, boy has he done that.

De Bruyne has established himself amongst the very finest players in world football at the Etihad, winning City’s Player of the Season accolade on three occasions and joining Premier League legends Thierry Henry and Cristiano Ronaldo in becoming only the third player to win the PFA Player of the Year award in consecutive campaigns.

No player has ever reached 50 assists in the division in quicker fashion than the brilliant Belgian, who has risen to ninth in the all-time rankings – whilst his average of 0.40 assists per game is far superior to any of the eight players he is bidding to catch.

The heartbeat of a City side who have set all manner of records and should rightly be regarded amongst the best of the Premier League era, the three-time title winner remains arguably the most crucial component of Pep Guardiola’s side as they bid for further success.

Not bad for a Chelsea flop, eh Merse?

Read Also – Top of the Pops: Counting down 10 of our favourite 90’s PL goals