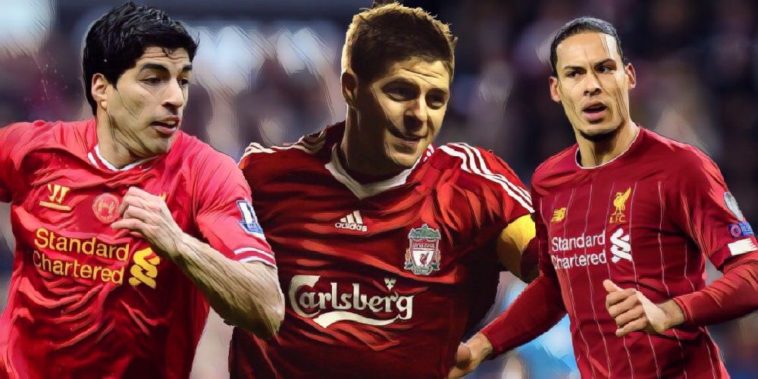 It’s been quite the decade for one of English football’s biggest clubs, Liverpool were on the brink of administration ten years ago with the likes of Paul Konchesky and Milan Jovanovic amongst their summer signings.

Fast forward to the present day and the club have rarely been in a stronger position, runaway leaders at the top of the Premier League and closing out the decade as European champions under the guidance of Jurgen Klopp.

Throughout the highs and lows there has been no shortage of talent at Anfield, and we’ve decided to compile our dream XI.

Here is the Football Faithful’s Liverpool Team of the Decade…

Liverpool would begin the decade with the popular and long-serving Pepe Reina in goal and whilst the Spaniard was a quality goalkeeper at his peak, there can be no denying the impact Alisson has had since replacing the hapless Loris Karius in 2018.

Signed in a then world-record deal for a goalkeeper, the Brazilian number one has proved worth every penny, leading the Premier League for clean sheets last season to win the division’s Golden Glove award.

He would play a key role in the Reds Champions League success, no moment more crucial than his brilliant late stop to deny Napoli’s Arek Milik in the group stage and secure Liverpool’s qualification, before again impressing in the final itself as the Klopp’s men won Europe’s biggest prize.

There are few things football fans enjoy more than seeing one of their own come through the ranks, and in Trent Alexander-Arnold Liverpool have a Scouser as gifted as any seen in recent generations.

The West Derby-born youngster has quickly established himself in the first-team in the past few seasons, flourishing into a talent many regard amongst the finest in his position in world football.

Alexander-Arnold’s delivery from wide areas and passing range has added a new dimension to Liverpool’s style of play, the academy graduate breaking the record for most assists by a defender in a single Premier League season last term.

Still just 21-years-old he has plenty of room to develop further, which may even see him introduced to a midfield role in coming seasons. A certainty to feature in this side, Alexander-Arnold is future captain material.

Read: Players with most assists in a single Premier League season

Liverpool fans might wonder where Jamie Carragher’s place is in our Team of the Decade, though the former club great would play for just four seasons in the past ten, never finishing above sixth and winning just a solitary League Cup.

By comparison, Joel Matip has emerged from a bit-part player and understated presence to first-choice partner for Virgil van Dijk at the heart of the Liverpool defence, his performances during the club’s run to Champions League success last season even outshining those of his more illustrious partner in the eyes of some fans.

Signed on a free transfer from Schalke three years ago, he has proven to be one of the club’s best pieces of business in modern times.

It would take a world-record fee for a defender to prize the Dutch defender away from Southampton, but any doubters over the cost were soon removed following a series of outstanding performances.

Van Dijk would have a transformative effect on a once leaky rearguard, helping the club to a Champions League final in his first few months at the club.

That showpiece would ultimately end in defeat to Real Madrid, though the club regrouped and came back stronger with Van Dijk at the heart of it.

His performances helped Liverpool to the Premier League’s best defensive record and saw him named as the PFA Player’s Player of the Year, whilst the club were crowned champions of Europe after beating Tottenham in their second successive Champions League final.

Van Dijk would be named as Man of the Match in that final and was later crowned as runner-up for the Ballon d’Or, his position as the best centre-back in world football rarely disputed in recent times.

No surprises here once again, Robertson an unheralded signing from relegated Hull City who has gone on to become arguably the best left-back in world football.

Like Trent Alexander-Arnold on the opposing side, Robertson’s relentless energy and superb delivery from wide have made him a fundamental cog in Jurgen Klopp’s winning machine.

The 26-year-old is amongst Liverpool’s chief goal providers, whilst he is sound defensively and rarely troubled by even the strongest of opposition wingers.

A huge fan’s favourite at Anfield, he is likely to play a huge role in the club’s potential future success.

Regarded by many as the greatest footballer to have worn the red shirt, Gerrard earns his place in our midfield courtesy of his final seasons as a Liverpool player.

Having captained the side to League Cup success he would play a crucial role in the Reds’ title challenge in 2014, his contribution in scoring 13 goals from midfield often overlooked due to that costly slip against Chelsea.

Gerrard would make over 200 appearances for the club over the past decade and score 66 goals, calling time on his glittering Anfield career by joining MLS side LA Galaxy in 2015. A real life Roy of the Rovers during his time at his boyhood side, Gerrard would feature in any Liverpool side of any era.

Read: 10 of the best quotes about Liverpool legend Steven Gerrard

It’s been quite the story for Jordan Henderson at Liverpool.

Signed as a promising young talent from Sunderland in 2011, he would endure a difficult start to life on Merseyside and found himself deemed surplus to requirements by Brendan Rodgers, even being touted as a makeweight in deal for Fulham’s Clint Dempsey.

The midfielder’s dedication and attitude would pay dividends though as he battled his way back into contention, playing a crucial role in the club’s title challenge in 2014 before being named as Steven Gerrard’s successor as captain.

He has continued to play an influential role and adapted under the Jurgen Klopp regime, skippering the side to two Champions League finals, winning the latter and the UEFA Super Cup.

Underrated and under-appreciated by those outside of Anfield, Henderson has been a fine servant to the club over the past decade.

Coutinho’s Anfield exit may have dented his reputation somewhat with the club’s fans, though there was good reason the Liverpool support were so hurt following his departure.

The Brazilian would spent five seasons on Merseyside and evolve from promising young talent to world-class star, producing several moments of magic and a highlight reel the envy of any player in Premier League history.

Blessed with technical brilliance and ability to produce something out of nothing, Coutinho’s penchant for the spectacular made him a huge hit and eventually attracted the interest of Barcelona.

He would score 54 goals in. 201 appearances, being named as the club’s Player of the Season on two occasions.

An easy choice to select for our position at right-wing, Salah has made a huge impact since his arrival from Roma in 2017. His debut season would see him smash a whole host of goalscoring records, his 32 league goals a record for a 38-game Premier League season and seeing him scoop a PFA Player’s Player of the Year and Football Writer’s Footballer of the Year double in addition to the division’s Golden Boot.

That Golden Boot would be retained the following season, whilst he would also help Liverpool to Champions League success, scoring the opener from the penalty spot against Tottenham in the final.

The Egyptian has plundered 82 goals in just 125 appearances in a red shirt, that total sure to increase in the coming seasons.

Taking his position on the opposite flank is Sadio Mane, the Senegalese superstar having elevated his game season upon season since his arrival as Klopp’s first big-money signing in 2016.

Since then Mane has scored 72 goals in 145 appearances for the club, winning a share of the Premier League’s Golden Boot last season and twice being named in the PFA Team of the Year.

His electric pace and unrelenting work-rate have made him essential to Klopp’s style of play in recent seasons, helping implement Liverpool’s pressing style and increasing his goal threat with each year.

His performances over the past year saw him finish fourth in the Ballon d’Or for 2019, Mane developing into a talismanic figure for the club in recent times.

Leaving out Roberto Firmino and failing to complete Liverpool’s current and formidable front three was a difficult decision, but there can be no arguing Suarez’s position in our Team of the Decade.

Signing from Ajax in 2011, the Uruguayan would initially adapt slowly to life in English football before establishing himself as one of the greatest forwards the Premier League has ever seen.

His campaign in the club’s title-challenging season of 2013/14 is regarded as one of the greatest individual season’s in the competition’s history, Suarez scoring 31 league goals in just 33 appearances to complete a clean sweep of individual accolades at the season’s end.

That would ultimately prove his last season as he headed to Barcelona, moving to Spain with a record of 82 goals in 133 appearances and countless moments of genius to savour.