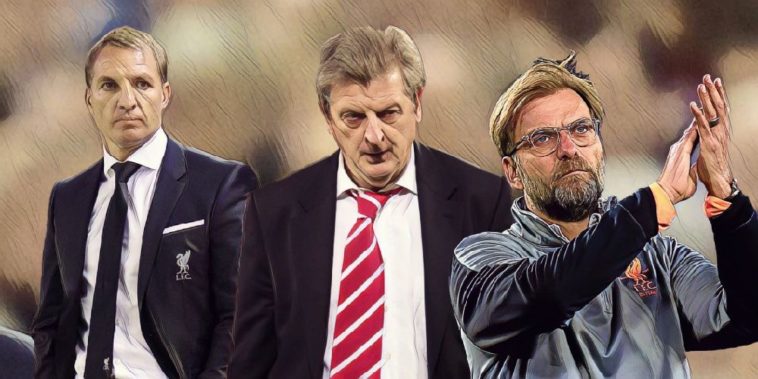 Jurgen Klopp has further etched his name into Liverpool folklore after guiding the club to a first league title in three decades, the Reds crowned as Premier League champions on Thursday following nearest challengers Manchester City’s defeat to Chelsea.

The former Borussia Dortmund boss arrived at Anfield in 2015 and has improved his side season upon season, winning the club’s sixth Champions League title last season before finally ending a long wait for domestic success.

Klopp was already an iconic figure in Liverpool’s history even before his silverware laden spell which only looks like continuing in the coming seasons, the Reds seemingly primed for a sustained period of success.

The charismatic German is, in fact, Liverpool’s eighth manager of the Premier League era, so we thought we’d take a look at each one of the Anfield outfits previous bosses, and it’s fair to say they’ve had varying degrees of success…

The story of a fallen former hero, Souness returned to Liverpool as manager following Kenny Dalglish’s shock resignation just before the dawn of the Premier League in 1991.

The club’s former captain had enjoyed an impressive beginning to his managerial career, winning three league titles at Rangers, but his spell in charge at Anfield is remembered for being the end of the club’s dominance of English football.

Critics of Souness often point to his attempt to change too much too quickly, as he ushered seven players out of the door during his first year in charge. However, Liverpool were in need of a rebuild, it’s just Souness got it all wrong.

The likes of Peter Beardsley and the promising Steve Staunton were amongst those allowed to depart, replaced by players who were not up to the level required. Poor recruitment and a lack of essential management qualities ultimately resulted in Liverpool’s rapid decline, perhaps the only positive of Souness’ reign his blooding of academy youngsters such as Robbie Fowler, Steve McManaman, Jamie Redknapp and Rob Jones.

Likeable and a Liverpool man through and through, Roy Evans turned his hand to coaching on the recommendation of the great Bill Shankly and began his ascent through the ranks to the top job.

Having coached under Shankly, Bob Paisley, Joe Fagan, Kenny Dalglish and Souness, Evans was appointed as the club’s new manager following the latter’s resignation in 1994.

With young starlets such as Fowler and McManaman flourishing alongside established names in Ian Rush and John Barnes, Liverpool won the League Cup in 1995 before losing the FA Cup final the following year.

Despite signing Stan Collymore in a British transfer-record deal and overseeing the emergence of a young Michael Owen, Evans was unable to take the club to the next level despite finishing in the division’s top four in each of his seasons at the club.

With Liverpool struggling to make the step-up, Gerard Houllier was appointed alongside Evans in a bizarre joint-managerial role rarely seen at the top level, before Evans later resigned to leave the Frenchman in sole charge.

The popular Frenchman who sparked optimism that Liverpool could return to the elite, Houllier’s exciting young side at the turn of the millennium is one of the most memorable Reds teams from the Premier League era.

Liverpool steadily progressed in each of Houllier’s first three seasons, finishing fourth, third and then second as hopes raised of securing a first Premier League title. Whilst that would ultimately never come to fruition, the second of those seasons will live long in the memory for Liverpool supporters.

Houllier guided the side to a remarkable treble of cup triumphs, his side inspired by the goals of Michael Owen and an emerging Steven Gerrard to secure FA Cup, League Cup and UEFA Cup success in 2000/01.

The downfall of Houllier’s reign came in the summer of 2002, when after finishing runners-up the previous season, Liverpool got their transfer activity spectacularly wrong as they attempted to go one better.

The decision to sign El-Hadji Diouf over the on-loan Nicolas Anelka looks even more wildly bizarre in hindsight, whilst the likes of Salif Diao and Bruno Cheyrou endured entirely forgettable Anfield careers.

Those mistakes saw Liverpool start to go backwards once more, finishing fifth and fourth in each of the next two seasons before the hierarchy once again decided on change.

Benitez’s start to life at Liverpool was made more difficult by Michael Owen’s summer departure to Real Madrid, though the additions of compatriots Xabi Alonso and Luis Garcia proved inspired.

Whilst he struggled to make much of an impact in the Premier League in his debut season, Benitez instead delivered one of the club’s most memorable European campaigns. Rank underdogs, Liverpool marched through to a first European Cup final in 30 years.

That final proved one of the greatest in the competition’s history, Benitez’s side coming from three goals down at half-time to beat AC Milan on penalties in Istanbul, cementing his place in Liverpool history.

During his six seasons at the club Benitez secured FA Cup and UEFA Super Cup success, establishing Liverpool as a leading side in European competition by reaching a second Champions League final in 2007 and a semi-final the following year.

Bolstered by signings including Javier Mascherano and Fernando Torres, Liverpool came close to winning the title in 2009, once again finishing runners-up. That proved to be the beginning of the end for Benitez, however, as problems with the club’s ownership and loss of key players saw the Reds slump to a seventh-placed finish the following season.

Rewind back to 2010 and it was dark times for Liverpool Football Club. American duo Tom Hicks and George Gillett had taken the club to the brink of administration, a series of broken promises, poor decisions and failed gambles leaving one of English football’s great clubs on the verge of ruin.

Their appointment of Fulham manager Roy Hodgson further set the club back, the veteran coach having endured a nomadic career without success at the very highest level.

Hodgson’s first summer saw him recruit the likes of Milan Jovanovic, Christian Poulsen and Paul Konchesky, each of whom showed no signs of being at the standard required.

He further antagonised his own support with a series of ludicrous soundbites that would come to be known as ‘Royisms’, including describing a 2-0 derby defeat as the club’s finest performance of the season and refusing to rule out selling star forward Torres to arch-rivals Manchester United.

Unsurprisingly he lasted just half a season, sacked in January 2011 with few sad to see him go.

The return of the ‘King’ as he’s known amongst Liverpool fans, the ever-popular former player and manager returned to help revive the mess the club’s hierarchy had created.

Like many of his predecessors, his recruitment was a mixed bag, Dalglish’s first window in charge saw the arrival of Luis Suarez, though that move came in addition to the then club-record £35m transfer of Andy Carroll as Fernando Torres left for Chelsea.

He led Liverpool to both domestic cup finals during his first months in charge, winning one and losing the other, though the club continued to struggle in the Premier League.

He was dismissed at the end of the 2011/12 season, having overseen a difficult period for the club and ending a six-year wait for a major trophy.

Dalglish’s departure saw the arrival of a young coach with a seemingly fresh approach, as Brendan Rodgers made the step up to one of English football’s biggest clubs after a successful period at Swansea City.

Rodgers arrival would see an entertaining brand of football return to Merseyside, though the young manager often showed naive tendencies during his time in the Anfield dugout. After a seventh-placed finish in his first season, the Northern Irishman came as close as anyone to ending the club’s title drought, as a Luis Suarez-inspired side finished runners-up in 2013/14.

The campaign proved one of the most entertaining in Premier League history, Liverpool’s strike partnership of Suarez and Daniel Sturridge finishing as the division’s top two scorers, ably supported by the likes of Steven Gerrard and Raheem Sterling.

However, the club’s swashbuckling style and 101 league goals was not enough to deliver the ultimate prize, narrowly pipped to the title by Manchester City following Gerrard’s now infamous slip against Chelsea.

Suarez’s subsequent departure and the poor investment of his £75m fee set Liverpool back once more, Rodgers sacked in 2015 after a sixth-placed finish the following year.

A talented manager who perhaps took the job too soon, Rodgers’ recruitment was also a major factor to his undoing as Liverpool boss.

The current occupant of the Liverpool hotseat, the popular German has transformed Liverpool from nearly men into one of Europe’s finest sides.

His tenure may have begun slowly as he adjusted to life at the club, but Liverpool have undoubtedly showed sustained and significant progression in each of Klopp’s seasons in charge.

Having suffered agonising defeats in the League Cup, Europa League and Champions League finals, Klopp delivered his first piece of silverware last season as Liverpool returned to the Champions League final for a second successive year, beating Tottenham in June’s showpiece event to be crowned champions of Europe for the sixth time.

The rise and rise of Liverpool under Jurgen Klopp… 🔴 pic.twitter.com/GiJ7IqHfAe

Working alongside sporting director Michael Edwards and a series of specialist coaches, the club’s staff have got little wrong in the transfer market in recent seasons and look equipped for a period of sustained success.

Klopp’s missed out on the title last season despite earning a club-record 97 points, before the Reds’ ‘mentality monsters’ bounced back in stunning style to enjoy a record-breaking Premier League campaign to be crowned as champions.

Liverpool’s near-flawless campaign has seen the club finally clinch the Premier League title with a record seven games to spare, with a whole host of records including most wins and most points firmly in their sights.

The German has embraced the city of Liverpool and respected the traditions of its famous club, his name now forever synonymous as the man who delivered the Holy Grail.