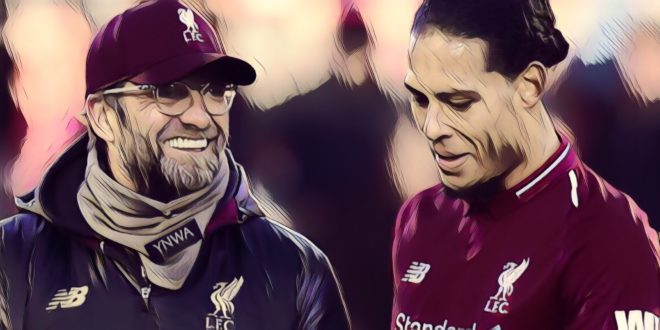 Harry Diamond 06/08/2019 Five of the Best, Opinion/Features Leave a comment

Jurgen Klopp delivered his first piece of silverware at Anfield by guiding Liverpool to Champions League success in 2019, after a gradual four years of improvement on Merseyside.

Having replaced Brendan Rodgers with the club languishing in 10th in October 2015, Klopp has helped re-establish Liverpool amongst Europe’s elite with back-to-back Champions League final appearances and a record Premier League points total.

The first big-money signing of Klopp’s first summer in charge, the German decided to buy Senegalese forward Mane from Southampton in a deal which could potentially rise to a club-record fee.

The attacker had enjoyed an impressive two seasons at St Mary’s, scoring 21 league goals in 67 appearances since joining from Red Bull Salzburg and was the fifth player since 2014 to swap the South Coast for Anfield.

Klopp had eyed a move for Mane whilst manager at Borussia Dortmund, and now with greater financial power was able to secure a deal for a player he had tracked for some time.

A stunning debut goal at Arsenal was a sign of things to come, being named the club’s Player of the Year after scoring 13 Premier League goals in his first season.

From there, Mane has continued to improve, with 2018/19 his finest season to date. A haul of 22 league goals earned him a share of the Golden Boot, whilst he was named in the PFA Team of the Year for the second time in his three seasons at Anfield.

When Klopp decided to splash £34m on a player who had previously enjoyed an underwhelming two-year spell at Chelsea, more than a few eyebrows were raised on Merseyside.

Klopp had seen the Egyptian mature during a spell in Italy and two years later no one is doubting his judgement now.

Injury in the 2018 Champions League final was a sad way to end a stunning year, however, he followed it up with another impressive campaign.

He remains, alongside Mane and Roberto Firmino, part of arguably Europe’s most potent forward line.

Perhaps one of the most unheralded signings of the Klopp-era, though one that will go down as one of his very finest.

When Liverpool secured an £8m deal to sign Scotland left-back Robertson from relegated Hull in 2017, there were not many fans who thought he would become a first-team fixture.

After a slow start to life at the club, injury to Alberto Moreno gave Robertson his chance and he has not looked back since.

A firm fans’ favourite at Anfield due to his relentless work-rate and tireless displays, Robertson has established himself as one of Europe’s leading full-backs whilst also providing a constant supply of fine deliveries from the left-hand side.

Once a problem position for Liverpool, their current left-back is now one of the very first names on the team sheet.

Few signings in recent memory have had as transformative an effect on a side as Liverpool’s capture of Dutch defender Virgil van Dijk.

Having failed in their pursuit of the Southampton centre-back in the summer, Liverpool returned and paid a world-record £75m to secure him in the winter window.

Many questioned the fee, though Van Dijk has helped transform a once fragile defence into one of the club’s greatest strengths.

Named PFA Player of the Year and a Champions League winner in his first full season, Van Dijk is a commanding presence who helps those around him improve.

Remarkably, he has not been dribbled past once in his first full season at the club, helping Klopp’s side to the Premier League’s best defensive record.

Goalkeeper had been a long-standing issue for Liverpool, with the club having failed to adequately replace Pepe Reina since the Spaniard’s departure in 2014.

Simon Mignolet and Loris Karius had failed to convince, and the latter’s Champions League final shit-show against Real Madrid persuaded Klopp to sign Roma’s Alisson for a then world-record fee for a goalkeeper in 2018.

The Brazil international has brought presence and confidence to the Liverpool backline, keeping a league-high 21 clean sheets to win the Premier League’s Golden Glove in his debut season.

One year on from Karius’ blunders in Europe’s showpiece, Alisson was arguably man of the match in Liverpool’s Champions League final win over Tottenham, justifying Klopp’s decision to spend big on a new number one.

Here’s a pitch to have David Ginola included in the best XI never to win the Premier League title. ?

Check out the full pod below to see if he made the cut, it's some team! ?https://t.co/yp6hTR8Dmw pic.twitter.com/n91fEZYyrN