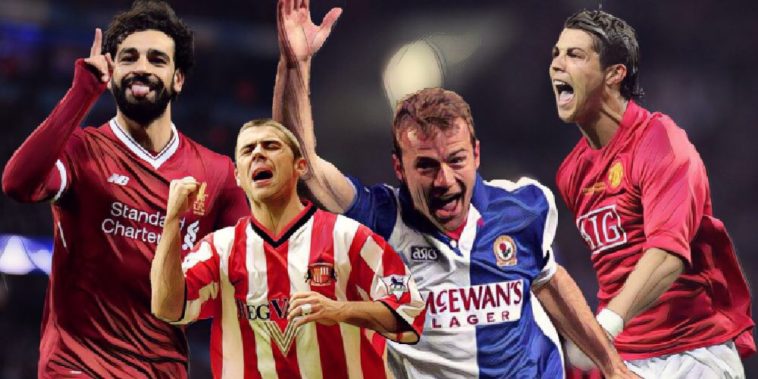 Goals win games and a prolific centre-forward is worth their weight in gold in football.

The Premier League era has seen its fair share of great goal-getters, but only a select few have reached the fabled landmark of 30 league strikes in a single campaign.

We’ve decided to look back through the archives at the division’s most lethal forwards, with the nine players to have scored 30+ goals in a single season…

Perhaps the most surprising name on this list, but having fired Sunderland to promotion the previous season, Phillips made an immediate impact on the Premier League by winning the Golden Boot in his first season in the top flight.

Phillips’ goals helped Peter Reid’s newly-promoted side to a seventh-placed finish, whilst his 30 league goals earned him the prestigious European Golden Shoe as the continent’s top scorer.

He remains the only Englishman to have won the accolade.

Henry’s goals helped Arsene Wenger’s side secure the league title after a historic unbeaten campaign, his outstanding performances rewarded by being named the PFA Player’s Player of the Year and FWA Footballer of the Year for the second successive season.

The season was also the first of three consecutive Golden Boots for Henry, his overall tally of four awards the most in Premier League history.

Having developed from troubled but talented winger into one of the Premier League’s leading forwards, Van Persie enjoyed the best individual season of his career in his final campaign at Arsenal.

Promoted to club captain following Cesc Fabregas’ departure to Barcelona, Van Persie fired 30 goals in a stunning season which saw him claim a PFA Player’s Player of the Year and FWA Footballer of the Year double.

He would leave Arsenal that summer for rivals Manchester United, where he would win a second successive Golden Boot in a title-winning campaign at Old Trafford the following season.

Bursting onto the scene in 2014/15 with 21 goals for Tottenham, there were some who labelled the now England captain as a potential ‘one-season wonder’.

Hauls of 25 and 29 in the next two seasons dismissed that notion, before Kane smashed 30 league goals for the first time in 2017/18.

Remarkably, Kane’s tally was not enough to secure a third consecutive Golden Boot, only the second time a player has hit the landmark and failed to win the accolade.

The Premier League’s all-time leading goal scorer reached the 30 landmark for the first time in 1994, having seen his first full season at Blackburn interrupted by injury the previous year.

Shearer’s goals were not quite enough to fire Blackburn, backed by Jack Walker’s millions, to the league title, the Lancashire side finishing runners-up to Manchester United.

Shearer’s 1993/1994 tally was also the first season a player scored 30 league goals and failed to win the Golden Boot.

A second feature on this list for the Geordie goal-getter, who fired 31 goals in just 34 games in his final season as a Blackburn player.

Shearer’s record haul of 260 Premier League goals is largely down to a prolific run in the mid-nineties, the forward the only player in EPL history to have scored more than 30 goals in more than one season.

Cristiano Ronaldo’s transformation from skilful ‘show-pony’ into one of the world’s leading players was complete by 2007/08, when the Portuguese superstar scored 31 goals as United won a second successive Premier League title.

Ronaldo finished the campaign with 42 goals in all competitions, including a vital header in United’s Champions League final victory over Chelsea.

His stunning season saw him claim a PFA Player’s Player of the Year and FWA Footballer of the Year double, before winning the first of his five Ballon d’Or’s later that year.

One of the Premier League’s finest individual campaigns, Luis Suarez’s plundered 31 league goals as Liverpool narrowly missed out on the league title in 2014.

Having missed the opening games of the season through suspension after biting Chelsea’s Branislav Ivanovic, Suarez returned in inspired form and scored 31 goals in just 33 games for Brendan Rodgers’ side.

In prolific tandem with Daniel Sturridge, Suarez scored a series of stunning goals along the way, Liverpool being narrowly pipped to the title by Manchester City.

Suarez was rewarded for his displays with a PFA Player of the Year and FWA Footballer of the Year double, adding to his Golden Boot and European Golden Shoe.

Liverpool’s decision to spend £36m on bringing Mohamed Salah back to the Premier League was questioned by some, the Egyptian winger having struggled to make an impact during a previous spell at Chelsea.

Those doubts were soon removed, as Salah embarked on the most prolific 38-game season in the division’s history.

A goal at Watford on his debut was a sign of things to come, with Salah continuing to score at a prolific rate and send records tumbling.

No player has ever scored more since the league’s change to a 20-team division, Salah’s remarkable run culminating in a clean sweep of the Player of the Year awards at the season’s end.

The joint-record for a Premier League season, Newcastle forward Andy Cole hit 34 goals during the 1993/94 season. Then a 42-game competition, Cole’s goals fired newly-promoted Newcastle to a shock third-place finish, with the forward being named as the PFA Young Player of the Year.

Remarkably, Cole also finished as the season’s top assist provider, in a stunning individual campaign for the then 22-year-old.

Cole’s tally was part of a career that saw him hit 187 Premier League goals, the third-highest total in the division’s history.

A third appearance on our list for the Premier League’s all-time record goalscorer, in a season which saw him fire Blackburn to the league title.

Having helped Blackburn to their title triumph, the forward was also rewarded with the PFA Player of the Year award, the first of two he would win during his memorable career.