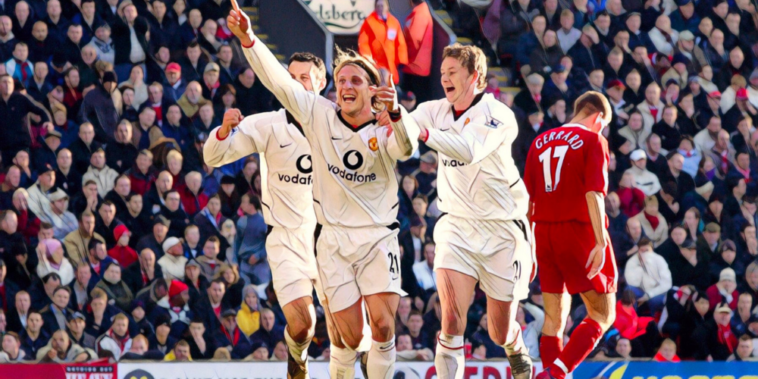 On almost every visit to Anfield in recent memory a chorus of Manchester United fans can be heard signing the praises of Diego Forlan, a footballer who earned cult status despite his struggle for success at Old Trafford.

Making a decisive contribution in the Premier League’s biggest fixture can change a player’s standing and Forlan’s match-winning moment at Liverpool is one etched into the rivalry of English football’s most successful sides.

For Forlan it was the zenith of a Manchester United career that failed to reach the heights it could – and perhaps should – have, with the Uruguayan often toiling during his time with the Red Devils and a one-time Premier League punchline.

Having attracted interest from Europe after a record of 40 goals in 91 appearances for Independiente, Forlan had looked set for a move to Middlesbrough before a late intervention from the Premier League’s dominant force.

As both Andy Cole and Dwight Yorke edged towards the exit door, a more lucrative proposal arrived from Sir Alex Ferguson and saw Forlan snub Teeside to head to the Theatre of Dreams.

Forlan arrived in the January of the 2001/02 season, a campaign which saw United struggle to replicate the success of the seasons that proceeded it.

Struggling for regular first-team football in the presence of Ruud van Nistelrooy, Ole Gunnar Solskjaer and Paul Scholes, he waited almost two months before his first start at Tottenham.

It ended without a goal after some wasteful finishing – including a miscue when one-against-one with the goalkeeper – and he failed to break his duck in 18 appearances as the Red Devils ended without silverware for the first time in over a decade.

Forlan had failed to fire, but his unrelenting persistence and exuberance in chasing lost causes had endeared the struggling striker to his new side.

He opened the following campaign with another goalless run, before scoring his first Manchester United goal with a late penalty in a 5-2 thrashing of Maccabi Haifa in the Champions League.

Whilst not quite the lift-off he would have wanted for his career in Manchester, it was nonetheless a sense of huge relief for a young forward desperate to succeed.

His first Premier League goal came a month later against Aston Villa and that was followed with his soon-to-be signature shirt-off celebration.

It was one he repeated after a brilliant late winner against Southampton in the following game as Forlan memorably – and comically – struggled to redress himself as the game continued around him.

Ripped his shirt off after a scoring a screamer vs Southampton. Couldn’t get it on again. Ended up playing skins in a Premier League game.pic.twitter.com/xDw2iC1UNL

Forlan’s goals had helped lessen the narrative of a South American struggling with the demands of English football, having found himself as a figure of fun in many media outlets at that time.

His true moment came on the first weekend of December however, as United made the much-anticipated trip to face Liverpool at Anfield.

Gerard Houllier’s side had finished the previous season above their great rivals for the first time in the Premier League era and not been beaten on Merseyside in almost 12 months.

On a sun-soaked afternoon at Anfield it was Forlan who would decide the game.

The teams had remained goalless in a tight contest for the first hour, with Fabien Barthez’s brilliant save having denied Milan Baros and Liverpool in the opening exchanges.

Whilst one goalkeeper was keeping his side in the game at one end, the other would have an unwanted role in the result with Forlan the most grateful of recipients.

Jamie Carragher’s tame backwards header was inexplicably fumbled by Jerzy Dudek, who allowed the ball to slip through his legs and provide Forlan with the simplest of tasks to turn home into the gaping goal.

After a Manchester United career of fluffed lines and bad luck, this was a gift from the gods on the biggest of occasions.

Deadlock broken, the game was decided just three minutes later. Ryan Giggs’ enterprising run through midfield created an opening, as the Welshman slid a pass into the unmarked Forlan.

Taking one touch to control and another out of his feet, his third confidently lashed the ball high inside Dudek’s near post as an anxious Anfield crowd was stunned into silence.

Forlan had taken 26 games to open his account for the club and had just three before the trip to Liverpool, a haul he almost doubled with a quick-fire brace at the Anfield Road End.

Sami Hyypia’s goal offered a response from the home side, but this was Forlan’s day and one that would etch his name into Manchester United folklore.

‘The one thing I really remember when I scored against Liverpool was after the game, when Gary [Neville] came to me and said: “You don’t know what you’ve done; you will be remembered for this for years,” Forlan later recalled, via the Metro.

‘That the fans still recognise this, you can see just what it means!’

For Forlan it was an afternoon in which all the hard work and sacrifice became worthwhile, enjoying the highest of highs after a testing time in England.

Low confidence and misfortune had hampered his time in Manchester United colours, but his double to down Liverpool had been eventual reward for a heart-on-his-sleeve footballer who ran himself into the ground whenever crossing the white line.

Forlan’s career with the club contained just 17 goals across three-and-a-half seasons, with a pair of late winners against Chelsea in league and cup among his other memorable moments.

He won both the Premier League and FA Cup before his eventual departure in 2004, as the arrival of Wayne Rooney spelled the end of his time at Old Trafford.

Few forwards with as modest a goal record as Forlan are remembered as fondly on the Stretford End, a willing runner with an endearing selfless style.

His exit proved the making of Forlan, however, as he realised his true potential following a switch to Spain. His first season with Villarreal saw him finish as La Liga’s leading scorer, winning both the Pichichi Trophy and European Golden Shoe.

Forlan won each of those accolades for a second time in 2008/09, after making the move to Atletico Madrid.

He proved a menace to Liverpool once again the following season as the teams met in the Europa League semi-finals, scoring a decisive winner in Madrid before netting again in the return as Atleti went on to win the trophy.

Forlan, fittingly, scored both goals in the final win over Roy Hodgson’s Fulham in Hamburg.

That summer the Uruguayan was also named as the World Cup’s finest footballer in South Africa, scoring five goals to finish as the tournament’s joint-leading scorer and win the Golden Ball.

He emerged as one of the best forwards of his generation after leaving Old Trafford, a rare instance of a player leaving the Red Devils and reaching greater heights.

For all his achievements post-Premier League, however, he will always be remembered in Manchester for just one afternoon in the Anfield sunshine.

Diego Forlan – the hard-working, hard-luck story who came from Uruguay and made the Scousers cry.