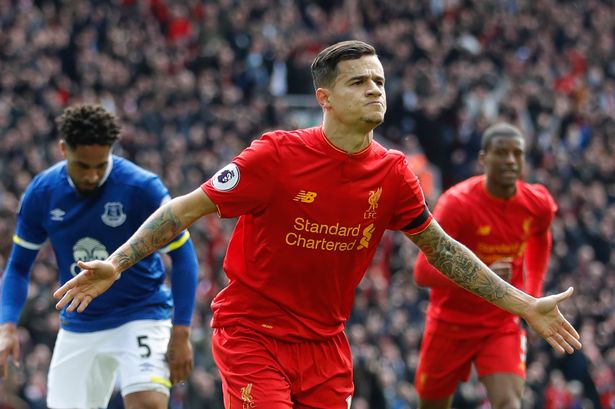 After a pathetic performance from Everton and not a great outing either from Liverpool, here are the 5 things we learned in 228th Merseyside Derby.

1. Everton are nowhere near top 4 quality.

The result of this game all but confirms that Everton are out of the race for the top 4. The question that now remains is were they ever good enough? I Believe the answer is a resounding NO!

With regular players such as Ashley Williams and Joel Robles playing so desperately poor against opposition who, may be in the top 4 but are not amazing in their own quality, it is obvious that Everton clearly aren’t ready to run with the “big boys” yet.

The two aforementioned players often left Phil Jagielka as the sole protection against goals which is appalling. Especially when yountake into consideration that he had only recently come back into the side after a string of poor performances in the earlier stages of the season.

2. Is it a surprise Ross Barkley can’t get a game for England?

Many Evertonians were finally looking forward to this game due to the recent performances of local lads Tom Davies and Ross Barkley. While Davies performed well enough in his role comparative to the team, it was Barkley who fans will rightfully be disappointed with.

Throughout the first half, he contributed nothing to the team’s play. He also began to commit stupid, sometimes disgusting challenges. Just because it’s a derby it doesn’t mean that you should just throw yourself into challenges.

Barkley should’ve been sent off and once again showed that he can’t do it against the bigger teams when the pressure is on. It’s fine playing well against Bournemouth and Hull, but when it comes to the big games Barkley, as well as a lot of his teammates, go missing.

3. If Lukaku wants to go to a “big club” he’ll need some luck

Once again like Barkley, Lukaku had another invisible performance.

I know it’s somewhat unfair as he didn’t get too much service, but the best of the best will make their own chances. Lukaku sees himself as one of the best.

If he wants a club like Real Madrid, Bayern Munich or even Chelsea to come in for him,he’s going to have to improve himself greatly. Otherwise he will be seeing himself on the bench regularly.

His level is Everton and it’s clear to see. Many players in bigger teams would not be afforded the grace he’s been given at Everton because they’d have 2 or 3 players of the same or near to the quality of their first choice. He either needs to improve and get his move or shut up and stay with Everton.

4. Injuries are no excuse for some of the performances

Yes everyone knows Everton have been dealt a massive blow with injuries over the international break. But that is no excuse for the way the players played.

Of all the injuries, fans were most hopeful of Coleman’s as his young deputy Holgate impressed at the start of the season. But the youngster had a bad game defensivel and only a marginally  better one offensively. However, his first duty should be to defend. Too many times he was at fault for giving away needless chances for Liverpool to pile on the pressure.

It was first appearance of the season for goalscorer Matthew Pennington, but he delivered an awful performance. Of course, he scored his first goal and while it was a great moment, it can’t detract from the fact that in some capacity, he was at fault for all three goals.

Surely at 22, he can’t be seen purely as a youngster anymore. Some of the defending and all around play was horribly bad. I really don’t think we’ll see him feature in an Everton shirt again after today. I don’t think too many fans would care either way.

5. The manager got it all wrong and should be blamed.

A rarity this season but it still does happen. The manager gets the whole game completely wrong.

Koeman made the decision to include the aforementioned Pennington. Once realising that this was a mistake, he should’ve taken action.

He should’ve sensed that after the first goal this wasn’t Pennington’s day and should’ve made a substitution.

Instead, he waited until the game was basically over to start making changes when everyone could see very early on what needed to be done.

Extra. This run has gone on too long

It’s been 18 years since Everton last won away at Liverpool. 18 years!

There are adult Evertonians who’ve never seen their team win at Anfield. This is a disgraceful record especially considering how poor Liverpool have become in that time.

That’s not the only issue, however. There’s a mentality around the club, a mentality of losers. It’s been over 20 years since Everton have won a trophy.

Another abysmal record for a self-described “big club”. It’s all good and well saying that Everton are the 4th most successful club in England. Congratulations. What good is it, though?

Forget history because it’s just that. History. There’s been a lot of talk over the last year, even from myself, that a sleeping giant is about to awaken. But once again we’re here with a loss to Liverpool and nothing has changed.

Obviously, there are things going on behind the scenes but that doesn’t matter, what matters is what’s on the pitch. Everton are always seen as “best of the rest” and that’s ok for some but it shouldn’t be for Everton.

If fans want to talk about history why can’t the club begin to make history?

The team needs to start winning these games for a start. Everton needs a cup win too because currently as stated before the mentality of the club runs right through to the players and they’re not ready to win yet. Ultimately these players need to decide if they want to be the

Ultimately these players need to decide if they want to be the “best of the rest” or simply just the best. Of course, we all know as fans, Nothing but the Best is Good enough.

We are currently looking for both Liverpool and Everton fans to write for Football Faithful. If you are interested in writing about your club, then please apply to join our rapidly expanding writing team.