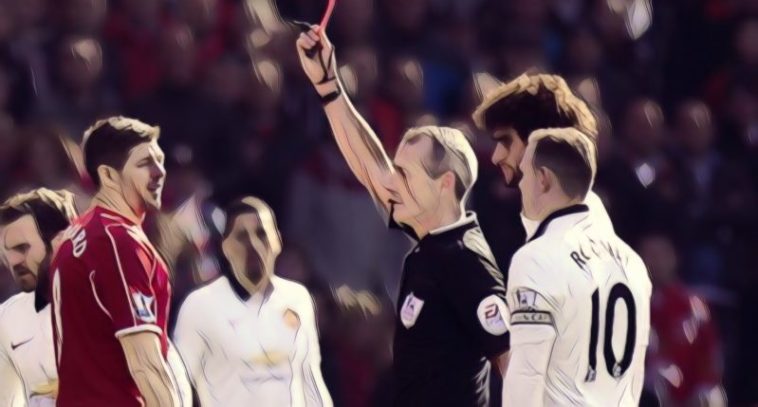 Whether a starter or substitute, players are keen to make an immediate impact on any game they play. Unfortunately for some, that impact isn’t always a positive one.

Self-inflicted or unfortunate, being sent off is the ultimate way to let down your teammates. Doing it in quick-fire fashion, however, is another matter entirely.

Alexandre Jankewitz was the latest player to receive the earliest of baths on Tuesday night, the Southampton teenager sent off less than two minutes into his debut as the Saints were on the receiving end of a 9-0 thrashing at Manchester United.

Following the youngster’s moment of madness we’ve decided to look through the Premier League archives and celebrate the fastest sendings off in the league’s history, blink and you’ll miss them…

Jankewitz will have dreamed about making his Premier League debut but his first appearance soon turned into a nightmare, the youngster’s enthusiasm resulting in a high and ugly challenge on Scott McTominay that saw him quickly given his marching orders.

There were just 79 seconds on the clock at the time of his red card, the 19-year-old becoming the fifth fastest player in Premier League history to be sent off and leaving Southampton with a mountain to climb at Old Trafford.

The undermanned Saints were ruthlessly exposed on what proved a humiliating evening, with Manchester United inflicting the joint-biggest defeat in Premier League history on the visitors after winning by nine goals to nil.

United became the first team in history to win two Premier League games by a 9-0 scoreline after also achieving the feat against Ipswich in 1995, whilst Southampton became the first to twice lose by nine goals after being thrashed by Leicester by the same scoreline in 2019.

Lasting just over a minute is former England international Tim Flowers. The goalkeeper was part of Kenny Dalglish’s title-challenging Blackburn Rovers side when he received his marching orders at Leeds in 1995. Flowers was penalised for a trip on forward Brian Deane, before being sent off after just 72 seconds.

Blackburn would somehow leave Elland Road with a point following a 1-1 draw, a point which would prove crucial as Rovers were crowned champions by that exact margin later that year.

Liverpool legend Gerrard’s final season at Anfield was one of disappointment, with reduced playing time as manager Brendan Rodgers planned for the future. His final fixture against fierce rivals Manchester United was also one to forget, with the Liverpool captain sent off just 38 seconds after coming on as a half-time substitute.

Full of aggression having been left out of the starting line up, Gerrard proceeded to clatter United’s Juan Mata before a stamp on Ander Herrera saw him dismissed by referee Martin Atkinson.

Speaking in his book which was serialised by the Daily Mail, Gerrard said of the incident: As I left the pitch I asked myself: ‘What have you just done? Are you f****** stupid?’

Liverpool would go on to lose the game 2-1.

The opening day of the 2007/08 Premier League season saw Reading face the daunting trip to face defending champions Manchester United at Old Trafford. With United struggling for forward options, the Royals battled to a commendable goalless draw, but not before striker Kitson had made their task even more difficult.

Just 37 seconds after coming off the bench, the forward launched into a tackle on Patrice Evra and was swiftly sent for an early bath.

Playing for Sheffield United against Reading in 2007, the winger was brought on as a substitute before being sent off just 12 seconds later.

The two had battled for promotion the previous season and their Premier League meeting was hostile as both competed to consolidate themselves as top-flight sides.

Jostling for position at a throw-in, Gillespie swung an elbow into the face of Reading’s Stephen Hunt right in front of the referee. Gillespie was duly sent-off, again pushing Hunt in the face as he left the field.

With play not technically having restarted since his introduction, it could be argued Gillespie was dismissed zero seconds after coming on.

Read: Ranking the 10 best Premier League players of the 2010’s