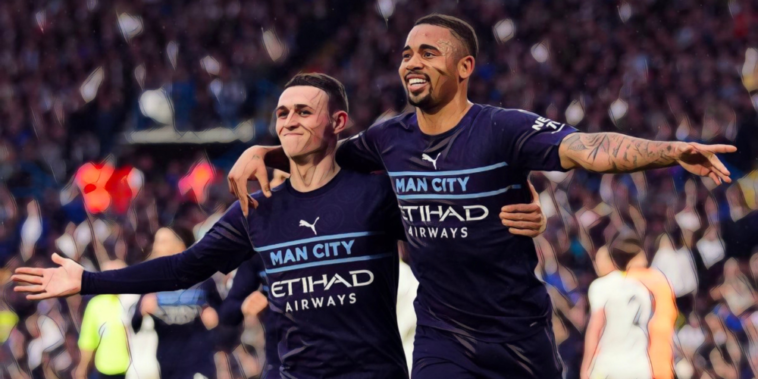 There’s much to play for at both ends of the table as we reach the season’s final fixtures, with the latest round of results tightening up the battles for the title, top four and Premier League status.

Dejan Kulusevski was left out of the Spurs side after two quieter performances in recent weeks, but the rest seemed to do the trick as the Sweden international came on to impress against Leicester.

Kulusevski drove forward to set up Son Heung-Min’s first goal of the afternoon, drifting inwards before threading a pass into the South Korean.

The January signing added a second assist to make it eight in the Premier League since arriving at Spurs from Juventus, with his record now 11 G/A in just 11 starts in English football.

Kane and Son remain the leading lights in this Tottenham team, but the arrivals of Kulusevski and the excellent Cristian Romero have provided a fine supporting cast on which to build around.

This is a team in transition but there are promising signs despite their current inconsistencies, with the 22-year-old Kulusevski having been a shrewd signing.

It was a bad weekend of results for Leeds who were dragged ever closer to the bottom three, a humbling 4-0 defeat to Manchester City – coupled with wins for Burnley and Everton – leaving Jesse Marsch’s side in real danger.

Leeds were outclassed at Elland Road with Junior Firpo struggling once again, the full-back having endured a difficult debut season in the Premier League.

Junior Firpo has now picked up 10 yellow cards this season, no Premier League player has more. He’s only made 16 starts.

No PL player who has played fewer minutes than Firpo (1,400) has picked up more than 7 yellow cards this campaign. pic.twitter.com/dAu5TXvUI7

Hopes were high that the former Barcelona defender could thrive at Leeds, but his performances have been below the standard required with his latest another sorry showing.

Firpo was cautioned inside the opening six minutes after pulling down Phil Foden and struggled to get to grips with City’s attacking talent, being dribbled past on five occasions and winning just 2/9 duels.

Burnley’s bounce has continued under u23 manager Mike Jackson, who has done a remarkable job since taking the reins from the sacked Sean Dyche.

Jackson has led Burnley to three wins and a draw from four games in charge, with the Clarets scoring twice inside the final seven minutes to turn defeat into victory at Watford this weekend.

What a job he’s done so far! 👏👏 pic.twitter.com/EheraSDo14

Burnley’s win saw them climb above Leeds in the race for survival and the momentum is with Jackson’s side as we reach the final fixtures of the campaign.

Dyche’s exit was greeted with surprise despite Burnley’s perilous position, but the caretaker boss has more than steadied the ship and a Clarets team increasing in confidence are in pole position to complete a miraculous escape.

Chelsea might just be looking over their shoulder after more dropped points this weekend, with a flat performance contributing to a 1-0 defeat to struggling Everton.

Cesar Azpilicueta was guilty of an error for the game’s decisive moment, the defender hesitant in possession in a dangerous area as Richarlison robbed the Chelsea captain on the edge of the penalty box.

Richarlison picks the pocket of Azpilicueta on the edge of his own area and cooly slots the ball past Mendy! 😎 pic.twitter.com/P0VEFoeDi4

Richarlison made no mistake to score the winning goal in an embarrassing moment for Azpilicueta, who later saw Jordan Pickford make a miraculous save to deny him redemption at the opposite end.

Onto that miraculous save… Jordan Pickford produced an outstanding moment of athleticism to ensure Everton earned a hard-fought 1-0 win over Chelsea.

The England international’s fine form has been somewhat hidden by Everton’s struggle for results in the Premier League, but he was at his best as the Toffees secured a precious three points this weekend.

Pickford’s save from Azpilicueta was arguably the most impressive seen in the Premier League this season, whilst he made another brave block from Antonio Rudiger to secure a well-deserved clean sheet.

Everton will need more performances of this calibre if Frank Lampard’s team are to escape from the division’s bottom.

Bruno Lage was critical of Wolves following a home humiliation this weekend, his Europe-chasing team beaten for the third consecutive Premier League fixture.

Wolves were second best as the Seagulls’ midfield trio of Yves Bissouma, Enock Mwepu and Moises Caicedo took charge at Molineux, with Brighton’s 3-0 win a scoreline that could – and perhaps should – have been greater.

🗣 "I think it was the worst performance since the first day."

Lage questioned whether his team had the drive to reach the next level and a run of four defeats from five games has halted their run towards European football.

Changes are expected in personnel this season and a new forward must be on the club’s agenda, with the expected sale of Ruben Neves set to raise significant funds.

Goals have been a problem throughout the campaign despite largely impressive results and a disappointing slump has threatened to undo much of the club’s hard work this season.

The 21-year-old has excelled in multiple roles for Manchester City and has promised world class levels in each, from operating as the club’s go-to false nine to tormenting full-backs out on the flanks.

Foden was handed a central role in the 4-0 win at Leeds this weekend and shone, finishing with two assists as the Premier League champions moved back to the top of the division at Elland Road.

Guardiola has suggested Foden could soon take a central role on a more regular basis with the ‘Stockport Iniesta’ having long been tipped to be David Silva’s long-term replacement.

Phil Foden has been directly involved in 2+ goals in 5 different games this season:

“He can play in all five positions up front: winger on both sides, striker through the middle and in the pockets like an attacking midfielder,” Guardiola said, as per mancity.com.

“I think in time he will be more capable to play in positions in the middle, he still has all the actions, the high speed, so maybe now the wide positions suit him better.

Norwich will once again be playing Championship football next season, as the Canaries inevitable relegation was confirmed with defeat at Aston Villa this weekend.

It continues a yo-yo existence for a club who have now swapped between the top two divisions in fourth consecutive campaigns.

The club’s decision to sell Emi Buendia – named as the Championship’s Player of the Year last season and the heartbeat of their promotion campaign – proved unwise even given his underwhelming impact at Aston Villa.

Devastated to be marking my 150th appearance for @NorwichCityFC with relegation..
We haven’t been good enough as a collective, especially in the games that mattered the most..

You win together and you lose together.. one team one city 💛💚🔰 #otbc pic.twitter.com/XXPTZVCIvf

Perhaps worse than that, however, was the reinvestment of the funds brought in as Norwich acquired a group of additions who have looked out of their depth and offer few assurances of a strong season in the second tier.

Even given their past pedigree, it will take some effort from Dean Smith to ensure the yo-yo finds its way back on an upward trajectory next season.