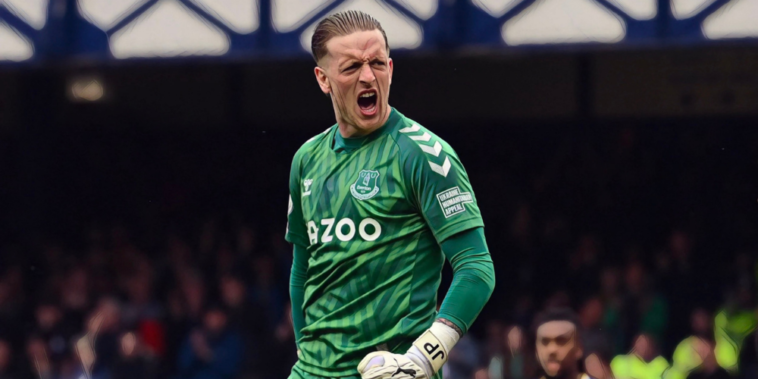 It was a huge weekend of results down at the bottom of the Premier League, as defeat for Leeds and wins for Burnley and Everton tightened up the division’s dogfight.

Everton’s win over Chelsea was seismic given the results of the previous day, though Burnley’s crucial comeback at Watford continued their momentum under interim boss Mike Jackson.

The Clarets will have targeted that clash as a must-win given the Hornets’ own perilous position, but found themselves a goal down with just seven minutes remaining at Vicarage Road.

Three minutes later and goals from Jack Cork and Josh Brownhill had completed a comeback win, one that moves Burnley – who have taken 10 points from 12 available since Sean Dyche’s departure – above Leeds.

Jordan Pickford might just have saved Everton’s season, with the England number one in outstanding form to earn his side a 1-0 win over Chelsea.

The Toffees were staring at the prospect of relegation after falling five points behind both Burnley and Leeds, but reduced the gap – whilst retaining a game in hand – after beating the West Londoners at Goodison Park.

Pickford made a series of stunning saves to preserve his side’s clean sheet, including a miraculous stop from Cesar Azpilicueta in which the goalkeeper scrambled across his goal-line to beat away the defender’s close range effort.

One of the best saves the Premier League has ever seen 👏 pic.twitter.com/e9WUUZZPqn

Another brave stop was taken full in the face from Antonio Rudiger and his display of agility keeps Frank Lampard’s side alive in the battle to preserve Premier League status.

His heroics could yet be the turning point in Everton’s fight against relegation.

Son Heung-Min closed the gap on Mohamed Salah in the race for the Premier League’s Golden Boot this weekend, scoring twice as Spurs beat Leicester.

The South Korean has now netted a career-best of 19 league goals this season after a double to down the Foxes in North London, his second a spectacular effort on his ‘weaker’ left side.

Son cut inside before bending home an unstoppable finish into the top corner and the 29-year-old remains the kind of talent that can fire Spurs towards a top four finish this season.

Son has now scored 10 goals with his left foot in 2021/22, a joint Premier League record for a right-footed player, matching the achievement of Tottenham teammate Harry Kane in 2017/18.

Has there been a better save in the Premier League this season?

Jordan Pickford’s brilliant stop from Cesar Azpilicueta was the highlight of Everton’s win over Chelsea, as the England number one provided a reminder of just why he remains Gareth Southgate’s undisputed first choice.

For a man often accused of lacking a clinical touch around goal, Gabriel Jesus has compiled quite the record when it comes to Premier League goal involvements.

The Brazilian has now provided 87 G/A in just 96 league starts for Manchester City, whilst only three players in the division’s history have ever scored or assisted in a higher percentage of their Premier League starts.

Bruno Lage pulled no punches when assessing his Wolves side this weekend, as the club’s concerning end of season form reached a new low against Brighton.

Wolves have now lost four of their last five Premier League games to damage hopes of European qualification and Lage’s side have failed to score in each of their last three games.

The Portuguese coach was critical of his team following this weekend’s 3-0 home defeat to Brighton, suggesting there could be changes at Molineux this summer as he looks to find a squad capable of reaching the next level.

“I need to understand who wants to go to war and put the club on a different level. I can lose plenty of times, but today was completely different. We didn’t learn anything from this game because we just watched Brighton play the game.”#WWFC | #Wolves pic.twitter.com/CieO6PabfS

Wolves were arguably the weekend’s worst performers after an emphatic home defeat to Brighton, with Bruno Lage’s side perhaps fortunate to have not lost by more than the 3-0 scoreline.

Willy Boly’s was a poor performance in a backline that struggled to cope with the Seagulls and it was the centre-back’s clumsy challenge on Danny Welbeck that led to Brighton’s second spot-kick at Molineux.

Wolves’ back three of Boly, Conor Coady and Romain Saiss failed to cover themselves in glory throughout and this was a showing the side will want to forget and move on from after a dismal defensive display.