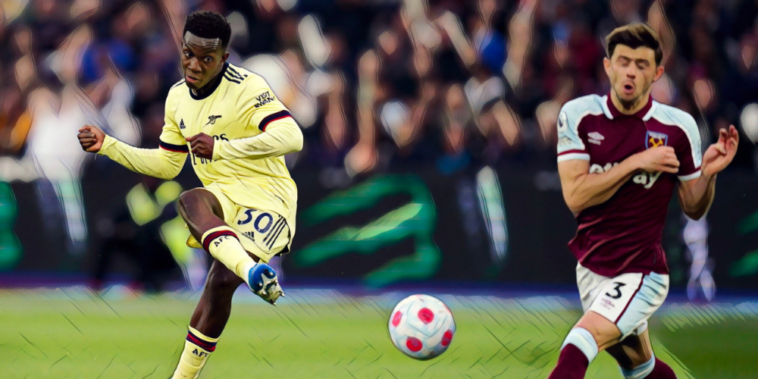 Romero emerging as one of Premier League’s best

Cristian Romero has proven a superb signing for Tottenham this season with the defender growing in stature and importance in North London.

Romero was excellent once again in Spurs’ 3-1 win over Leicester and has become a crucial component of Antonio Conte’s team, his aggressive and front-footed defending have caught the eye this season.

The Argentina international’s committed tackles led to Spurs’ second goal against the Foxes, crashing into consecutive challenges to regain possession in the build-up to Son Heung-Min’s first of the afternoon.

Still just 24-years-old and rapidly adjusting to the demands of the Premier League, he has the attributes to become an elite component of a Spurs team that has been lop-sided in attacking quality and over-reliant on Harry Kane and Son.

Romero’s arrival – alongside the January additions of Rodrigo Bentancur and Dejan Kulusevski – have provided an injection of quality into this side and this summer’s window shapes as a crucial one in the development of Conte’s project in North London.

Liverpool’s trip to in-form Newcastle shaped as a potential banana skin in their title challenge, coming in between their Champions League semi-final with Villarreal.

The short turnaround saw Jurgen Klopp rotate his team at St James’ Park and there was no doubt pre-game fears from the Reds support as an XI without Mohamed Salah, Trent Alexander-Arnold, Fabinho and Thiago Alcantara was named.

"The performance was outstanding, I have to say I absolutely loved it."

Much to the delight of punters using the brilliant titan bet, Liverpool battled to a narrow 1-0 win that leaves the club one point behind Manchester City, with those who deputised having impressed against the Magpies.

Naby Keita has found form and fitness to emerge as an invaluable asset to Liverpool this season and the Guinea international scored the game’s only goal with a fine individual effort.

James Milner and Joe Gomez also each came in after long spells on the sidelines this season and were among the Reds’ better performers as their Premier League challenge – one that has seen Klopp’s team remain unbeaten in 2022 – continued with another three points.

Eddie Nketiah’s future remains up in the air despite a renaissance for the Arsenal forward, who has been handed a long-awaited opportunity under Mikel Arteta in recent weeks.

The 22-year-old has started each of the Gunners last four league fixtures, with the most recent of those containing consecutive wins over fellow European contenders Chelsea, Manchester United and West Ham.

Eddie Nketiah had as many shots on target vs. West Ham as Alexandre Lacazette has had in his last nine Premier League games (4).

Nketiah scored twice in the win at Chelsea and despite failing to find the net this weekend was an impressive performer, his intelligent movement and work-rate posing problems for West Ham as the North Londoners earned a 2-1 win at their capital rivals.

Nketiah is out of contract at the end of the season and unwilling to sign a new deal without guarantees over first-team football, having featured for just 166 minutes in the Premier League before April 16.

Crystal Palace have long been linked with a summer move and the Eagles are unlikely to be the only Premier League rival interested, should Nketiah decide on a new challenge.

Aston Villa have struggled to find balance in the final third this season, with the summer arrival of Danny Ings having posed somewhat of a problem as the club look to find room for both the former Southampton striker and Ollie Watkins.

Watkins has more often been given the nod given his ability to bully and occupy defences singlehandedly, but Ings came off the bench this weekend to prove a point to Steven Gerrard.

A crucial contributor off the bench. 👏 pic.twitter.com/OjSBatKRR6

Introduced after Leon Bailey’s first-half withdrawal, he set up Watkins for the opener with a brilliant long pass in behind, before scoring with a sharp swivel and shot to double the home side’s advantage.

The 29-year-old also struck the bar with a header and showcased impressive link-up play with Watkins and Philippe Coutinho, a performance that has provided Gerrard with a further selection headache.

Jesse Marsch’s team were beaten in convincing fashion in a result that further damages their inferior goal difference, with just two points now separating the three teams scrapping desperately to avoid dropping into the Championship.

🗣 "I think the best performance of the night was our fans." 👏

Jesse Marsch believes it was not a 4-0 match but Man Cities quality took over pic.twitter.com/gsUC109nMu

The momentum appears to be with Burnley after 10 points from their last 12 available and the Clarets moved above Leeds with a comeback win at Watford this weekend.

Everton have struggled for consistency under Frank Lampard, but secured a shock win over Chelsea and recent results at Goodison bode well ahead of a winnable-looking run of games.

Leeds, meanwhile, face Arsenal (A) and Chelsea (H) in their next two.