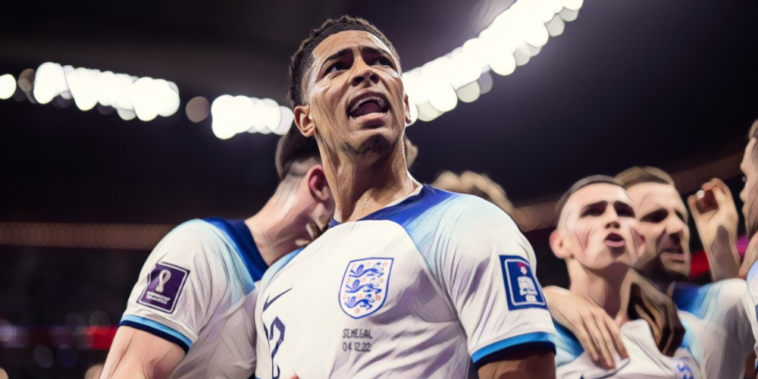 Jude Bellingham has captured the headlines during England’s World Cup campaign in Qatar, with the midfielder underlining his status as one of Europe’s most exciting talents.

The teenager has been an integral part of Gareth Southgate’s side at the tournament and produced a man-of-the-match performance against Senegal as England booked a quarter-final clash with France.

Bellingham’s rampaging displays have been a highlight of England’s campaign so far and we’ve decided to look at five youngsters who impressed for the Three Lions in past major tournaments.

Alan Ball made his England debut as a teenager after catching the eye of Alf Ramsey with his performances in a struggling Blackpool team.

Just over a year later, he was included in the Three Lions’ plans for the 1966 World Cup on home soil. Despite being the youngest member of the squad with just a handful of caps, Ball had a prominent role in England’s success as he added boundless energy and composure to the midfield.

He featured in four games at the tournament and started the final, where the imagery of Ball – socks near his ankles – running relentlessly in extra time was one of the most enduring of the final. Ball was involved in two goals as England won 4-2 to be crowned world champions, with Ramsey famously telling the midfielder “you will never play a better game in your life” after the win at Wembley.

Ball went on to win 72 caps for the Three Lions, scoring eight goals, and had the most successful spell of his club career at Everton, where he won the 1969/70 top-flight title.

The oldest player on this list, but the youngest of the England squad that travelled to Italy for the 1990 World Cup.

Gascoigne celebrated his 23rd birthday a month prior to Italia ’90, before shining at the finals. He had been named as the PFA Young Player of the Year in 1988, but faced a fight to make the England squad until an audition against Czechoslovakia persuaded Bobby Robson to include the midfielder in his plans.

In Italy, ‘Gazza’ went from rising star to England icon. Undaunted, Gascoigne played with a freedom rarely demonstrated at major tournaments with his unshackled brand of football and charming charisma at the centre of England’s run to the semi-final.

It was the first time the Three Lions had reached the last four since winning the World Cup on home soil and Gascoigne was influential to their success, assisting Mark Wright’s winner against Egypt and David Platt’s dramatic late goal against Belgium in the last 16. In the last eight, having conceded a penalty he then had a hand in two goals as England edged Cameroon.

Gascoigne’s tournament ended in infamous fashion with those tears in Turin. A yellow card agaisnt West Germany meant the midfielder would miss the final should England progress, with Gascoigne visibly upset as England crashed out of the competition on penalties. It became a moment stuck in English football history.

Owen’s 18 league goals were higher than any other member of England’s travelling party, but the 18-year-old had to be content with a place on the bench as Alan Shearer and Teddy Sheringham – the partnership which inspired the Three Lions to the semi-finals at Euro ’96 – led the line.

He became England’s youngest player at a World Cup as a substitute in the opening game against Tunisia, before scoring in the 2-1 defeat to Romania in the next game.

#OnThisDay 22 years ago, Michael Owen stepped out in an 🏴󠁧󠁢󠁥󠁮󠁧󠁿@England shirt for the first time.

A few months later, we all know what happened next… 🤩#WorldCup | @themichaelowen pic.twitter.com/ePGMrQpaFl

His impact off the bench saw Owen thrust into the starting side for the group decider against Colombia and he retained his place as England reached the last 16. Against Argentina, he scored one of England’s most iconic World Cup goals as his scintillating solo run and finish announced his arrival on the world stage.

England were eliminated on penalties following David Beckham’s red card, but Owen had proven he belonged at the top level. He ended the year named as BBC Sports Personality of the Year and was retrospectively voted as the World Cup’s Best Young Player, after the award was officially introduced in 2006.

English football was well aware of the talent Wayne Rooney possessed as the 2004 European Championship arrived. His meteoric rise had seen Rooney become the youngest ever Premier League goalscorer at that time with a stunning late winner against champions Arsenal, as the 16-year-old introduced himself to the division.

Just under two years later, Europe found out what England already knew. Rooney was a star, a footballer of incredible precocity and one ready to test himself against the world’s best.

Rarely has a teenager appeared as ready-made as Rooney, with the 18-year-old tormenting holders France in the opening fixture. Zinedine Zidane’s brace ultimately swung the game late on, but Rooney had troubled a team predicted to go deep into the tournament.

Lilian Thuram’s dismissive pre-game comments towards Rooney came back to haunt him as the Frenchman was rag-dolled by England’s fearless teenager. In the following games, Rooney exploded. He scored twice against Switzerland and twice more against Croatia, as England reached the quarter-finals.

Arguably the Player of the Tournament in the group stage, a metatarsal injury curtailed his campaign against Portugal in the last eight and England crashed out in the absence of their talisman. There remains a sense of what might have been had Rooney not suffered such cruel luck.

Jude Bellingham has shone in Qatar this winter, with the midfielder a key part of Gareth Southgate’s side at the World Cup.

Bellingham’s star has been on the rise ever since he became Birmingham’s youngest ever player at just 16. A move to Borussia Dortmund then accelerated his development and he became England’s third-youngest debutant in 2020.

The following summer he became the youngest player to appear for England at a major tournament, but featured for just 56 minutes as the Three Lions reached the final of the European Championship.

"What he's doing now, in a World Cup…I've not seen before, it's breathtaking!" 👏

The 19-year-old has now matured into an irreplaceable presence in the England engine room, a driving force in a side with genuine ambitions of being crowned world champions. Dynamic, powerful and with quality in possession, he has underlined his status as one of world football’s best prospects at the tournament.

He scored his first international goal during the 6-2 win over Iran, before producing a man-of-the-match performance as England eased past Senegal in the last 16. He was involved in each of the first two goals, with his bursts from midfield a feature of England’s front-footed approach.

It’s been a tournament to remember for Bellingham, who has added to his ever-increasing price-tag as Europe’s wealthiest clubs prepare summer bids. How far both he and England can go remains to be seen, with a quarter-final date with France the perfect test of his ability to dominate the biggest games.