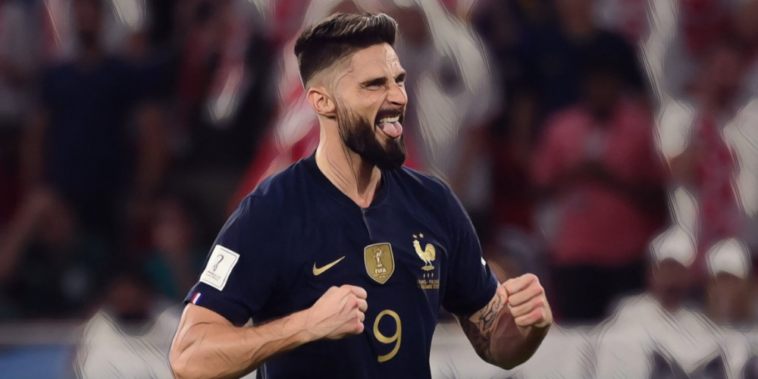 Olivier Giroud wrote his name in French football history this week with his 52nd goal for the national side.

Giroud opened the scoring during France’s 3-1 win over Poland and in the process became the most prolific goalscorer in Les Bleus’ history. The 36-year-old has been an under-appreciated figure for much of his club career, but has starred for the national side across the past decade.

Having won the World Cup in 2018, he is part of the side looking to defend the trophy in Qatar and now holds the status as France’s greatest goalscorer.

Karim Benzema is the fifth-highest goalscorer in the history of the French national team, a remarkable achievement given his six-year exile from international football.

Benzema made his debut for France as a teenager after bursting onto the scene at Lyon, and marked his first international appearance with a winning goal against Austria.

Sum up this goal in 1 word! 👇@Benzema | @FrenchTeam | #EURO2020 pic.twitter.com/qhfOFxlFEF

Benzema was recalled to the France set-up in 2021 and has scored ten goals in 14 appearances since his return. One of the greatest forwards of his generation, he is a five-time Champions League winner at Real Madrid and won the Ballon d’Or in 2022.

He has 37 goals in 97 caps, placing him ahead of David Trezeguet (34), Kylian Mbappe (33) and Zinedine Zidane (31) among France’s all-time leading scorers.

Michel Platini is not the most popular figure in football, with the disgraced former UEFA president’s post-playing antics having tainted the memories of his tantalising talent.

Arguably France’s finest ever footballer, Platini at is peak was the best player in Europe. Long before he delved into the world of sporting corruption, he was a midfielder who scored goals with effortless ease and who inspired Les Bleus to their first ever tournament success.

Platini’s performance at the 1984 European Championship is one of the greatest individual showings at a major finals, as he scored nine goals in five games – including back-to-back perfect hat-tricks, a late semi-final winner and the opener in the final – to lead France to the trophy.

He scored 41 goals in 72 appearances for France and was named as winner of the Ballon d’Or for three consecutive years between 1983 and 1985. Platini won the Capocannoniere (Serie A Top Scorer) in each of those years during a decorated career at Juventus, who he inspired to a first European Cup in 1985.

Antoine Griezmann has been one of France’s finest footballers of the past decade, a forward who has so often delivered on the big occasion for Les Bleus.

Griezmann starred during the 2016 European Championship on home soil, where he scored six goals to win the Golden Boot as France reached the final. Two years later, he was a key figure in France’s World Cup success in Russia.

He scored four goals at the tournament and was named as man-of-the-match as France beat Croatia in the final, with Griezmann scoring the champion’s second from the penalty spot.

Just two players have ever scored more than Griezmann’s 42 goals for Les Bleus, while only five players have made more than his 114 appearances. He is currently part of the squad in Qatar that are looking to become the first nation to defend the World Cup since 1962.

One of France’s greatest ever talents, Thierry Henry scored 51 goals in 123 appearances for the national side.

Henry made his debut for France in the late nineties and formed part of their World Cup-winning squad on home soil in 1998. He was taken to the tournament as the second-youngest player after David Trezeguet, but impressed to score three goals at the finals and finish as France’s leading scorer.

Henry again top-scored for France as Les Bleus won the 2000 European Championship, where he scored three goals, including the equaliser in the semi-final win against Portugal.

He added a Golden Ball and Golden Boot at the 2003 Confederations Cup, where a Henry-inspired France claimed the trophy with a 1-0 win over Cameroon. Henry – who won a record-breaking four Premier League Golden Boots – is Arsenal’s all-time record goalscorer with 228 goals for the Gunners.

Olivier Giroud wrote his name into the record books with the opening goal in France’s 3-1 win over Poland, a result which moves the world champions into the quarter-finals of the 2022 World Cup.

Giroud has struggled for status on occasion during his club career, with the forward rarely regarded as an undisputed first-choice during spells at Arsenal, Chelsea and AC Milan. For France, however, he has been a consistent performer and has now scored 52 goals in 117 appearances for the national team – reaching his record-breaking total with a better goal-per-game record than Henry.

Olivier Giroud takes his place at the top👏🏼🍷 pic.twitter.com/aF1WYTOBCE

He was a selfless member of France’s 2018 World Cup winning team, as his physical presence and intelligent link-up play allowed the likes of Kylian Mbappe and Antoine Griezmann to thrive. The 36-year-old has aged like a fine wine since that triumph and is back leading the line for Didier Deschamps’ side in Qatar.

He will be one to watch as England take on France for a place in the last four this weekend.