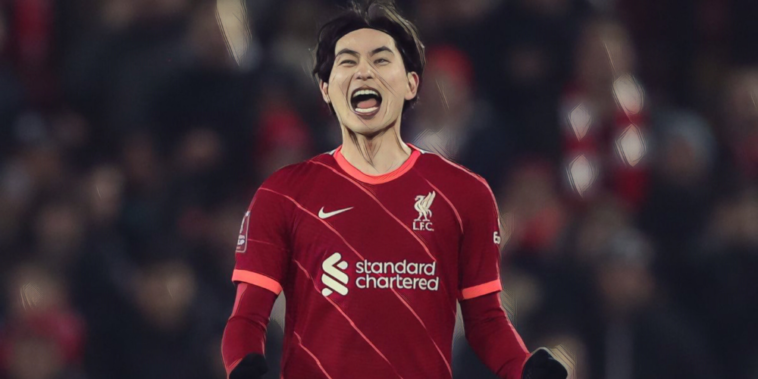 Jurgen Klopp has hailed the character of Takumi Minamino after the forward scored twice during Liverpool’s 2-1 win over Norwich in the FA Cup’s fifth round.

The Japan international was handed a rare chance and impressed during the win at Anfield, sealing Liverpool’s progress to the quarter-finals with a well-taken brace on Merseyside.

Minamino has failed to start a Premier League fixture so far this season, but has provided a valuable contribution when called upon and now has nine goals from eight starts across all competitions.

Klopp was full of praise for the 27-year-old following his double against the Canaries, hailing Minamino as a ‘constant threat’.

“His impression was obvious with scoring two goals and not only that – he had a lot more top, top football moments.

“He was a constant threat tonight, he was mobile, he was quick. He was technically on an incredibly high level; it was really windy tonight and when you then saw how he controlled the balls when he had to bring down the high balls, that was all really, really, really good.

“I’m not surprised, I know how good he is and tonight he showed it to the public again, which is absolutely great.”

Klopp believes the Reds fans are now beginning to see the best of the forward and praised Minamino’s ‘character’ during his spell on the fringes of the first-team, admitting it has been a challenging period for the star since his arrival from Red Bull Salzburg in January 2020,.

“Absolutely. He shows everything, he has everything. That’s how it is, that’s why he is our player.

“Taki came in, in a difficult time, coronavirus was there full throttle, no supporters in the stadium, in a good football team obviously which was used to a lot of things.

“He had good moments, played really good football but now he needed time and in the moment he looks absolutely on the peak of things he can do.

“I’m very, very happy for him that he can show that. Obviously there are more difficult situations than Taki’s out there in the world but it’s obviously not so easy to be in and out and sometimes these kind of things.

“But his character is obviously top-class, which means when he is needed or when I give him the opportunity, he is delivering on a top-class level. I’m really happy.”

Read – Five of the most unique goals in Premier League history