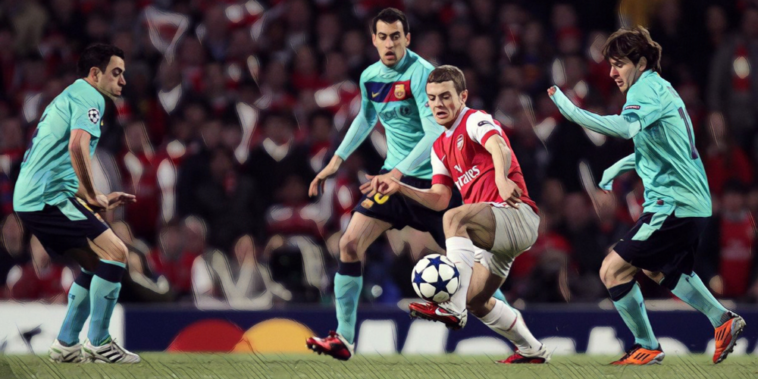 There will always be a sense of what might have been with Jack Wilshere, an implausibly bright talent whose star faded almost as fast as it had emerged.

Wilshere’s career has endured a sharp decline, from being billed as the saviour of English football to being a free agent clubs across Europe’s major leagues were unwilling to gamble upon.

Rewind just over a decade and Wilshere had the footballing world at his precociously talented feet. In 2008 he succeeded Cesc Fabregas as Arsenal’s youngest ever league debutant when making his first senior appearance against Blackburn Rovers at the age of 16 years and 256 days.

Expectations were understandably high for the midfielder, whose development accelerated with a loan spell at Bolton in 2009/10, before returning to north London ahead of what proved a brilliant breakthrough campaign.

Thrust into Arsene Wenger’s side on a regular basis Wilshere excelled, providing a distinct continental flavour to the Gunners’ midfield despite hailing from Hertfordshire.

Blessed with immaculate close control and evasive dribbling in compact spaces, he was the sort of technical talent that England had long looked to produce.

He ended the 2010/11 season as the PFA Young Player of the Year, having made 49 appearances in all competitions for Arsenal, though none were more memorable than a Champions League clash under the lights at the Emirates.

It is a performance that has come to define a career tinged with unavoidable regret.

Arsenal faced Barcelona in the Champions League’s last 16, the Catalans arriving recognised as the best club side in world football and seeking a second European crown in just three seasons.

The Gunners had been eliminated from Europe against the same opposition the previous season, unable to live with the pressing football of Pep Guardiola’s side.

The opening exchanges began in similar fashion as Barcelona dominated the ball, but the presence of Wilshere in the centre of the side allowed Arsenal to find a foothold in the contest.

Dynamic and full of drive, there was a confidence that oozed from the teenager. Constantly scanning, he received possession on the half-turn before shifting away from Catalan challenges and slaloming through opposition lines, beating the press that had consumed Arsenal the previous season with an effortless ease.

There was an early duel which saw Wilshere earn a roar of approval from the home crowd, as under pressure from Lionel Messi, Xavi, and Sergio Busquets he held off three successive challenges to retain possession.

Wilshere appeared to glide as he moved through the gears, interchanging passes with the likes of Fabregas and Robin van Persie as he broke forward into Barcelona territory.

There was bite, too, a thudding challenge on Pedro followed with another balletic manoeuvre to leave Andres Iniesta in his wake.

This was a 19-year-old performing far above expectations, going head-to-head with the greatest midfield club football has ever seen – and winning.

David Villa’s goal had handed Barcelona a first-half lead, but some uncharacteristic wastefulness from Lionel Messi ensured the game remained in the balance as Arsenal pushed for an equaliser.

Wilshere was at the centre of their charge, shifting away from Iniesta once more before beating Sergio Busquets to the ball and prodding forward for Theo Walcott to lead the counter.

He burst forward again – carrying possession from inside his own half – and assessed his options before finding Van Persie in space, the Dutchman’s erratic finish not befitting of the wonderful Wilshere run that proceeded it.

Two minutes after the break he drove on again, taking matters into his own hands. Exploiting a gap between Xavi and Iniesta, he powered through the space before taking Sergio Bisquets out of the game with a neat one-two.

It was, however, another moment in which the tantalising talent of the Hale End graduate earned deafening approval from the Emirates.

Arsene Wenger turned to the substitutes’ bench in search of change and the introductions of Andrey Arshavin and Niklas Bendtner restricted his licence to maraud forward in the closing stages.

Robin van Persie’s drilled equaliser had set up a grandstand finish, however, with Wilshere involved as the Gunners snatched a late winner.

Deep inside his own half, the midfielder angled a first-time pass into the path of Cesc Fabregas, a ball which removed three Barcelona shirts from the game and set Arsenal on the counter.

Fabregas found Samir Nasri, who in turn rolled a pass into the path of Andrey Arshavin to slam home a winner.

Arshavin’s goal had earned Arsenal a first leg win against Europe’s finest footballing side, but it was the performance of Wilshere that attracted the attention following the full-time whistle.

It was impossible to contain the excitement surrounding the starlet’s showing against an assortment of Spanish superstars, though Wilshere himself was unaware of the hype his performance would create.

“To be honest, I didn’t even think I was [playing that well],” Wilshere reflected when talking to Arsenal’s ‘In Lockdown’ podcast in 2020. “I thought I was doing alright. When we got to half-time, I had done a few good things in the first half but I felt like they had dominated.

“They had a way of making you feel like you were running around in circles for no reason. They used to make these little passes in midfield and you didn’t know whether to press or to hold back and wait for them.

“It wasn’t until after the game actually [that I realised how well I’d played]. It was Paul Akers, the kit man, who was like, ‘You just had Xavi and Iniesta in your pocket’. I said, ‘no chance’ and he was like, ‘I’m telling you’. Then I got man of the match.

“It’s difficult when you’re in a game to know how well you played and what people are thinking of games.

“It wasn’t until a couple of times in the game where I had beaten a midfielder where I thought, ‘Okay, right, if I can beat that first man you get a little bit of time to get your head up and make a forward pass’. I remember thinking, ‘Right, just beat the first press and you’ll be alright’.”

Pep Guardiola’s infamous post-match comments that Barcelona had players of Wilshere’s ability in their reserve side caused a stir, but there’s little doubt that the Arsenal teenager had left an impression on the illustrious opponents he had come up against.

Xavi spoke glowingly on Wilshere’s ability as a young footballer when speaking to the Mirror in 2015, believing the midfielder could have been one of the leading players in Europe without the injury issues that plagued him.

“If he had a career that had been injury-free we would already be talking about him as one of the top central midfield players in Europe.

“I have played against him, I have watched him carefully, and if he can overcome injuries, then he can still go on an be one of the best midfield players in the world.

“With all respect, he doesn’t play the English way.”

Wilshere’s career was expected to reach huge heights, but in truth his showing against Barcelona remains the game most remember from a career ravaged with fitness problems.

A stress fracture ankle injury during an Emirates Cup pre-season friendly against New York Red Bulls ruled him out for the entirety of the following season and he never reached the levels anticipated.

There were bright moments no doubt, including two FA Cup triumphs and a pair of BBC Goal of the Season accolades, though it is impossible not think back to that performance against Barcelona and envisage what Wilshere could have become with a little luck.

That night under the lights at the Emirates, he was the brilliant boy-wonder who took on Barcelona’s ball-magnets and came out on top.