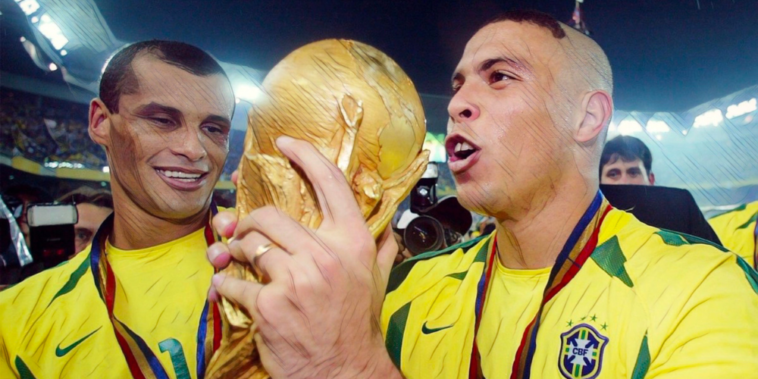 The World Cup headed to Asia for the first time in history for the 2002 edition, with Japan and South Korea named as co-hosts for a groundbreaking tournament.

It proved a unique spectacle in the Far East with no shortage of shocks and surprises, as favourites France and Argentina bowed out early and both Turkey and co-hosts South Korea upset the odds to reach the semi-finals.

Ahead of the World Cup, we look back at a fascinating edition of world football’s biggest event and remember five of the most iconic players from the 2002 tournament.

Ronaldo’s redemption was the overriding narrative of the 2002 World Cup, as the brilliant Brazilian returned after a lengthy absence to inspire the South Americans to a record-extending fifth triumph.

Ronaldo had starred as Brazil reached the final four years earlier, but was a shadow of himself during the defeat to France after suffering a seizure on the afternoon of the showpiece.

He travelled to Japan and South Korea as a different player to the one who had illuminated European football during his initial emergence, with serious knee injuries having seen the forward miss much of the past two-and-a-half years and Brazil’s entire qualification campaign.

Even a diluted version of Ronaldo – bizarre haircut included – proved a cut above his rivals however, as he enjoyed a stunning tournament to finish as the World Cup’s leading scorer.

He scored in every single fixture with the exception of the quarter-final win over England, ending the tournament with the Golden Boot and eight goals overall – the highest figure recorded in a single tournament for more than 50 years.

Ronaldo scored both goals as Germany were beaten 2-0 in the final, securing his place among the pantheon of greats in Brazil’s illustrious World Cup history.

Turkey upset the odds to reach the semi-finals of the 2002 World Cup, in what was the nation’s first appearance at the finals since 1954.

A talented Turkish team contained talents such as Yildiray Bastürk and Tugay Kerimoğlu, though it was arguably the performances of Hasan Sas which most grabbed the attention.

The Galatasaray forward scored in his side’s group stage opener against Brazil, before adding another goal and shining in a 3-0 thrashing of China.

Sas was at the centre of Turkey’s success as Şenol Güneş’ side reached the last four, where a narrow defeat to eventual champions Brazil halted their charge.

Oliver Kahn finished ahead of Ronaldo in the running for the tournament’s best player award, becoming the first goalkeeper to win the World Cup’s Golden Ball.

Kahn was a commanding presence in goal for runners-up Germany, who silenced pre-tournament doubts to reach the final.

Few had expected Die Mannschaft to challenge after a dismal Euro 2000 campaign, but a resolute defence contributed to their run to the final with Kahn conceding just once in six games before the showpiece.

An unfortunate error in the final clouded Kahn’s campaign somewhat, though his performances were recognised with both the Golden Ball and Lev Yashin Awards at the conclusion of the tournament.

Without his presence and heroics in goal, it is unlikely a mediocre Germany side would have reached the latter stages.

Ronaldo’s goals dominated the headlines for Brazil, though the forward possessed a stellar supporting cast with Rivaldo and Ronaldinho his attacking accomplices.

The trio – dubbed ‘The Three R’s – were in brilliant form in Japan and South Korea, with Rivaldo scoring five goals to finish as joint-runner up for the Golden Boot.

Rivaldo had been named as Player of the Tournament during Copa America success in 1999, though the Ballon d’Or winner had received criticism for Brazil’s failings in past tournaments, including defeat in the 1998 World Cup final.

💬 “For me, he was the most important player for Brazil at the 2002 #WorldCup,” said Felipão of @RIVALDOOFICIAL 🇧🇷

🧙‍♂️ We hope you enjoy watching his wand of a left foot. We hope Rivaldo enjoys his 48th birthday 🎉 pic.twitter.com/xh509vfS8S

Those memories were erased in the Far East however, as he produced stand-out showings in wins over Belgium (last 16) and England (quarter-finals) to secure Brazil’s progress to the latter rounds.

His theatrical dive in the group stage opener with Turkey had started his campaign off in regrettable fashion, but he ended it clutching a World Cup winners’ medal and as one of the tournament’s defining players.

Michael Ballack was fast emerging as one of Europe’s best midfielders in the summer of 2002, with his performances in Japan and South Korea continuing his ascent to world-class status.

Alongside Kahn he was the driving force of Germany’s campaign, starring as Saudi Arabia and Cameroon were beaten in the group stages to seal progress.

In the knockout rounds the Bayer Leverkusen midfielder came into his own, scoring the decisive goals in 1-0 wins over the United States and co-hosts South Korea to send Germany into the final.

⏲️ 71 minutes: A visibly gutted @Ballack receives the booking he knows will rule him out of the decider should @DFB_Team_EN get there 😢

⏲️ 75 minutes: The No13 scores the only goal to make Germany the first nation to reach 7 Finals 😀

His winning goal against the latter came just four minutes after Ballack had been booked, receiving a card which ruled him out of the final and he was forced to watch on from the stands as Die Mannschaft fell to defeat in Yokohoma.

It compounded a season of near misses for Ballack whose Leverkusen side had lost the Champions League final, DFB-Pokal final and finished as runners-up in the Bundesliga, but his own star was very much on the rise after a superb tournament in the Far East.