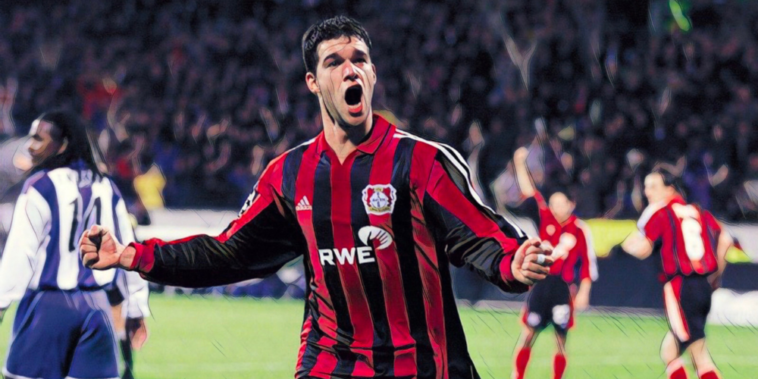 Michael Ballack’s legacy is one which is difficult to quantify, a career in which the age-old question of how full the glass is truly becomes apparent.

One of the most gifted German footballers of the modern era, he was the shining light in arguably the poorest Die Mannschaft side in recent memory. Whilst the honours racked up at club level, he became almost more defined by the ones which slipped from his grasp.

Ballack at his best was one of European football’s finest midfield talents, all-action and influential. Both a dictator and driving force, he earned the nickname ‘Little Kaiser’ as a reference to Franz Beckenbauer – a godfather figure among the pantheon of German greats.

Born in Görlitz, East Germany, the Berlin wall had fallen by the time Ballack made his first steps into the professional game at Chemnitzer FC. Those humble beginnings allowed Ballack to develop in German football’s lower leagues, with his first season as a professional ending in relegation to the third tier.

The following campaign proved one of real development as he scored 10 league goals, his knack of breaking forward to score goals and comfortability on both feet shining through from his formative footballing years.

Ballack’s breakthrough failed to end in promotion, though his performances had caught the eye of a FC Kaiserslautern side preparing for their top-flight return.

After biding his time with limited action over the opening months of the campaign, he featured in 13 of the final 16 games of the season as Otto Rehhagel’s side stunned the division to be crowned champions. It remains the first and only time a newly-promoted team has been crowned champions in Bundesliga history.

Having won a first major honour, he spent just one further season with Kaiserslautern – earning his first experience of Champions League football – before signing for Bayer Leverkusen.

In an up-and-coming team Ballack continued his own ascension, though it was also at the BayArena that his tale of near misses truly began. Leverkusen had twice finished as runners-up in the previous two seasons and had hoped the addition of one of the Bundesliga’s brightest talents could contribute to a maiden Bundesliga success.

Ballack’s first season ended in both team and personal misfortune. Leverkusen topped the table heading into the final round of fixtures and needed just a point at mid-table SpVgg Unterhaching to be crowned champions.

A Ballack own goal opened the scoring and set the tone for a 2-0 defeat, with Bayern Munich overhauling Leverkusen to win the Bundesliga on goal difference.

Even that agonising loss was less heartbreaking than the events of 2001/02 however, as Leverkusen endured what became known as the ‘Treble Horror’.

Ballack had been in majestic form across the course of the campaign as Klaus Toppmöller’s side chased immortality, approaching the end of the season with all three major trophies in realistic reach.

Ballack was the beating heart of the Bayer side, though this was a Leverkusen with many talents as the likes of Oliver Neuville, Bernd Schneider and Ze Roberto provided more than able support to the marauding midfield talisman.

In the Bundesliga an end-of-season collapse saw Leverkusen overhauled once again, blowing a five-point lead over the final three games to finish as runners-up for the fourth time in six seasons.

Just a little more than a week later, the hangover from their Bundesliga disappointment continued into the DFB-Pokal final. A second half collapse saw Schalke come from behind to win 4-2 at the Olympiastadion and end another avenue to silverware success.

Their Champions League campaign had seen Arsenal, Liverpool and Manchester United all eliminated in a remarkable run to the final, but the biggest game in club football proved another step too far.

Despite a spirited showing, a sublime swing of Zinedine Zidane’s left boot settled the Champions League final in Real Madrid’s favour, an unforgettable moment of European football imagery in which Leverkusen and Ballack were again left empty-handed.

Ballack travelled to that summer’s World Cup as part of an unfancied German side and in Japan and South Korea he cemented his status as one of the game’s best.

Few had expected a challenge from Die Mannschaft following a group stage exit at Euro 2000, but the brilliance of Ballack and goalkeeping great Oliver Kahn carried Germany through to the final. Ballack was decisive at key moments, providing four assists and scoring three goals.

He netted crucial winners in both the quarter-final and semi-final, breaking the hearts of co-hosts South Korea in the last four. It is a testament to his character and outstanding example that the latter winner came just four minutes after a tactical foul, one which earned the midfielder a caution and suspension for the final.

⏲️ 71 minutes: A visibly gutted @Ballack receives the booking he knows will rule him out of the decider should @DFB_Team_EN get there 😢

⏲️ 75 minutes: The No13 scores the only goal to make Germany the first nation to reach 7 Finals 😀

With Ballack watching on from the stands, a Ronaldo-inspired Brazil ended Germany’s hopes and secured a 2-0 win in Yokohama.

Whilst team honours proved elusive, Ballack ended 2002 named as German Footballer of the Year  and a move to the Bundesliga’s behemoth loomed.

Bayern Munich secured his signing and the move to Bavaria brought long-awaited success. Across four seasons in Munich he won three domestic doubles, becoming a three-time winner of the division’s Footballer of the Year award in the process.

Ballack was the commanding figurehead of the Bayern side, strong in both presence and mind. He was excellent in the air and imposing in the challenge, but shone brightest when granted the freedom to ghost onwards from midfield.

His prowess around goal saw him score 62 goals in 157 appearances for Bayern, whilst his 42 goals for the national side leave him ninth among Germany’s all-time top 10 goalscorers.

In search of a new challenge and frustrated with Bayern’s lack of progress in Europe, he signed for Chelsea on a free transfer in 2006.

Europe’s leading clubs had queued up for Ballack when it became apparent he would not sign a new deal in Munich, with the west Londoners winning the race after back-to-back Premier League titles under Jose Mourinho.

Adding Ballack and Andriy Shevchenko to an all-conquering side appeared to spell trouble for English rivals, but the marquee imports failed to fit during their initial months in a new division.

His time with Chelsea brought success in the form of five major trophies, winning the FA Cup on three occasions and a domestic double during the 2009/10 campaign.

There was, however, a smattering of further disappointments including defeat in the 2008 Champions League final as Ballack’s second chance at European glory ended in a penalty shootout defeat to Manchester United in Moscow.

Major losses had also come in an international career that spanned 98 caps and a decade of influence. After losing the 2002 World Cup final, he captained the side to a semi-final exit on home soil four years later, before a runners-up finish at Euro 2008.

Injury ruled Ballack out of the following World Cup and brought an end to his career with Die Mannschaft, as the curtain closed on the most influential German footballer of his era.

His club career ended back in Leverkusen, where he endured two seasons of struggle after leaving Chelsea before announcing his retirement from the game.

The near misses regrettably override some of the storied success of Ballack’s career, but on reflection, it is important to look back at what he did achieve, rather than what he didn’t.

Rampaging forward from midfield with the bit between his teeth, he was a leader of men and Germany’s great hope. Michael Ballack – an outstanding talent who was often inches away from true immortality.