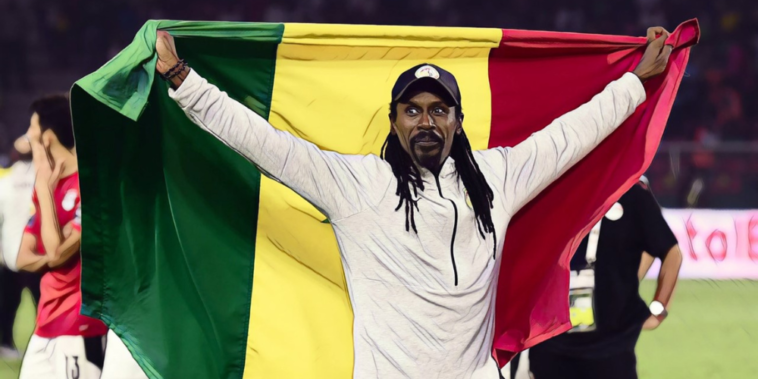 Aliou Cisse is something of a national treasure in Senegal. Cisse will lead Senegal into a World Cup last-16 clash with England this weekend, the latest chapter in his story of success with the Lions of Teranga.

Cisse has been the constant in Senegal’s greatest successes of the past two decades, both as a player and as head coach.

As he prepares to lead the nation into the World Cup’s knockout rounds for just the second time in their history, we look back and appreciate Cisse’s career with the Senegal national team.

Cisse captained the Senegal side that reached the AFCON final for the first time in 2002. The national side had not gone past the semi-finals in seven previous attempts, but reached the decider in Mali.

After topping the group, Senegal beat DR Congo and Nigeria in the knockout rounds, with Salif Diao scoring an extra-time winner against the latter to book Senegal’s place in the final.

Senegal’s hopes of a maiden success ended in the final against Cameroon, who became the first team since Ghana in 1965 to defend the trophy, following their triumph in 2000.

In February 2002, Aliou Cisse missed one of the penalties in the AFCON final causing Senegal to lose to Cameroon.

An entertaining goalless draw was followed by a penalty shootout, with Amdy Faye and El Hadji Diouf missing for Senegal. Tony Sylva saved Rigobert Song’s effort to give Senegal hope, but Cisse cruelly missed his spot-kick and crumbled to the ground in tears as champions Cameroon celebrated.

Later that year, Senegal travelled to the World Cup for the first time. El Hadji Diouf scored eight goals as Senegal topped a qualification group containing Egypt, Algeria and Morocco, earning their place at the tournament in Japan and South Korea.

It was a memorable World Cup debut for the Lions of Teranga, who upset holders France in the tournament opener. Papa Bouba Diop scored the decisive goal, as Senegal stunned the world champions in Seoul.

Draws with Denmark and Uruguay then booked Senegal’s place in the knockout rounds and Henri Camara’s double saw the African side edge Sweden after extra-time. Their run ended following a narrow defeat to Turkey in the last eight, though Cisse captained just the second African team to reach the World Cup quarter-finals.

After calling time on a playing career that included spells at Paris Saint-Germain, Birmingham City and Portsmouth, Cisse moved into coaching in 2012.

He spent three years with Senegal’s u-23 side, before taking on the senior role in 2015. Four years later, he led Senegal to the AFCON final, just the second time that the nation had reached the continental decider.

Having lost to Algeria during the group stage, Senegal were beaten by the same opposition in the final.

A freak Baghdad Bounedjah’s strike living forever in the minds of Algerians. 🦊 pic.twitter.com/2g6JDcBClP

It was a cruel moment which decided the game after just two minutes, as Baghdad Bounedjah’s shot took a massive deflection off Salif Sane and looped over goalkeeper Alfred Gomes.

Algeria held on to claim their second AFCON title and first since 1990.

Cisse became the first coach to lead Senegal to AFCON success in 2022, as the Lions of Teranga were crowned the continent’s finest for the first time.

Sadio Mane was named as the tournament’s Best Player for his performances in Cameroon, with Senegal’s star name scoring crucial goals against Cape Verde and Burkina Faso during the knockout stages.

A tense final with Egypt ended goalless and a shootout was needed to decide the outcome. Mane – who had a seventh-minute penalty saved by Egypt keeper Gabaski – netted the winning spot-kick as Senegal won 4-2 to claim their first-ever Africa Cup of Nations.

It was a sweet moment for Cisse, who had missed the decisive spot-kick as Senegal lost their first final two decades earlier. A huge parade welcomed the squad back to Senegal, with the president declaring a public holiday to celebrate the national team’s triumph.

Senegal needed another shootout success against Egypt to book their place at the 2022 World Cup, edging past the Pharaohs in a play-off to reach the tournament.

Sadio Mane again struck the decisive kick to seal Senegal’s place in Qatar. The African champions were given a favourable draw for the group stage, after being placed in Group A alongside the host nation, the Netherlands and Ecuador.

🦁 Aliou Cissé is an ICON

Mane’s pre-tournament injury was a major blow for Cisse and his side, who began with defeat to the Dutch before bouncing back to reach the knockout rounds. A comfortable win over Qatar was followed with a 2-1 win against Ecuador in their winner-takes-all showdown, with captain Kalidou Koulibaly volleying home the winner.

England now await in the last 16.