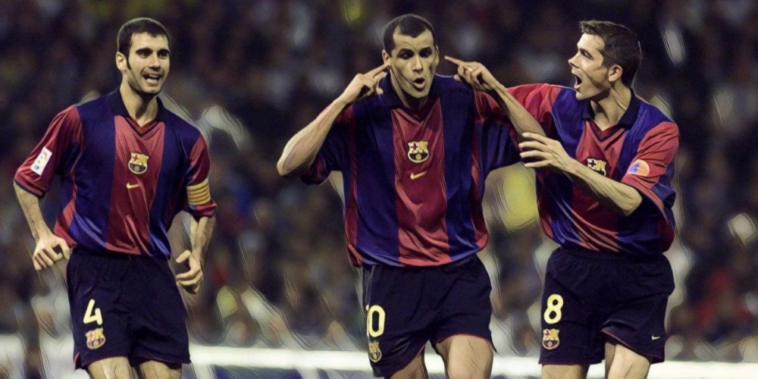 Our Iconic Performances series has revisited some of the most memorable individual displays in football history, but what exactly constitutes inclusion amongst our ranks?

Breathtaking brilliance is perhaps the key factor when assessing any would-be contender, though a fine performance is undoubtedly heightened by factors including audacity, occasion and importance.

Our latest offering delivers a performance which incorporates each of those aspects and then some, a display which saw Rivaldo rescue Barcelona with a hat-trick that is perhaps – even probably – the greatest treble ever scored.

Barcelona have a long and storied history of brilliant imports from South America, with Rivaldo one of three Brazilian Ballon d’Or winners to have represented the Catalan club throughout the nineties and early 2000s.

His rise was a remarkable one, becoming a global superstar despite hailing from an impoverished background in Brazil’s favelas, earning his break in European football with Deportivo La Coruna before one stunning season saw Barcelona come calling.

It proved a match made in heaven.

Rivaldo’s first season saw him inspire Barca to a first league title in four seasons, the Spanish side winning a domestic double as their marquee arrival scored 28 goals in all competitions.

It was a figure the Brazilian matched the following campaign as the league title was retained, his performances seeing Rivaldo reach new heights as he was crowned winner of both the Ballon d’Or and FIFA World Player of the Year awards in 1999.

Copa America success was also achieved with Brazil that summer, Rivaldo named as the tournament’s finest player after finishing as the competition’s leading scorer alongside teammate Ronaldo.

Barcelona were unable to defend the title the following season however, and their failure saw the departure of Louis van Gaal as manager, the Dutchman having endured a fractured relationship with his star player amid disagreements over Rivaldo’s best position.

Van Gaal’s replacement at the Camp Nou, Lorenzo Serra Ferrer, failed to galvanise the side and was dismissed in April of his debut season in charge with Barcelona facing the prospect of missing out on Champions League qualification.

Carles Rexach stepped in in a bid to turn around the club’s fortunes, but heading into the final round of La Liga fixtures the Catalans found themselves outside of the division’s top four.

Their final fixture was a meeting with Valencia at the Camp Nou, the side who sat directly above them in fourth with a three-point advantage – it was a winner-takes-all showdown.

This was a Valencia side who had showcased their talents amongst Europe’s best over the past two seasons, losing successive Champions League finals including an agonising shoot-out defeat to Bayern Munich just weeks before their crunch clash in Catalonia.

Héctor Cúper’s side had squandered the chance to secure Champions League qualification after losing to Deportivo La Coruna at the Mestella in the penultimate round of games, but headed to Barcelona as favourites and with a squad boasting an array of stellar names.

In truth, Valencia were better coached and possessed an incredible compliment of players, but a transitional Barcelona held the ace in the deck – the mesmerising talents of Rivaldo.

It took just four minutes for Rivaldo to make is mark as the Camp Nou awaited in nervous anticipation, opening the scoring with a stunning set-piece, a free-kick from distance that rose and dipped before nestling in off the post.

An individual piece of brilliance from the Brazilian that saw him mobbed by his elated teammates, but the protagonist of the tale remained almost unmoved, emerging from a crowd of congratulatory red and blue shirts before orchestrating to the home crowd to raise the levels.

Valencia – in need of only a draw to secure their place in the top four – hit back as Ruben Baraja levelled the scores, finding himself unmarked at a corner to power home an equaliser for Los Che.

Barcelona were heading towards the UEFA Cup as things stood, but were given a new lease of life on the stroke of half-time as Rivaldo conjured up something out of nothing to put the hosts back ahead.

Roberto Ayala’s clearing header fell just short of safety, with Barcelona regaining and recycling possession ahead of one last attack with just seconds left before the interval.

Rivaldo was found in possession some 25 yards from goal, shaping to shoot before feinting and shifting the ball further central on his stronger left foot.

Afforded an opportunity to shoot, he unleashed an unstoppable low drive that bulleted past Santiago Cañizares to send the Camp Nou into raucous raptures – Barcelona back in front before the break.

Barca had been far from perfect, but with their talisman in tantalising form the Catalans had a real chance of upsetting the odds to secure Champions League football.

Just two minutes after the restart however, Valencia were level, Baraja’s second of the game delighting the travelling contingent and placing an eery silence over the majority of those inside the hallowed ground.

Rivaldo had placed Barcelona upon his back for much of the season, but even the wonderful talents of the Brazilian seemed to have their limits as the home side were met with fierce defensive resistance.

As the minutes ticked down it appeared hopes of reaching the Champions League were all but over, Cañizares standing firm as he did his utmost to stop Rivaldo’s one-man crusade on the Valencia goal.

Disgruntlement surrounded the stands as the seconds ticks agonisingly closer towards the full-time whistle, though a Barcelona side in desperate need of a hero would find their saviour.

Frank de Boer’s clipped pass forward was aimed more in hope than expectation, arriving vaguely in the direction of Rivaldo who had three Valencia defenders in close company.

“In the moment that De Boer passed the ball, I was aware that I was a good distance away from the goal, so I knew that when I struck the ball it would have to be very hard.

The first saw the ball cannon off the Brazilian’s chest upwards, bouncing high into the air, the second provided a moment of pure inspiration and sealing one of the most iconic hat-tricks ever scored.

Facing away from goal the forward launches himself acrobatically, making the sweetest of connections with the dropping ball to fire an outrageous overhead kick beyond the despairing dive of Cañizares.

Audacity, technique, belief and utter brilliance, Rivaldo’s goal was the crowning moment of a definitive performance from a player who belongs rightfully amongst the pantheon of modern greats.

Euphoria erupted around the Camp Nou as teammates, fans and coaching staff alike celebrated in sheer disbelief, each of those inside the ground well aware they were witness to something truly special.

This was a Barcelona side far from the all-conquering superpower of later years, a side which had specialised in chaos and needed their brightest talent to deliver when it mattered most.

Rivaldo had dragged a mediocre Barcelona side kicking and screaming into the Champions League against all odds, his genius proving the difference and cementing his legacy as a generation defining talent.