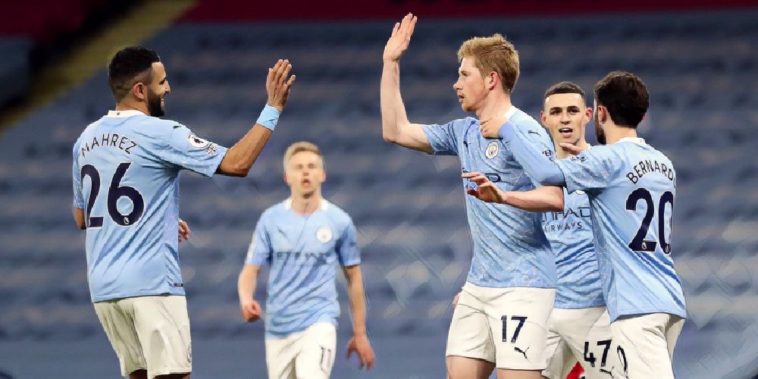 Manchester City re-established a 14 point lead at the top of the Premier League with an entertaining 5-2 win over Southampton.

City came into the game having seen their 21 game-winning run ended in the Manchester Derby at the weekend, and they got off to a slow start against a confident Southampton side who perhaps unexpectedly dominated the ball for the opening 15 minutes of the game.

However, it would be Man City who took the lead with virtually their first attack of the match – a ball over the top from Ruben Dias into Oleksandr Zinchenko the key to unlocking Southampton, before the Ukrainian put it into the box to Phil Foden. The England international saw his initial effort saved by Alex McCarthy, though the Saints ‘keeper was only able to parry it back into the six-yard box, Kevin de Bruyne getting to the ball and sending it into the back off the underside of the bar.

Southampton weren’t behind for too long though, Manchester City conceding a penalty for a second successive game after Aymeric Laporte pulled down Jannik Vestergaard at a James Ward-Prowse corner. The 26-year-old set-piece specialist stepped up and dispatched the resulting spot-kick down the middle to restore parity.

City would regain the lead five minutes before the interval, a loose Che Adams pass across the field being picked up by Riyad Mahrez, the Algerian shifting the ball onto his favoured left foot before whipping it expertly into the bottom left corner from 20 yards.

For all their positivity, Ralph Hassehuttl’s side were dealt a sucker punch on the stroke of half time, and having exchanged passes with Kevin de Bruyne, Mahrez danced into the area but saw his effort come back off the post, though Ilkay Gundogan continued his excellent goalscoring campaign, getting to the ball first to net the rebound.

The goals kept coming in the second half, the ball hitting the net three times in just four minutes before the hour mark, Mahrez and De Bruyne each netting their second of the game at either side of a Che Adam’s strike, with both sides’ defending leaving something to be desired in the build-up to all three.

In fairness, both sides could have scored even more, and speaking afterwards Pep Guardiola said that his side’s individual ‘quality’ was decisive, with Southampton having made it ‘very hard’ for his side.

“They made us suffer at times,” Guardiola told Sky Sports. “In general it was good. Another victory and we move on to Fulham. Southampton put a lot of players in the middle and made it very hard for us.

“They expose a lot which allowed us to counter. The quality of our players won the game – Riyad, Phil and Kevin.

“I don’t understand the hands from Arsenal against Fulham. Another example is the penalty today. Maybe one day they will explain the rules. But we won so we’re happy. Fulham is next.

Next up for City is an away trip to Fulham, before their Champions League last 16 second leg against Borussia Monchengladbach.