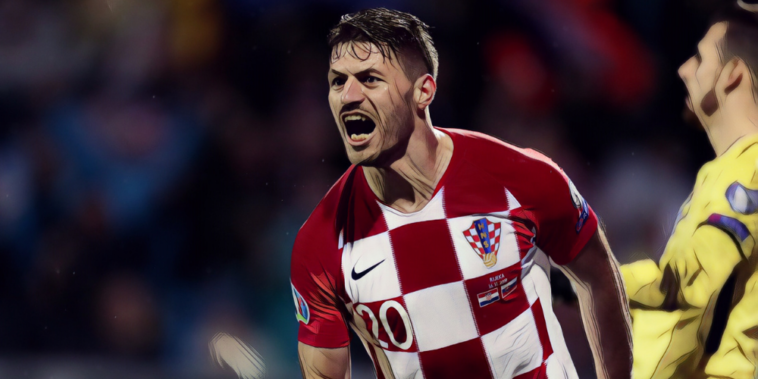 Football fans across the world will tune in for four weeks of European Championship action over the next month, as Euro 2020 prepares to fill a major tournament void that has lasted three years.

Some of world football’s best players will compete for the chance to be crowned the continent’s finest, though major tournaments also often provide a platform for less-heralded names to make their mark.

With the luxury of the internet, YouTube and endless football-themed video games, the days of complete unknowns bursting onto the scene are a distant memory.

However, for fans not well versed in domestic leagues outside of Europe’s elite five, Euro 2020 offers a chance to watch a host of players not often seen in action.

Here are five lesser-known players who could become household names this summer.

Croatia head into this summer’s European Championship with optimism after reaching the World Cup final three years ago, though the retirement of several stalwarts following their Russian venture means this is a new-look side under the guidance of Zlatko Dalic.

One major issue has been selecting who leads the line in the absence of the retired Mario Mandzukic, though Dalic’s pre-tournament comments on Dinamo Zagreb star Bruno Petkovic seem to indicate he will be the man tasked with filling those sizeable shoes.

Petkovic plays his club football in his native Croatia with Dinamo Zagreb, having struggled during spells in Italy with the likes of Bologna and Hellas Verona during his earlier career.

Since returning to Zagreb – the club where he spent time as a youth player – the 6ft 4in forward has become a key player, reaching 12+ goals across all competitions in each of the past three campaigns.

He made his senior debut for Croatia in 2019 and began brilliantly at international level, scoring five goals in his first eight caps, including four during Euro 2020 qualification.

However, he was criticised for wastefulness during a disappointing Nations League campaign, and the pressure is now on Petkovic to deliver ahead of Croatia’s group opener against England on June 13.

Whilst far from prolific in his career to date, the towering 26-year-old will hope to prove a handful for Croatia’s opponents in Group D.

Teenage centre-back Josko Gvardiol shapes as another who could make a name for himself if given a chance, the 19-year-old – who was subject of interest from Leeds last summer before signing for RB Leipzig – already the recipient of calls for inclusion despite only making his debut as a substitute on June 6.

Russia impressed during a home World Cup in 2018 to reach the quarter-finals, and with home fixtures against Belgium and Finland in Saint Petersburg will be hopeful of repeating those performances.

Stanislav Cherchesov’s side remain reliant on the goals of Artem Dzyuba in attack, with the 32-year-old Zenit St.Petersburg forward having netted a huge nine goals during qualification for Euro 2020.

The hulking forward will be the side’s chief goalscoring threat, though the emergence of Aleksandr Sobolev has provided Cherchesov with a fine alternative or partner to the Russia captain.

Sobolev has enjoyed a breakout season with Spartak Moscow, having risen from Russia’s lower tiers to become one of the stars of the division, scoring 15 goals in all competitions in 2020/21.

The 24-year-old settled a previous conflict with teammate Dzyuba on the phone and has now taken his chance after being called up to the national side, scoring three times in just six caps.

Sobolev’s towering frame – standing 6ft 5in – and aerial ability offers the option of a giant duel threat alongside Dzyuba in attack, with Russia having been no strangers to seeing stars burst onto the scene at a European Championship, with Andrey Arshavin, Yuri Zhirkov and Roman Pavlyuchenko amongst those to earn Premier League moves after the 2008 finals.

Denmark’s experienced side will face Belgium, Russia and Finland in Group B, having lost just one of their previous 12 international fixtures heading into Euro 2020.

That period has included a win over England at Wembley and a draw with Germany, a blend of national side stalwarts and young hopefuls raising optimism ahead of this summer’s tournament.

Denmark’s list of attacking options includes Barcelona forward Martin Braithwaite and RB Leipzig star Yussuf Poulsen, though amongst the prospects hoping to make an impression will be Jonas Wind.

Wind plays his club football for Copenhagen after coming through the academy ranks and has developed into one of the division’s best players, scoring 17 goals in all competitions last season with West Ham amongst the clubs linked with a move.

The 22-year-old made his senior international debut in 2020 and has since scored three times in seven appearances for Denmark, with Wind combining towering physicality with a mobility and footwork that belies his stature.

Injuries have halted his progress somewhat, but the forward looks a player ready to step up to a higher-quality league and will hope to showcase his talents with Denmark this summer.

Ukraine are being backed as ‘dark horses’ this summer following a strong qualification performance and favourable draw, with Andriy Shevchenko’s side having topped a group containing European champions Portugal to reach the finals.

Ukraine head into Euro 2020 with a collection of technical talents who have helped raise optimism about the nation’s hopes, with midfielders such as Ruslan Malinovskyi and Oleksandr Zinchenko working under the guidance of the country’s greatest ever footballer.

One player less familiar to fans will be Viktor Tsygankov, who has developed into one of his nation’s best players domestically as a key part of the Dynamo Kyiv side.

The winger has scored an impressive 60 goals in just 125 league appearances since breaking into the Dynamo side, winning the Ukrainian Premier League’s Footballer of the Year award in 2020.

The 23-year-old has taken time to settle at international level amid competition from the experienced duo of Andriy Yarmolenko and Yevhen Konoplyanka, but has scored five times across his past 13 caps and will hope for a prominent role at this summer’s finals.

After establishing himself as one of the best players in Ukraine, some stellar performances at Euro 2020 could convince sides on the continent that he’s ready for a major move. Chelsea-linked teenager Ilya Zabarny is another player to keep an eye on at centre-back.

Another side many have backed to cause an upset at Euro 2020, Turkey head into the tournament with the youngest squad on average, but one packed with emerging talent and quality.

Turkey cruised to qualification as runners-up to France and conceded just three goals during that period, with emerging goalkeeper Ugurcan Cakir having attracted strong interest from the continent in recent months.

Liverpool, Leicester and Tottenham have been credited with an interest in the Trabzonspor shot-stopper, who will hope to have won his battle with the more experienced Mert Gunok for the number one shirt ahead of Euro 2020.

The eight-cap goalkeeper will hope to restore the defensive strength that was lacking in an indifferent Nations League campaign, though Turkey have lost just one of their past 13 international fixtures.

Cakir is tall, strong and a fine shot-stopper with no significant weaknesses to his game and he will be watched closely by Premier League sides if handed his opportunity at Euro 2020.