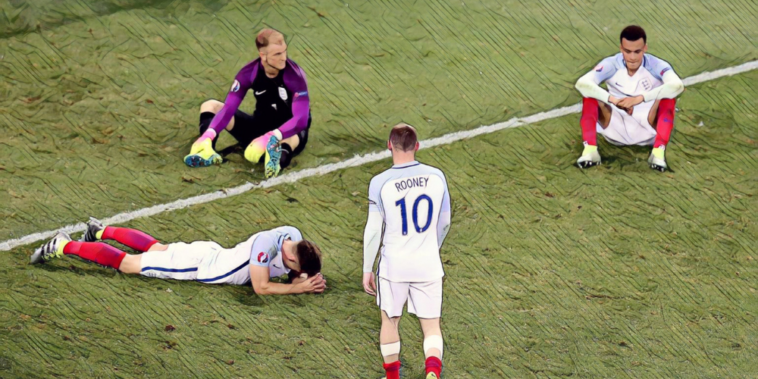 Ah, England. One of football’s proudest nations with perhaps an over-inflated sense of standing within the game, often labelled as one of the elite despite limited tangible international success.

English football fans are well versed in the trials and tribulations of supporting the Three Lions, as talented side after talented side have failed to live up to pre-tournament expectations at major finals.

It is the hope that kills you, after all.

England head into Euro 2020 this summer with an embarrassment of attacking riches and a side brimming with youthful potential, a scenario that has unsurprisingly led to cautious optimism from those amongst the nation who still dare to dream.

Could this be the summer than England end a 55-year wait for a major trophy? Or another campaign destined to fail despite the high hopes that come before it.

Ahead of Euro 2020, we look back at five of England’s most humiliating major tournament defeats.

England headed into the 1950 World Cup as one of the favourites to win the trophy on their first appearance in the competition, a status that was enhanced after Walter Winterbottom’s side comfortably beat Chile 2-0 in their opening game.

The Three Lions had a side boasting talents including Stanley Matthews, Tom Finney and Billy Wright, but suffered arguably the worst result in the national side’s history in their very next fixture.

England had lost just four of 30 post-war international fixtures and faced a US side comprised of part-time players, who had lost seven successive games heading into the group stage clash.

What had promised to be a formality for the English turned into one of international football’s greatest shocks in Belo Horizonte as Haiti-born Joe Gaetjens’ goal secured a narrow win for the US, who had begun the World Cup as 500/1 outsiders to lift the trophy.

An American team containing dishwashers, funeral directors and teachers had upset the odds to emerge victorious, with a stunned England crashing out of the World Cup after losing their final fixture to Spain.

England often enter major tournaments with aspirations – occasionally misguided – of winning silverware and the 1988 vintage were no different, Sir Bobby Robson proclaiming the side as the best of his six-year spell in charge pre-tournament.

Bryan Robson captained a side that contained talents including Gary Lineker, John Barnes and Chris Waddle, one which was stunned by underdogs and tournament debutants Ireland in their opening fixture.

Jack Charlton’s Ireland squad contained six players from Liverpool and Manchester United – the top two sides in England the previous season – and a host of top-flight names, though the Boys in Green started as outsiders in the searing heat in Stuttgart.

Even Charlton had said his hope was that Ireland would ‘surprise a few people’ during the tournament, a shock coming in the very first fixture as Ray Houghton’s header handed his side a dream start after just six minutes.

It proved the worst possible opener to the tournament for England and was one the Three Lions failed to recover from, losing to a Marco van Basten-inspired Netherlands in their second game, before returning home with three consecutive losses after defeat to the Soviet Union.

England crashed out of Euro 2000 in dismal fashion following this late defeat to Romania, as Phil Neville’s brain-fart saw the defender concede a late penalty to hand the Romanians a decisive winner.

Kevin Keegan’s side had earlier thrown away a two-goal lead to lose to Portugal in their group stage opener, before regrouping to edge out Germany courtesy of Alan Shearer’s goal.

England needed just a point to be sure of their place in the quarter-finals but began nervously in Chaleroi, with Romania taking a deserved lead through a fortuitous strike from Cristian Chivu.

England responded to turn the game around before half-time, a Shearer penalty and Michael Owen’s goal putting the Three Lions firmly in control – and with one foot in the last eight.

It all unraveled spectacularly in the second half however, Dorinel Munteanu lashing home an equaliser before Neville’s clumsy foul on Viorel Moldovan allowed substitute Ioan Ganea to send Nigel Martyn the wrong way from the spot for a late winner.

Romania progressed as runners-up to Portugal, whilst an embarrassed England crashed out.

Germany and England resumed rivalries in the last 16 of the 2010 World Cup in South Africa, though for all the pre-game patriotism from the Three Lions supporters it proved an afternoon to forget in Bloemfontein.

England had stumbled through a straightforward-looking group to finish as runners-up to the United States and their fortunes failed to improve when handed the task of facing a youthful German side.

In truth, it was a mismatch of epic proportions and for all the uproar over Frank Lampard’s ‘ghost goal’ that crossed the goal-line at 2-1, it would perhaps have had little impact on the end result such was Germany’s dominance.

Fabio Capello’s troops floundered in a dated 4-4-2 system as the Germans ran riot in midfield, captain Steven Gerrard shunted out onto the left-side of the midfield as Gareth Barry struggled to deal with the effervescence of Mesut Ozil and Thomas Muller.

It was cut-throat counter-attacking football at times from Germany and an emphatic demonstration of how far England were behind the world’s leading nations.

If the following decades have diminished the shock of England’s aforementioned defeat to the US in 1950, the Three Lions’ Euro exit to Iceland provided a modern upset of almost equal magnitude.

Iceland were participating in their first ever major tournament and the Nordic nation – with a population of just 330,000 – produced their greatest ever result after stunning England in Nice.

England had endured an indifferent group stage campaign before being drawn with Iceland in the first knockout round, a seemingly favourable draw which followed pre-game perceptions as Roy Hodgson’s side took a fourth-minute lead through Wayne Rooney’s penalty.

Iceland equalised almost immediately as England failed to deal with a long-throw, before taking a shock lead after just 18 minutes as Joe Hart allowed Kolbeinn Sigthorsson’s tame effort to slip through his grasp.

England were shell-shocked and toiled for over an hour in search of an equaliser that never came, with Hodgson resigning from his position in the aftermath of the nation’s most embarrassing tournament defeat since their US upset 66 years earlier.

Outfought, outworked and outthought by a nation ranked 34th in the world by FIFA, this was a low moment in the national side’s history and yet another example of an England side performing well below their capabilities when the pressure is on.