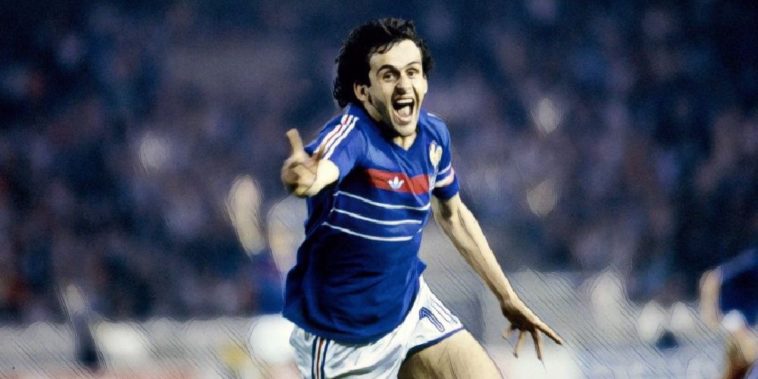 The long-awaited European Championships are finally upon us, with Turkey and Italy going head-to-head to kick the tournament off in Rome on Friday night.

Previous editions of the tournament have marked the birth of future stars, or cemented the legendary status of the game’s greatest, with this summer set to be no different.

As the excitement – or perhaps dread – reaches fever pitch, let’s take a look at the ten players who’ve netted the most times in the competition’s history – some of whom could still add to their tally in next month’s festival of football.

A member of Ajax’s ‘Golden Generation’ in the early/mid 90’s, the Dutchman announced himself on the world stage as a teenager in the 1994/95 campaign, netting an 85th-minute winner in the Champions League final against AC Milan.

The striker had already made his Holland debut earlier that season and would go on to score twice in a crucial 2-0 play-off win over Ireland, helping the Oranje to secure qualification for Euro 96.

While a knee injury would mean he would miss most of the tournament, his goal against England in a 4-1 defeat helped his side progress to the knockout stages, before going on to set the tournament alight four years later alongside teammate, Dennis Bergkamp.

At Euro 2000 – in front of home support – the then Barcelona man was at his peak, netting five times in the competition, including a hat-trick in a 6-1 thrashing of Yugoslavia, to finish as the joint-top scorer alongside Savo Milosevic, only for the Netherlands to crash out on penalties in the semi-finals against 10 man Italy – Kluivert missing a spot-kick in normal time.

The forward would also play for his country at Euro 2004, but failed to add to his Euro’s tally, as Holland once again exited at the last four stage.

The one-time Blackburn Rovers man is an iconic figure in Portuguese football, having been a key part of the nation’s extremely talented side in the early 2000’s.

After making his international debut as a 19-year-old in 1996, the striker went on to break English hearts at Euro 2000, scoring a late winner to secure a remarkable 3-2 comeback win in the group stage, despite Kevin Keegan’s side having raced into a 2-0 lead.

Gomes would go on to net three more times in the tournament as Portugal finished third, although his impressive performances were marred by a lengthy international ban following a violent push on referee Gunter Benko in the 2-1 semi-final loss to France.

The forward would score once more four years later en route to Portugal’s shock defeat in front of their own support at the hands of Greece, before becoming one of just a handful of players to score in three successive European Championships at Euro 2008.

After helping France to a World Cup triumph in 1998 – where he finished as his nation’s top scorer – the Arsenal legend was just as impactful two years later, as an iconic Les Blues side ran out winners at Euro 2000.

That tournament saw the lethal forward bag three goals, including a vital equaliser to cancel out Gomes’ opener in the semi-final triumph over Portugal, with France going on to beat Italy in the final.

After a shock group stage exit at the 2002 World Cup – in which the French failed to score a single goal – the iconic striker found his form again two years later, netting twice at Euro 2004, albeit with France losing to eventual winners Greece in the quarter-finals.

Following the heartache of suffering defeat in the 2006 World Cup final – forever remembered for that infamous Zidane headbutt – Henry netted his final goal at a major international tournament at Euro 2008, albeit in a dismal 4-1 loss to Holland.

It’s difficult to think of any young player who’s made a greater impact at a European Championship’s than Wayne Rooney, the teenage sensation turning heads with a breathtaking, breakthrough display at Euro 2004.

The Everton academy graduate had been a Premier League regular for almost two years, yet his displays in Portugal that summer were what truly catapulted him to superstardom, the fearless forward netting braces against both Switzerland and Croatia in the group stage, before suffering an unfortunate injury against the hosts as England crashed out in the last eight.

In truth, that was perhaps as good as it got for the striker at major tournaments, particularly at the Euros, with the Three Lions failing to qualify in 2008 and Rooney enduring suspension for the first two games in 2012, albeit with the then Manchester United man netting in the final group game.

His final major tournament appearance was perhaps his most disappointing, the United legend captaining his nation in their disastrous defeat to Iceland at Euro 2016, a game in which Rooney had put England ahead from the penalty spot.

He would call time on his international career in 2018 as the nation’s top scorer, with 53 goals in 120 caps.

Having been kept out of Euro 2000 due to a cruciate ligament injury – the same issue that delayed his move to Old Trafford – the Dutchman made up for lost time four years later, netting four times in the tournament, all of which came in the group stages.

With Holland having failed to qualify for the World Cup in 2002, Euro 2004 was Van Nistelrooy’s first taste of a major tournament, with his side going on to lose to hosts Portugal in the semi-final’s.

After a disappointing World Cup campaign in 2006 and a falling out with coach Marco Van Basten, the prolific striker called time on his international career, before swiftly reversing his decision prior to Euro 2008, where he would score twice, including an equaliser in a 3-1 defeat to Russia in the last eight.

That proved to be his last involvement for his country at a major tournament as he was left out of the squad for the 2010 World Cup, although he would earn a recall in 2011, finishing his Oranje career with a respectable 35 goals in just 70 games.

The enigmatic Swede has been an enduring presence at the top of European football for almost two decades, having made his senior debut for Malmo way back in 1999, before earning his first international call-up two years later while at Dutch giants, Ajax.

After enduring a sporadic role at the 2002 World Cup, Ibrahimovic leapt into the spotlight two years later, netting arguably the goal of the tournament with an outrageous back-heel lob to draw level against Italy in the second group game, having already scored from the penalty spot in the opening match.

He would net twice more four years later against both Greece and Spain, albeit with Sweden crashing out in the group stage, before adding two more to his tally at Euro 2012, including a stunning acrobatic volley in a 2-0 win over France, although once again Ibrahimovic and co suffered group stage elimination.

After failing to qualify for the 2014 World Cup, ‘Ibra’ then led out his country at Euro 2016, yet failed to score as Sweden finished bottom of their group. That looked set to be his last taste of international football, before he reversed his retirement earlier this year, making his comeback in March in the World Cup qualifiers.

While had looked set to feature in a fifth European Championship’s this summer, a knee injury has sadly curtailed those hopes for the veteran AC Milan striker.

While Ibrahimovic won’t be adding to his tally this summer, one man who can is Antoine Griezmann, the Frenchman looking to add to the six he registered back in 2016.

After netting once off the bench in the group stage against Albania, the then Atletico Madrid striker came alive in the knockout stages, bagging a brace as France edged past the Republic of Ireland in the last-16, before adding another in the 5-2 thrashing of Iceland in the quarter-finals.

With his trademark celebration in tow, the forward then capped a fine tournament with another double against Germany in the last four to send the hosts into the final, where they were ultimately defeated by Portugal.

Despite that disappointment, Griezmann finished as the competition’s top scorer and best player, before going on to net four times en route to France’s World Cup triumph in 2018.

The Premier League’s all-time top scorer made a goalscoring England debut against France in Feburary 1992, before featuring against Les Bleus in his only match of the Three Lions dismal Euro’s performance that summer.

In truth, it wasn’t the greatest start to his international career, despite his lethal domestic form, as he went into Euro ’96 having scored just five times in 23 caps and was without a goal for almost two years leading up to the tournament

Fortunately for Shearer – and England – Terry Venables kept faith with the Blackburn Rovers striker and he duly delivered, scoring against both Switzerland and Scotland, before adding a brace in one of England’s greatest ever tournament displays against Holland.

After four group stage goals, he would add a fifth inside three minutes of the semi-final clash with Germany, although the host nation would crash out after suffering defeat on penalties at Wembley.

Four years later, the then Newcastle forward bagged two goals in the group stages against Germany and Romania, yet they proved in vain as Kevin Keegan’s side failed to progress.

He may have become something of a controversial figure following his turbulent reign as UEFA president, yet the three-time Ballon d’Or winner was no doubt a tremendous footballer in his day, becoming an iconic figure for France in the 1980s.

While he would feature in three World Cup campaigns for his country, his only European Championship appearance came in France in 1984, but boy did he make his mark.

As the captain of the hosts, Platini was in simply devastating form, netting once in the opening game against Denmark, before bagging trebles in each of the next two games, including a ‘perfect’ hat-trick against Belgium in a 5-0 win.

With seven goals in just three games, the Juventus man added another with a last-gasp winner over Portugal in the semi’s, with his ninth and final goal coming in the 2-0 win in the final, leaving him as the record-holder for the most goals at a single European Championship’s, even though the tournament had no last-16 or quarter-final stage.

Alongside Platini sits Cristiano Ronaldo, the Portuguese icon ‘officially’ the highest scorer of all time and with a number of European Championships to his name, including having featured in the most tournament games (21), as well as being the only player to score in four different editions of the competition, starting back in Euro 2004.

The teenage superstar scored his first goal in the competition in a 2-1 defeat to Greece in the group stages, before netting a vital strike in the 2-1 semi-final win against Netherlands, the hosts losing once again to Greece in the final.

Following a disappointing performance in 2008 in which he scored just once, the then Real Madrid man plundered three goals four years later, including registering the only goal in a quarter-final win against the Czech Republic.

On his fourth attempt, the forward finally managed to triumph in the competition at Euro 2016, once again netting three times to become the man only to do so at more than one European Championship – en route to the final. While he would be forced off with injury in the showpiece, Fernando Santos’ men would go on to shock hosts France to lift the title, with Ronaldo willing his team on on the touchline.

The 36-year-old heads into this summer’s tournament looking to become the outright top scorer in European Championship history and add to his incredible 104 goals for his country, the Juventus man now just five goals behind Ali Daei’s all-time record of 109 international goals.