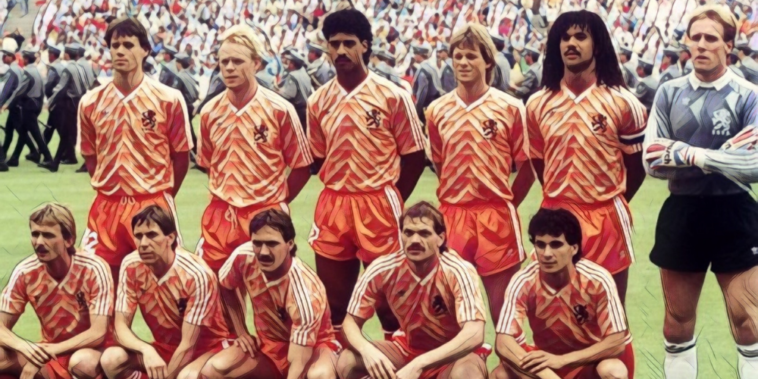 Holland has a long and storied history of fluid football on the international stage, the nation having had its fair share of superstar names throughout the years.

Following near misses with runners-up finishes in the 1974 and 1978 World Cup finals, the principles of Dutch football came together in stunning style as Oranje conquered Europe at the 1988 European Championship.

Marco van Basten’s performances and iconic final goal are the defining images of the tournament, the forward’s implausibly brilliant volley against the Soviet Union securing the Dutch their first major international trophy.

Despite generations of talent it remains their sole success at a major tournament and means the side that lifted the trophy are etched into football folklore.

Here is the iconic Holland XI that won Euro ’88.

Van Breuken won 73 caps for the national side and was named as Dutch Goalkeeper of the Year on four occasions, spending two seasons with Nottingham Forest in the eighties after being signed as Peter Shilton’s replacement.

He returned to the Netherlands to keep his international ambitions alive and enjoyed the best period of his career during a decade with PSV Eindhoven, winning six league titles and the European Cup, the latter coming as part of a treble in 1987/88 before European Championship success.

Van Aerle was another member of the PSV side that conquered Europe before achieving further success at international level, making 364 appearances for the club in all competitions during a period of huge success.

He played largely in midfield with Belgian international Erik Gerets first choice at club level, but featured in his favoured position at right-back at Euro 88 and won admirers for his tough-tackling and surging runs forward.

Van Aerhle only made his senior debut for the Dutch in 1987 before immortalising his place in the nation’s history with major tournament success a year later.

Rijkaard headed into the tournament after a loan spell at Real Zaragoza, having fallen out with Johan Cruyff following a period of silverware success at Ajax.

The centre-back was brilliant as the Netherlands were crowned champions of Europe, earning a move to AC Milan alongside international teammates Van Basten and Ruud Gullit to form one of club football’s greatest ever sides.

Rijkaard was converted into a world-class holding midfielder in Milan and won two league titles and back-to-back European Cups, before returning to Ajax and winning the Champions League in 1995.

He moved into the management and took charge of the Dutch at Euro 2000, before enjoying a successful period at Barcelona that included two league titles and Champions League success.

One of Dutch football’s great defenders, Koeman was another member of PSV’s all-conquering side before starring on the international stage at Euro ’88.

Koeman was a composed centre-back with brilliant on-ball ability and a thunderous strike, that latter trait seeing him compile a mind-boggling goalscoring record of 239 goals across his career.

He scored from the penalty spot as part of the semi-final win over West Germany, one of 14 goals he scored at international level.

Koeman moved to Barcelona a year after Holland’s success, forming part of Johan Cruyff’s fabled ‘Dream Team‘ and scoring the winner as the Catalans won the European Cup in 1992.

Van Tiggelen was a regular in the Dutch side for almost a decade and played his club football at Anderlecht at the time of the European Championship, the left-back featuring in every single match of the 1988 tournament.

He spent the entirety of his club career in the Netherlands and Belgium with the likes of Anderlecht and PSV Eindhoven, winning 56 caps at international level before his retirement.

Mühren had earlier spent seven seasons of his club career in England, representing Ipswich Town and Manchester United and scoring a penalty as the latter won the replayed 1983 FA Cup final.

He also enjoyed two spells with Ajax either side of his time in English football, winning two league titles and the European Cup during the first of those stints in Amsterdam.

Wouters was the uncompromising anchor of the Dutch midfield and an influential figure in their triumph at Euro ’88, being named in the Team of the Tournament.

He won 70 caps and scored three goals during an international career that lasted 12 years, whilst his club career saw him win major silverware with both Ajax and Bayern Munich.

Wouters was named as Dutch Footballer of the Year in 1990 and received infamy in England following a World Cup qualifier in 1993, his wayward elbow fracturing the cheekbone of Paul Gascoigne.

The influential Gascoigne was substituted at half-time as England blew a 2-0 lead to draw, a costly result as the Three Lions missed out on qualification.

Vanenburg spent the majority of his club career with Dutch powerhouses Ajax and PSV, winning 15 honours across his spells with the two sides.

Twice named as Dutch Footballer of the Year, the winger was the fourth member of PSV’s treble-winning side that started the Euro ’88 final, the highlight of an international career that remarkably saw him score just once in 42 caps despite an impressive goalscoring record at club level.

Koeman, brother of centre-back Ronald, started the final on the left side of midfield, one of 31 caps he won during an international career that spanned from 1983 to 1994.

Koeman’s career was largely overshadowed by his younger sibling’s achievements, though he enjoyed success during a lengthy spell in Belgium, winning a host of silverware at Mechelen including a league title and the European Cup Winners’ Cup.

He returned to the Netherlands with PSV in 1990 and won back-to-back league titles during his first two seasons with the club.

Regarded amongst the greatest Dutch players in history, Gullit was the captain of the Euro ’88-winning side, their success coming a year after he became the world’s most expensive footballer with a move to AC Milan.

Gullit had starred at Feyenoord and PSV Eindhoven before moving to Italy, where he established himself as one of the world’s best players, winning the Ballon d’Or in 1987, alongside three league titles and two European Cups.

He scored the opening goal in the final against the Soviet Union after heading home Van Basten’s cross, Gullit a brilliantly complete player who combined dynamism with technical creativity and thrived in several positions across his career.

Gullit moved to Chelsea after leaving Milan and later became player-manager of the west London side, becoming the first foreign manager in history to win the FA Cup in 1997.

Van Basten’s final moment is widely regarded as one of the greatest goals of all-time, a strike of incredible technique and audacity on one of the game’s biggest stages.

It was the defining moment of an outstanding tournament for the forward, who finished as the leading scorer with five goals, including a stunning hat-trick to defeat England in the group stage.

Van Basten sits amongst the pantheon of Dutch football greats and scored 282 goals in just 379 games in a club career tragically cut short, his status amongst the best ever reflected with three Ballon d’Or triumphs – a figure bettered by only Lionel Messi and Cristiano Ronaldo.

Van Basten was an improbably complete centre-forward and brought both elegance and ruthlessness around goal, a generation-defining player who lit up Euro ’88 as the leading light of the victorious Dutch side.