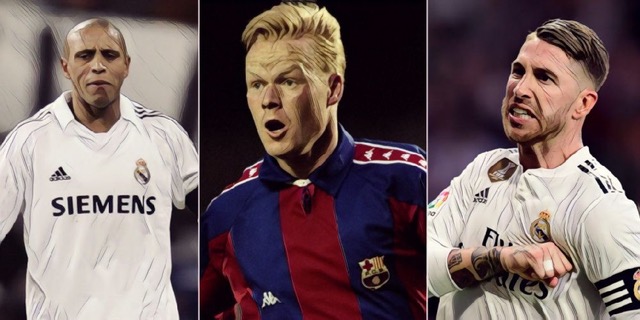 Real Madrid’s Sergio Ramos made history this week after scoring against Real Sociedad, the centre-back’s goal moving him clear as the highest scoring defender in the history of Spain’s top flight.

Ramos opened the scoring from the penalty spot and has been a regular source of goals throughout a glittering career at the Bernabeu, a career which has delivered a hugely impressive four league titles and four Champions League trophies to date.

The Spain international is not the only defender to have made a goalscoring impression in La Liga, however, and we’ve decided to look back at the most prolific defensive stars.

One of the greatest full-backs of all-time and a player who helped revolutionise a once unfashionable position, Carlos’ forays forward from left-back were iconic during the first Galactico era at Real Madrid.

The Brazilian’s pace, power and thunderous left boot saw him score 46 league goals during his time with Los Blancos, many of them proving to be spectacular including a highlight reel of free-kicks and long-range efforts.

Quite simply, Carlos could hit a ball very, very hard.

Another of Real Madrid’s most successful players, only former teammate Francisco Gento can better Pirri’s tally of ten Spanish league titles in the history of the division.

Pirri began his career in central midfield before later moving to a sweeper role in the backline, his commitment to the cause best indicated by his performance in the Cup Winner’s Cup defeat to Chelsea in 1971 – playing the replayed fixture with his arm in a sling after suffering a broken collarbone two days earlier.

Regarded amongst the greatest players and captains in the club’s long and illustrious history, Pirri made 561 appearances in all competitions and scored 172 goals, with 52 of those strikes coming as a defender in La Liga.

The third of four Real Madrid icons to feature on this list, the Spanish giants have had their fair share of goalscoring defenders with Fernando Hierro having scored 60 league goals as a defender for the club.

Hierro – like the aforementioned Pirri – spent part of his earlier career further forward, scoring a career-best 21 league goals from a more advanced position during the 1991/92 campaign.

His latter career was spent largely at centre-back, however, captaining the side to a host of major trophy success including three Champions League titles in just five seasons over the turn of the millennium.

A fine set-piece taker, Hierro’s permanent move into the backline did little to diminish his goal threat, finishing his career with an average of seven league goals-per-season, only failing to score in the final campaign of his Real Madrid stay.

That’s more than the likes of Michael Owen, Nicolas Anelka or even Harry Kane has managed in his career to date.

Just let that sink in.

The former Netherlands international was the great goalscoring defender of his time, possessing a fine strike from distance and a huge threat from both free-kicks and penalties.

Koeman formed part of Johan Cruyff’s Dream Team at Barcelona and it was his free-kick that delivered the club’s first European Cup in 1992, finishing his career at the Catalan side with 88 goals in all competitions including 67 in Spanish football’s top tier.

He registered double figures in all competitions during each of his six seasons at the Camp Nou, one of the great central defenders of his generation and a huge presence at either end of the pitch.

Ronald Koeman was so much more than just a defender for Barcelona 😍pic.twitter.com/XiqIEBBX1d

The man of the moment and now the highest-scoring defender in La Liga history, Ramos’ penalty against Real Sociedad lifted the Real Madrid captain above Koeman and into first place.

Ramos broke through at Sevilla and scored twice for the side before heading to the Bernabeu, where he has since established himself as one of the most influential defenders of the modern era.

The Spain international is quickly closing in on a century of goals for Real Madrid, with his hopes of further extending his recent record boosted by his status as the club’s first-choice penalty taker, inheriting the role following the departure of Cristiano Ronaldo and missing just once from 13 attempts thus far.

Ramos has also often shown his ability to score when it matters most, the centre-back incredibly one of just five players – alongside Raul, Samuel Eto’o, Lionel Messi and Cristiano Ronaldo – to have scored in multiple Champions League finals.