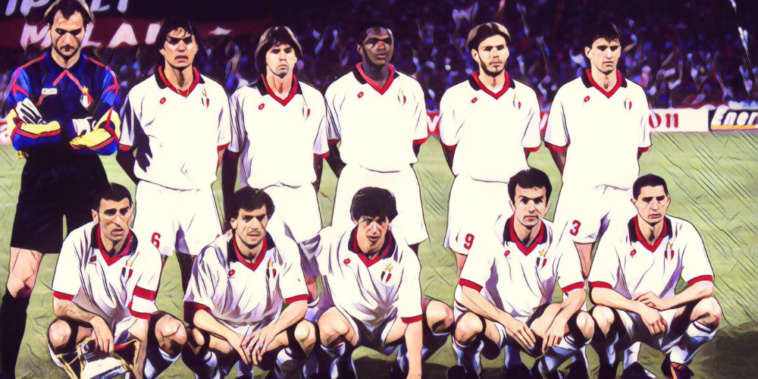 AC Milan’s thrashing of Barcelona in the 1994 Champions League final remains one of the most memorable matches in the competition’s history, the Italian side heading into the clash as underdogs before a stunning success.

The 4-0 scoreline remains the biggest winning margin in a Champions League final, as an understrength Milan – missing the likes of Marco van Basten, Franco Baresi and Alessandro Costacurta amongst others – ruthlessly dispatched of Johan Cruyff’s ‘Dream Team’ and emphatically ended an era of huge success in Catalonia.

Cruyff’s side had won four consecutive Spanish league titles and lifted a maiden European Cup two years earlier, but were no match for the Rossoneri in a brilliant final performance from Fabio Capello’s charges.

We’ve decided to look back at the AC Milan XI that destroyed the Dream Team in Athens.

Sebastiano Rossi spent much of his six seasons with Milan behind one of the most renowned defences in world football, the talents of Maldini and Baresi ahead of him meaning his achievements are often overlooked.

He was an excellent goalkeeper and reliable number one during a glittering period at the San Siro however, a towering presence who won five league titles alongside his 1994 Champions League success.

Had he not featured in a period between two Italian goalkeeping greats in Dino Zoff and Gianluigi Buffon, he would perhaps enjoy a more lasting legacy.

Captaining the side in the absence of the suspended Baresi, the club’s Champions League success was just another highlight in a career that saw Mauro Tassotti become an understated legend.

The right-back made 583 appearances for the club after signing from Lazio as a youngster, playing a key role in Milan’s rebuild following the Totonero scandal, remaining a prominent figure as the eras of Arrigo Sacchi and Fabio Capello brought incredible success.

He won five league titles and three Champions League trophies, lifting the latter as captain following a superb performance against Barcelona in the Greek capital.

Galli came through the youth system in Milan and became a prominent figure in the club’s success, featuring as part of their hallowed backline alongside the likes of Baresi, Tassoti and Maldini – completing a league season without defeat in 1991/92.

The emergence of Costacurta saw his opportunities limited in the latter years of a Milan career that delivered 325 appearances, though he was recalled for the final in the absence of the Costacurta and Baresi, helping the Italian side to Champions League success.

He later had a brief spell at Watford under Gianluca Vialli, signing for the Championship side aged 38.

Quite possibly the greatest defender to have graced the game, there are few superlatives that have not been bestowed upon Paulo Maldini, a player whose career spanned 25 years and brought a record-breaking 902 appearances for Milan.

Comfortable at left-back or centrally, he was utilised in the centre against Barcelona and gave a typically classy display, lifting the third of five Champions League trophies he would win during an incredible career.

Maldini outwitted opponents with intelligent defending and possessed the elegance of a midfielder in possession, the best of his – and possibly any – era.

Drafted in to fill Maldini’s now vacant left-back position in a defensive reshuffle, Panucci ended his first season with Milan with winners’ medals in both Serie A and the Champions League.

He featured rather sporadically over his four seasons with the club given the competition for places, later having spells with Real Madrid – winning a second Champions League trophy – and Roma, alongside an entirely forgettable loan spell at Chelsea.

Albertini’s talents can often fly under the radar given the star-studded names that dominated Serie A in the nineties, but he was an excellent midfielder and one of Milan’s most prominent performers on that night in Athens.

Albertini spent the best years of his career in Milan colours and made 406 appearances before his influence started to fade, the star having a brief spell at beaten final opponents Barcelona in his latter career.

Desailly became the first player in history to win successive Champions League trophies with different clubs, having formed part of the Marseille side that beat Milan in the previous season’s showpiece before moving to Italy.

The Frenchman was an all-action presence at the base of the midfield and scored the fourth goal of the evening, racing through before firing home to send the Rossoneri into dreamland.

Zvonimir Boban spent a decade with Milan and won four league titles and the Champions League, the star part of a fine generation of Croatian footballers who made their mark in the nation’s first major tournament appearances during the nineties.

Creative and technically gifted but possessing a relentless work-rate, Boban was comfortable across the pitch but lined up on the right in Athens, working tirelessly in typical fashion as Milan produced arguably the best Champions League final performance of all time.

Patrolling the opposite flank was Roberto Donadoni, a man once named as “the best Italian footballer of the 1990s” by Michel Platini – a fine compliment given his competition for the title.

Donadoni was a creative footballer whose pride came from supplying his teammates, an unselfish talent and wonderful dribbler who made things happen for this great Milan side.

He was a fixture in the Milan teams of the late eighties and nineties, winning six league titles and featuring in five Champions League finals, winning three.

Milan’s leading goalscorer during the 1993/94 season, Massaro was the hero of the opening 45 minutes of the Champions League final, scoring twice to put Fabio Capello’s side in control.

Massaro’s 15 goals in all competitions proved his best season of a Milan career that spanned eight seasons and 229 appearances.

One of the great players of his era, Savicevic rose to prominence in a wonderfully talented Red Star Belgrade side, winning the European Cup in 1991 and finishing as runner-up for the Ballon d’Or before moving to Milan.

He acquired the nickname Il Genio (The Genius) during his time with the Italian side, with one of his most memorable moments coming in the 1994 final – netting his side’s third goal with an audacious lobbed finish to score one of the all-time classic Champions League final efforts.

Despite an often tempestuous relationship with Capello, Savicevic was a player capable of magic moments and delivered in some style to crown Milan champions of Europe against Barcelona.