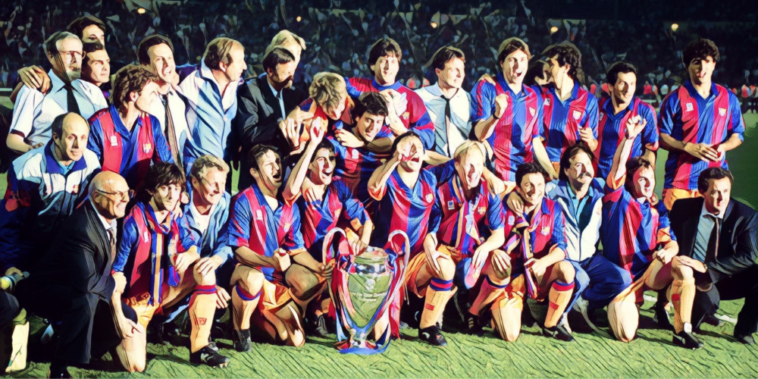 More than two decades after his departure from Barcelona and some six years after his passing, Johan Cruyff’s impact in football is still felt to this very day.

Cruyff remains one of the greatest footballers to have ever played the game and arguably the finest footballing mind the sport has seen, his ideologies and ideas still ingrained into the fabric of the modern Barcelona.

Cruyff’s playing career saw him star as the inspiration of an iconic Ajax side in the 1970s, winning three consecutive European Cups with the Dutch outfit as Rinus Michels’ ‘Total Football’ conquered the continent.

It would be that philosophy that Cruyff incorporated into his own managerial style, the principles learnt under Michels evident as the Dutchman compiled a side at Barcelona that would become forever known as the ‘Dream Team’.

Cruyff had spent five years of his playing career with Barcelona after moving to Catalonia in a world-record deal, inspiring the Spanish side to a first league title in 14 years during his debut season to win the Ballon d’Or, his third coronation as European Footballer of the Year.

By the time of his return to the club as manager in 1988, Barcelona were again struggling to compete with the behemoth that is Real Madrid, the capital club winning five consecutive Spanish league titles between 1986 and 1990.

Barcelona, by contrast, had won just one in the 14 years that preceded Cruyff’s arrival as manager.

The former favourite quickly began stamping his imprint on the side he inherited with a focus on possession-based play, the simplicity Cruyff craved reflected in the one-touch football that became a hallmark of his side.

Silverware arrived during his debut campaign as Barcelona won the UEFA Cup Winners’ Cup in 1988/89, beating Sampdoria 2-0 in the final in Bern, Switzerland.

That summer saw Cruyff’s side begin to truly take shape as Ronald Koeman arrived from Ajax, the Dutchman having previously coached his compatriot during his time in charge of the Amsterdam outfit.

Michael Laudrup also arrived as one of the club’s three designated foreign players, the talented Danish midfielder having struggled to make an impact during two seasons with Juventus.

Barcelona again struggled to compete with Real Madrid for the title in 1989/90 but added more silverware with Copa del Rey success. Cruyff added to his options once more after signing fiery forward Hristo Stoichkov, who arrived after winning the European Golden Shoe with CSKA Sofia.

There was also a promotion to the senior side for Pep Guardiola, the academy graduate having been converted from a winger into a central role on the recommendation of Cruyff before breaking into the first-team set up.

With Stoichkov, Koeman and Laudrup providing the foreign flair and a talented home-grown core including Guardiola, Andoni Zubizarreta and José Mari Bakero, Barcelona were crowned as champions for the first time in six seasons in 1990/91, finishing 10 points clear of Real Madrid.

Stoichkov starred as the lead of a formidable frontline to score 22 goals in all competitions, a figure he replicated the following campaign in a historic season for the Catalans.

The league title was retained on the final day of the season following a fiercely contested title race between the champions and both Madrid sides, Barcelona finishing just one point clear of Real with Atletico just a further point behind.

Back-to-back titles had cemented Cruyff’s legacy at the Camp Nou, though further history was made as Barcelona returned to the European Cup, progressing to a final meeting with Sampdoria at Wembley.

Ronald Koeman’s free-kick proved the difference as the Catalans secured a 1-0 win, the club crowned as champions of Europe for the very first time in London.

He won the European Cup for Barcelona in 1992 with this cracking extra-time free kick 🔥pic.twitter.com/eITvfmUvQT

Cruyff’s side won a third consecutive league title the following campaign after again narrowly edging Real Madrid for the championship, capitalising their bitter rivals final day defeat at Tenerife for to retain their La Liga crown.

Perhaps the best footballing moments of the ‘Dream Team’ came in the following campaign, the side – bolstered further by the capture of Romario from PSV Eindhoven – playing some truly spellbinding football on occasion to win a fourth title in succession.

Barcelona scored 91 goals – including that 5-0 thrashing of Real Madrid – to hold off the surprise challenge of Deportivo La Coruna for the title via goal difference, though Cruyff’s side were reliant on a missed penalty as their nearest challengers agonisingly squandered the chance to win a first ever major trophy.

Romario finished as the division’s leading scorer with 30 goals in just 33 league appearances, though the side were blighted by inconsistency, as performances of footballing fantasy were mixed with disappointing displays on occasion.

That form transferred onto the European stage as they reached the Champions League final, only to suffer a shock 4-0 defeat to AC Milan in a contest regarded as one of the great final upsets.

Defeat to the Rossoneri proved the beginning of the end for the Dream Team, rising tensions in the dressing room leading to the dismantling of an iconic side and the end of an era.

Laudrup – disillusioned by long periods on the bench amid the three foreign player rule – made the controversial decision to leave for hated rivals Real Madrid, inspiring Los Blancos to the title in his first season at the Bernabeu.

Cruyff failed to win trophies over the next two seasons before his sacking amid a fall-out with chairman Josep Lluís Núñez, leaving the club as both their longest-serving and most successful manager of all time.

The era of Cruyff’s Dream Team remains imprinted on the minds of football fans of all ages, but it is perhaps the lasting impression of his ideas that is his truest legacy at the Camp Nou.

Cruyff’s record as the club’s most successful coach was broken by one of his many protégés, as Pep Guardiola took charge of the Catalan outfit to oversee an unprecedented period of success that brought 14 trophies in just four seasons.

Cruyff transformed Barcelona forevermore and his impact will last the test of time, a man whose methods brought success with style and created a culture the envy of world football.