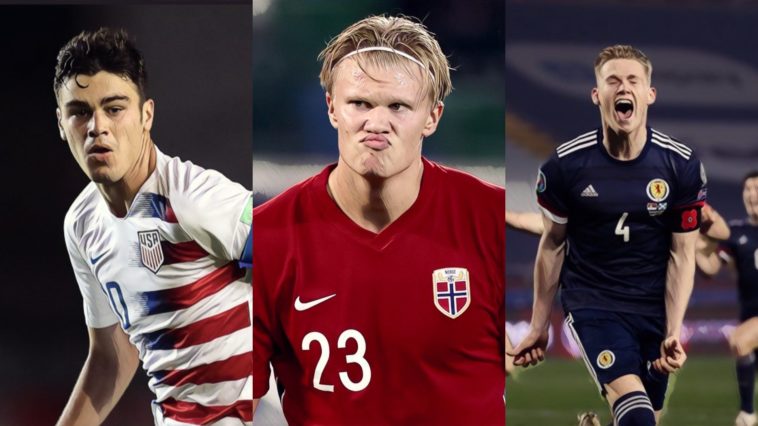 The England national football team has almost certainly never experienced the level of depth that it currently beholds.

Sure, the Three Lions had the so-called Golden Generation, but beyond a very strong starting XI it doesn’t compare to the competition for places in Gareth Southgate’s squad at the moment.

There are arguably two players for each position who could claim a starting role in the upcoming European Championship, and in the case of a few other positions there are multiple options all playing to a very high level.

Beyond them are even more footballers who could theoretically have played for England, but have chosen to represent another nation they’re linked to because of parentage, grandparentage or nationalisation.

With reports suggesting that Bayern Munich’s Jamal Musiala is about to snub England in favour of playing for Germany, we’ve compiled a list of such players.

Some of these men would certainly contest or even walk into the England team, but never considered representing them, while others had no chance whatsoever of breaking into the national setup and decided to have an international career elsewhere.

Ten English-born footballers who play for other countries:

Born in Leeds, Erling Haaland is the son of former Leeds United and Manchester City midfielder Alf-Inge Håland. The striker moved back to his parents’ hometown of Bryne at the age of three, and played for the same club where his father first started his football career.

Haaland exploded onto the scene in last season’s Champions League for Salzburg, and has continued his otherworldly form this season for Borussia Dortmund. The powerful forward will not be heading to Euro 2020, however, as his Norway side fell to Serbia in the play-off semi-finals last October.

There can be little doubt that had Haaland chosen to represent England over his father’s homeland then he would be on Gareth Southgate’s squad list for the Euros instead.

Born in Sunderland in 2002(!), Gio Reyna represents the US national team just as his father Claudio did rather than line out for the country of his birth.

Reyna Sr had a very good career in Europe, playing for Bayer Leverkusen, Rangers, Sunderland and Manchester City, but his son has a much higher ceiling judging by his stellar performances since making his debut as a 17-year-old last year.

The FA may come to regret not convincing him to commit to England when he was younger, although with so much depth in the final third at the moment one wonders where they could even fit him in.

He'll do well to ever score a better one 😲 pic.twitter.com/iNDZDIP1Mb

A Lancastrian by birth, Scott McTominay has been a Scotland international since 2018, qualifying through his Scottish-born father.

The midfielder, who has made 116 appearances for Manchester United since his debut in 2017, has quickly become a regular for the Scots. He’s won 19 caps thus far, and played a role in the side’s qualification for Euro 2020.

Many Englishmen have represented Scotland over the years, although not too many have have gone the other way.

Born in Hull, Daniel James qualifies for Wales through his late father Kevan. The Manchester United winger was given his full debut under the club’s most famous Welsh winger, Ryan Giggs, in 2018. He has won 17 caps and scored three goals for the Red Dragons.

Unsurprisingly Wales have always had their fair share of English-players line out for them, given the two nations close proximity.

Liverpool youngster Ben Woodburn is another young Welsh international from England, having been born in Nottingham in 1999.

Born in Solihull, Will Grigg came to prominence during his 25-goal campaign that helped Wigan win the 2015/16 League One title, although it was the chant “Will Grigg’s On Fire” that shot him to fame more than anything.

Eligible to play for Northern Ireland through a grandparent, the striker went to Euro 2016 but didn’t play a single minute at the tournament. Grigg has won 13 caps and scored two goals for Norn Iron, but the MK Dons loanee hasn’t made an appearance for the team since 2018.

Born in Crayford in South East London to Nigerian parents, Semi Ajayi’s prospects of playing for the England national team were never realistic. The centre-back instead declared for Nigeria as a youngster, for who he’s won 13 caps.

The West Brom defender is finally a Premier League player this season having played at every level from the National League up. Ajayi was signed as a young prospect by Charlton, Arsenal and Cardiff, but never played a minute for any of them.

Born in London, Ciaran Clark qualifies to play for the Republic of Ireland through his Irish-born parents. The Newcastle United centre-back is a regular for the national team, earning 34 caps since 2011, although he played for England all the way through the youth ranks.

Clark is just one of many players born in the UK to line out for the Boys In Green, such is the vastness of the country’s diaspora going back decades. This is one of the key reasons Ireland did so well under Jack Charlton, and to this day the team is littered with foreign-born internationals.

In the 1996/97 Premier League season, Georgios Donis moved to Blackburn Rovers from Panathinaikos. He only spent one campaign there before moving to Sheffield United, but he had a son while in Blackburn.

That son turned out to be Tasos Donis, who himself became a footballer. The Greek footballer was a promising prospect in his teen years, joining the Juventus academy in 2013. The centre forward didn’t cut the grade in Italy and after being bounced around a number of clubs, the 24-year-old now plays in the Eredivisie for VVV-Venlo.

Born in Birmingham, Romaine Sawyers was raised by a single mother who also raised foster children. At international level the midfielder plays for Saint Kitts and Nevis, the smallest sovereign state in the western hemisphere. He has won 26 caps and scored four goals for the island nation since 2012.

Sawyers was let go by West Brom in 2013 without making a single appearance for the club, but he returned after impressing during a three-year spell with Brentford to help the Baggies earn promotion to the Premier League last season.

Born in the London Borough of Southwark, Ola Aina came through the ranks at Chelsea. After making just three appearances for the Blues, he moved to Serie A outfit Torino in 2019, but has been on loan at Fulham this season.

Aina represented England at youth level, but switched allegiance after gaining a Nigerian passport in 2017. He normally plays as a wing-back, but has shown throughout the current campaign that he’s capable of playing in a number of roles.

The 24-year-old, who has won 17 caps for the Super Eagles, missed out on the final squad for the 2018 World Cup, but did play a part in the country’s third-place finish at the African Cup of Nations in 2019.

Honourable mentions to Leicester City’s Wes Morgan and Michael Hector of Fulham, both of whom have represented Jamaica, a national team that has traditionally always featured a lot of English-born players.