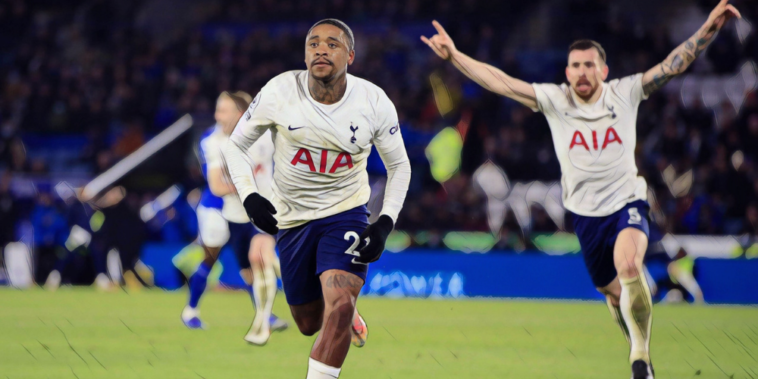 Antonio Conte insists Steven Bergwijn is an ‘important’ player at Tottenham following the winger’s dramatic stoppage-time brace in the club’s 3-2 win at Leicester.

Bergwijn came off the bench to score two late goals at the King Power Stadium as Spurs came from behind to snatch an improbable victory at Leicester on Wednesday evening.

The Netherlands international slammed home a 95th-minute equaliser for his first Premier League goal of the season, before racing clear to round Kasper Schmeichel and score a second just moments later to seal a thrilling victory for the North Londoners.

The 24-year-old has struggled for minutes this season and has started just three league fixtures during the current campaign, with Ajax having expressed an interest in signing the winger.

Ajax have seen two formal bids rejected for Bergwijn this month and Conte insists the Dutchman has an ‘important’ role to play in his plans.

Incredible impact by Steven Bergwijn tonight. Ajax submitted two official bids for him in the last few days – Tottenham refused as they wanted much more than €15m. ⚪️ #THFC

…and it looks complicated for Ajax now. Two goals in 79 seconds. pic.twitter.com/K2sJhzVxXl

“In the past when someone asks me about Steven Bergwijn, I was very clear. I said that for me he is an important player because he has characteristics that in our squad we don’t have many creative players,” Conte said to BT Sport.

“He is very good in one vs one, good to beat the man. He can play striker, he can play number 10 and for us, for me, he is an important player and we have to try to improve, to become stronger, not to lose a player and become less strong.

“Steven is a player that if he’s in good physical condition and he has good fitness, he can start the games or he can come in and change the game. For me, I think he’s an important player and you know very well the player has to be happy and I think the player is happy to stay with us and play for Tottenham.”