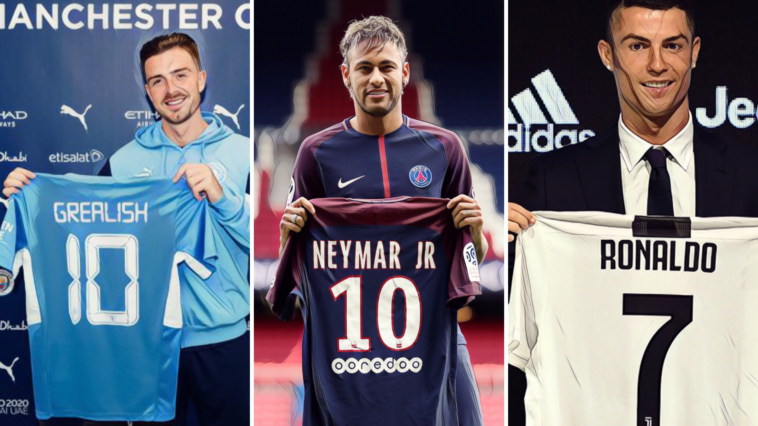 Transfer fees have never been higher with even a global pandemic having failed to completely slow the upward trajectory of deals across Europe.

Following Grealish’s record-breaking move to the Etihad, we’ve decided to look at and compare the transfer records from Europe’s top five major leagues.

Bundesliga sides have often spent within their means in comparison to contemporaries on the continent, with just four sides – Wolfsburg, Hertha Berlin, Bayern Munich and RB Leipzig – ranking amongst the top 30 sides in Europe for net spend over the past five years.

It comes as little surprise to see Bayern Munich as the side responsible for the most expensive Bundesliga purchase in history, having spent £68m to sign Lucas Hernandez from Atletico Madrid in 2019.

The fee almost doubled the previous club and divisional landmark that was set by Corentin Tolisso’s £37m move to Bayern from Lyon a year earlier, though ranks only fifth amongst Europe’s top five leagues.

Bayern are responsible for nine of the 10 most expensive signings in Bundesliga history, with Julian Draxler’s move from Schalke to Wolfsburg the anomaly amongst the list.

Juventus broke the Serie A transfer record to sign Cristiano Ronaldo from Real Madrid, spending £88m on the Portuguese superstar in 2018.

Serie A have been no strangers to record-breaking sums historically having broken the world transfer record six times between 1990 and 2000, but spending amongst Italy’s biggest clubs has fallen behind the likes of Spain and England since the turn of the century.

Ronaldo’s move to Juventus broke the previous record set by Gonzalo Higuain’s own move to Turin two seasons earlier, the Argentine having signed for the Bianconeri from Napoli in a deal worth £75.3m.

Juventus’ investment came despite Ronaldo having turned 33, though the five-time Ballon d’Or winner has since returned two league titles and 101 goals in 133 appearances.

The spending of English clubs has often dwarfed that of those on the continent in recent years, the lucrative nature of the Premier League allowing clubs across the division to invest significantly.

Last summer the Premier League’s spend of £1.26bn was more than the Bundesliga, La Liga and Ligue 1 combined, though England’s top tier ranks only third in terms of divisional transfer record.

Jack Grealish’s move to Manchester City has made the midfielder the league’s first £100m player, with Spain having seen five players move in deals that could rise beyond that figure in comparison.

Grealish’s move to the Etihad eclipses the £89m figure that took Paul Pogba to Manchester United from Juventus in 2016, a fee which represented a world record deal at the time of the transfer.

Barcelona’s crippling financial situation has come as a result of some reckless spending in recent seasons, the club’s most extravagant purchase the £142m capture of Philippe Coutinho from Liverpool.

Coutinho had looked like an idealistic fit at the Camp Nou during five impressive seasons at Anfield, but has proven a major disappointment since his record-breaking arrival in January 2018 and faces an uncertain future at present.

La Liga had previously held the world transfer record between 2000 and 2016, a run that included five separate transfers and the moves of Zinedine Zidane and Cristiano Ronaldo to Real Madrid.

The transfer that changed the transfer market forevermore, Paris Saint-Germain more that doubled the world transfer record after activating the release clause in Neymar’s Barcelona contract.

The deal saw Neymar move to France for a fee of £198m and subsequently saw the £100m figure eclipsed on several occasions across the following summers, as the forward’s record-breaking transfer inflated the market in quick-fire fashion.

PSG have invested huge sums to compete at the top level of European football over the past decade, with only Monaco joining the capital club amongst the top 25 most expensive signings in Ligue 1 history.

PSG are also responsible for the two most expensive transfers in football history, having also spent around £163m to sign Kylian Mbappe from Monaco.