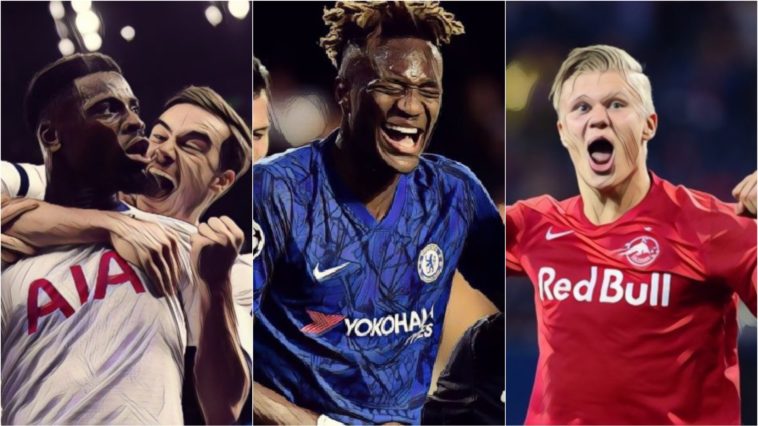 The penultimate round of games have pretty much sewn up which teams are going through to the Champions League knockout stages, so here are our talking points from matchday 5:

When making some pre-season predictions, our cast of writers and podcasters prognosticated that Tottenham Hotspur would comfortably finish third in the Premier League. Well, so much for that. In the opening twelve league matches of the 2019/20 campaign, Spurs won just three of them.

And yet, despite their awfulness up to that point, you could still see why it was not an outlandish prediction. The north London outfit still have a very good squad that they (finally) strengthened with two excellent signings in midfield, who Mauricio Pochettino had consistently gotten the best out of.

It wasn’t just the results that changed our minds on that front, but the performances. They have been playing pretty much all year like a mid-table team – until Jose Mourinho came along. Although they have given away some cheap goals in his first two games in charge, Spurs looked far superior in the wins over West Ham United and Olympiakos than they have for a long time.

A change in tactics and approach from the new manager has helped, but you also get the impression that the players are actually trying a leg. That doesn’t necessarily reflect well on them; you could tell that only a handful of players were putting in the effort this season, whereas a large contingent had either stopped playing for the manager or wanted out of the club (or both).

The main thing we’ve learned this past week though, is that Spurs are in fact still a good team. After scoring seven goals in two games, they’ve now qualified for the knockout stages and top six in the league is still very much within their grasp. This season is not a dead rubber and I’m even tempted to suggest that another run to the Champions League final isn’t out of the question.

That might sound outlandish, but if they get a kind draw and some good luck with injuries, then why not? They certainly have the right man in charge to go deep in the competition anyway.

The unlikeliest Champions League comebacks ever

Chelsea can thank their lucky stars

Chelsea’s 2-2 draw away to Valencia was by no means a bad result, as their destiny is still in their own hands; provided they beat Lille at Stamford Bridge in a fortnight, they will be in the draw for the first knockout round.

Luck was on their side at the Mestalla, as this was a game they could have easily lost by several goals. Yes, Valencia’s equaliser was one of the flukiest you will ever see, but the home side missed two absolute sitters and a penalty, which was saved by Kepa Arrizabalaga.

The visitors gave up 18 shots, 13 of which were in the penalty area, illustrating just how wide open they were. The Blues created plenty of chances for themselves as well though, with three of their 16 attempts from inside the six yard box. Christian Pulisic scored one of them in the 49th minute for the lead, but something tells me Frank Lampard was mightily relieved to get a point after Rodrigo Moreno shot wide from a few yards out in injury time.

The biggest slice of luck arguably relates to Tammy Abraham, though. The English striker made an awkward landing in the first-half and looked to be in considerable pain as he tried to walk to the dressing room. A stretcher was eventually brought out for him.

Fortunately for Chelsea, it looks as if it was nothing serious and he won’t miss much, if any, game time, which is great news for the team and the thousands of Fantasy Premier League managers sweating over his fitness.

The entire Blues team has been playing very well under Frank Lampard, it’s not down to just one player, but it’s not an exaggeration to say that Abraham has been a game changer for the south west London outfit. When Eden Hazard left for Real Madrid in the summer, this writer wondered how they could possibly replace the goals and assists he provided.

Of the 63 Premier League goals the team scored last season, Hazard played a part in 31 of them, just under half. Losing the Belgian wizard without being able to replace him in the transfer was potentially a disaster waiting to happen, and one of the reasons I felt they would struggle this season.

Kepa won't want to look at this again! ?

Late drama at the Mestalla means Chelsea share the points with Valencia.

Group H is going down to the wire… pic.twitter.com/CPchOnHnJp

But Abraham’s production has been outstanding so far this season; he is the second top scorer in the league at present with 10 goals, 36% of the club’s total tally. Mason Mount and Christian Pulisic have also chipped in generously, but the 22-year-old has been the spearhead of this attack. I’ve long been an admirer of the forward, but even I didn’t expect him to make the leap so quickly.

Abraham looks like he is an elite finisher, which makes his availability all the more important. They have capable replacements in Michy Batshuayi and Olivier Giroud, but neither can replicate his form. Even with a sizeable points gap between them and those chasing a top-four spot, they can’t afford an injury in that position.

The most boring finals of the Champions League era

Losing a two goal lead to draw 2-2 isn’t exactly a great result – especially when it’s at home and costs you any chance of topping the group. But Real Madrid have a lot to be positive about from their meeting with Paris St Germain on Tuesday.

The Spanish side looked far better against a good team than they have for most of the season, with Zinedine Zidane finally getting his squad to up their performance levels in recent weeks. They outshot the visitors by 27-13 and hit the woodwork three times. Luck was on their side when the referee inexplicably reversed a Thibaut Courtois red card and penalty for PSG with a free-kick for Madrid, but overall they deserved to win here.

⚽? 7⃣ goals in 4⃣ matches for our No.9!
? @Benzema ?#HalaMadrid pic.twitter.com/k7vThbFJYY

Real even had a glorious chance to win late on but Rodrygo skewed his effort wide, before Gareth Bale hit the post from a free-kick. Most promisingly, Eden Hazard appears to be returning to the kind of form that earned him a move to the Bernabeu in the first place.

The real kicker for Real here was they would have won had it not been for the outstanding work of one of their former players, as Keylor Navas made 10 saves to keep them in the game. The gave the Parisians the platform for Kylian Mbappe and Pablo Sarabia to cancel out a Karim Benzema brace.

With every passing week, Erling Braut Haaland rubbishes the notion that he is a flash in the pan. The Norwegian’s latest exploits saw him provide a goal and an assist after coming on with half an hour to go in Salzburg’s 4-1 thrashing of Genk, giving them hope of qualifying for the knockout round if they can beat Liverpool at home next month.

This season Haaland has scored 15 goals and made six assists in just 12 matches in the Austrian Bundesliga. It can be easy to dismiss the quality of the league he’s performing in, but the flaxen-haired striker has also done it in the Champions League, scoring in every round of the group stage thus far.

Speculation linking him with a move to Manchester United and a potential reunion with his former Molde boss Ole Gunnar Solskjær continues to build, but there can be little doubt that Haaland will be making a big-money move somewhere in the near future.

Barcelona continue to depend too much on Messi

Another Lionel Messi masterclass. Against Borussia Dortmund on Wednesday, he increased his goal tally for Barcelona to 613 and his assists to 237 in 700 club games.

On the half hour mark he played a simple five-yard pass which took out the entire backline, setting up Luis Suarez for the opener. Minutes later the roles reversed, with Messi on the receiving end of some nice link-up play with the Uruguayan following some clever movement. 2-0.

It didn’t end there either. 38 seconds into the second-half, he pulled off a perfect one-touch through ball for Antoine Griezmann as two defenders quickly closed in on him. The resulting effort was poor – the wide forward shot straight at goalkeeper Roman Burki – but the accuracy and timing of the attempted assist was incredible.

In the 67th minute Messi picked up the ball in his own half, before driving through the middle of the pitch and releasing Griezmann with another inch-perfect pass into the exact same area as before. The Frenchman didn’t waste the chance this time, dispatching the ball low into the far corner.

That came just moments after Messi had a headed attempt inside the six yard box and seven minutes before he hit the crossbar with a direct free kick. This is all to say that the Argentine playmaker runs the show at Barcelona and without him they would be lost.

Players to register double figures for successful dribbles in a Champions League match this season:

Big whoop, right? We all knew that, he’s the G.O.A.T after all. And yet, the extent to which they depend on him is startling. This writer has banged this drum before, but it’s concerning that almost four months into the season this is still the case. Any team containing someone of Messi’s talent would lean on him heavily, but their lack of creativity outside of their number 10 truly is maddening.

What was the point in spending a ton of money on Frenkie de Jong if they were just going to depend on their 32-year-old playmaker even more than they did last season? If anything it is reinforcing his greatness, especially as he gets older; it’s being wasted, though, by Barcelona and Ernesto Valverde, who have turned one of the most expensively assembled squads ever into a one-man team.

As alluded to above, the referee made an absolutely shambolic call in the Real Madrid versus PSG match. Artur Dias sent off Thibaut Courtois after the goalkeeper took down Mauro Icardi in the box without getting near the ball. It was hard to argue with the decision; the Italian forward may not have been clean through on goal, but it was a clumsy tackle and he was the last man.

We waited for input from the VAR, and then the official went over to the screen to check the play again. Only he wasn’t checking that play, he was checking what happened in the buildup. Idrissa Gana Gueye had seemingly pushed Marcelo to win the ball and start the attack.

Not only is this exactly opposite to the way people want to see VAR being used, it wasn’t a complete nonsensical call. The challenge by the former Everton midfielder was basically nothing, but more importantly, the referee was standing right in front of it when it happened. He didn’t miss it at the time, it wasn’t a clear and obvious error, and it was hardly a foul in the first place. But he brought it back anyway.

Everyone who watches football wants to see the game refereed better and the introduction of video technology was intended as a means to help the officials do their job, something we can all get behind. But when they themselves use it in such a ridiculous fashion, then maybe there is no helping them.