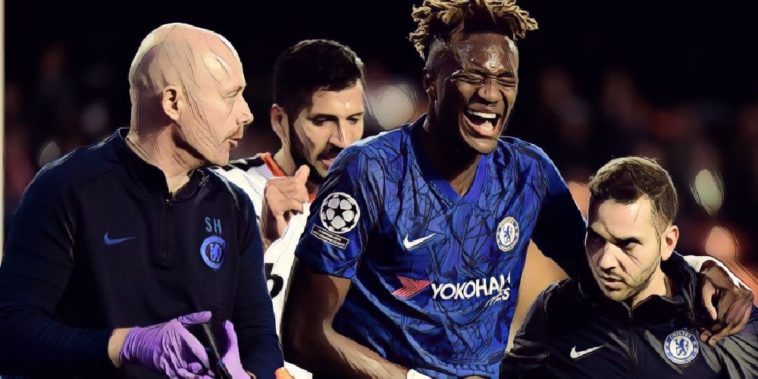 Frank Lampard has provided a positive update on Tammy Abraham after the striker suffered a ‘severe’ looking injury in Chelsea’s 2-2 draw with Valencia.

Lampard has entrusted the 22-year-old as Chelsea‘s first-choice striker this season having spent the last few years away from the club on loan with the likes of Bristol City, Swansea and Aston Villa.

After finally being afforded a chance at Stamford Bridge, the England international is among the Premier League‘s top scorers this season, scoring 10 goals in his 13 top-flight appearances, also netting one against Lille earlier in the Blues’ Champions League campaign.

However, Chelsea fans were left fearing the worst when the striker was stretchered from the field just before half-time in their 2-2 draw with Valencia on Wednesday evening, Frank Lampard admitting the bang on the hip ‘looked quite severe’ with Abraham looking clearly in pain.

However, speaking afterwards, Lampard was able to offer a rosier outlook on Abraham’s injury.

“He’s in the dressing room now,” Lampard said at his post-match press conference.

“It looked quite severe at half-time, a strong bang on the hip, but the word after the game is it might not be as severe as we thought. That’s all I know.”

The 2-2 draw in the Mestalla means that neither Valencia nor Chelsea have yet secured their place in the last 16 draw of the Champions League, both sides currently sitting on eight points in Group H.