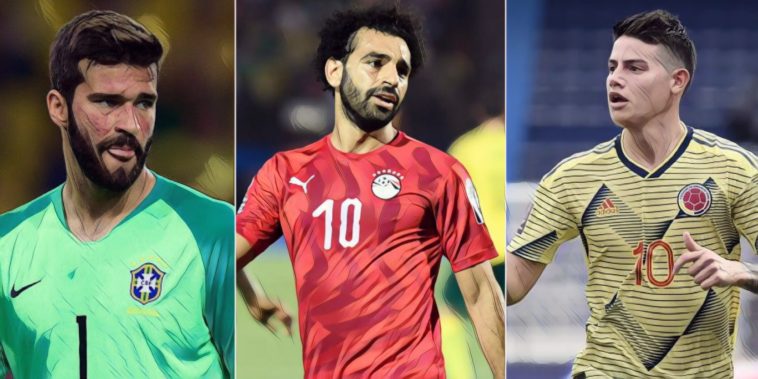 European football’s leading nations will compete to be crowned as the continent’s champions next summer, the final line-up for the delayed European Championships completed during the international break.

Next summer’s tournament will feature some of football’s finest and the Premier League is set to be well represented amongst the 24 competing teams, though there will be several huge names watching on with envy as a footballing festival begins.

Here is the best Premier League XI who won’t be at the Euros next summer:

Liverpool’s signing of Alisson is widely credited amongst the best pieces of business of the Jurgen Klopp era, the expensive outlay proving well worth the investment given the goalkeeper’s impact on Merseyside.

Champions League and Premier League winners’ medals have been accumulated by the Brazil number one who has provided a commanding and calming presence in goal, Alisson is regarded amongst the best shot-stoppers in world football at present.

Alisson has kept 37 clean sheets in 73 league fixtures for Liverpool and whilst he will not feature in next summer’s European Championships, the South American will be hoping to win further silverware with the national team in 2021. Brazil will be competing in the Copa America where they will be hoping to defend the title they won on home soil in 2019.

Latest unnecessary international break has been an omnishambles for football

Ireland missed out on a chance at Euro 2020 qualification after being defeated by Slovakia on penalties in October, with Alan Browne and Matt Doherty missing from the spot.

Doherty, however, may take some consolation from his inclusion in our best XI of players who won’t be featuring in the tournament, with the ‘Irish Cafu’ fittingly slotting in at right-back in our Brazil-dominated backline.

The Dubliner has been a regular provider of attacking intent from full-back since making the step-up to the Premier League two years ago, with only Liverpool duo Trent Alexander-Arnold and Andy Robertson having provided more goal contributions amongst defenders over the past two seasons.

Those impressive performances led to a summer switch to Tottenham Hotspur for the 28-year-old, who will be hoping to cement himself in Jose Mourinho’s side as the north London side seek major honours this season.

The second of five Brazilians included in our side, Thiago Silva has made an instant impact since moving to the Premier League with Chelsea during the summer.

Many questioned the wisdom in Chelsea’s signing of the veteran defender on a free transfer from Paris Saint-Germain, but Silva has quickly proven that class is permanent at the heart of the Blues’ backline.

The 36-year-old’s leadership and experience have been a welcome addition to Frank Lampard’s side, with the star having now contributed to eight clean sheets for club and country since the start of October.

There will be more difficult challenges awaiting for the centre-back as he continues to adapt to English football, though it’s been an impressive start for a player long regarded amongst the world’s best.

Fernandinho slots in alongside compatriot Silva at the heart of our defence, the Brazilian exerting his classy influence on the Manchester City backline in a centre-back role last season.

The veteran has been one of City’s greatest Premier League servants and continues to play an influential role for the side despite entering his mid-thirties, Fernandinho a key piece of the side which won back-to-back league titles under Pep Guardiola.

The former Shakhtar Donetsk player combines a tireless energy with tactical intelligence and earns his inclusion in our side over the likes of Liverpool’s Joel Matip and Arsenal’s Gabriel.

City teammate Aymeric Laporte could yet make this side as he continues to struggle to win favour at international level with France despite his consistent excellence at club level.

The fourth of five Brazilians we’ve included in our side, Premier League fans are yet to see the best of Alex Telles since his arrival at Manchester United during the summer.

Telles follows in a long line of his compatriots to follow the mantra that attack is the best form of defence, marauding forward from left-back and compiling a staggering record of goal involvements during his time with Porto.

The 27-year-old scored 11 goals and provided eight assists in 28 league starts for the Portuguese side last season, his prowess from set-pieces is set to offer Ole Gunnar Solskjaer side a different option this season.

Virgil van Dijk, Alisson and Mohamed Salah are just some of the signings largely credited with Liverpool’s transformation into England’s best side, but the importance of Fabinho should not be understated when it comes to the Reds’ success.

The Brazilian has been a dominant presence in the engine room since moving to the Premier League, anchoring the club’s midfield to allow their flying full-backs and forward three to wreak havoc on opposition defences.

Powerful and imposing, Fabinho snuffs out opposition attacks before helping launch Liverpool’s own, whilst he has showcased his versatility by filling in at centre-back on occasion so far this season.

Another midfield anchorman, Wilfred Ndidi has won his fair share of plaudits since signing for Leicester City three years ago.

The Nigerian international finished as the Premier League’s most prolific tackler in each of his first two campaigns before finishing behind only Manchester United’s Aaron Wan-Bissaka last season, his ability to regain and recycle possession making him invaluable to Brendan Rodgers’ side.

His absence this season has been a major blow to the Foxes, who will hope Ndidi can return as swiftly as possible to boost their Champions League hopes. The 23-year-old is a player with potential for further growth and one likely to be on the radar of England’s biggest clubs.

Tasked with providing the creativity in our midfield is Everton‘s new fan favourite James Rodriguez, the Colombian superstar having made quite an impression following his arrival on Merseyside.

Rodriguez has endured a frustrating period at Bayern Munich and Real Madrid but appears to have found a new home in the Premier League, pulling the strings for Carlo Ancelotti’s side as they seek a place in Europe next season.

The 29-year-old has dazzled with his touch and technique and has provided three goals and three assists in just seven league appearances, adding invention and quality to the Everton midfield without appearing to break a sweat.

Mohamed Salah has scored with relentless regularity since signing for Liverpool three years ago, establishing himself as one of the finest forwards in world football and an irreplaceable figure in the Reds’ side.

Salah has twice won the division’s Golden Boot and looks well placed to win the accolade for a third time this season, having scored eight times in eight league appearances to sit as the joint-leading scorer in the Premier League.

The Egyptian international is lightning quick and often ruthless when presented with goalscoring opportunities, his 32 goals during the 2017/18 season a record for a 38-game campaign.

The 28-year-old has also twice been named as African Footballer of the Year and recently reached a century of goals for Liverpool in all competitions, with few having contributed more to the club’s Champions League and Premier League success over the past two seasons.

Sadio Mane joins Liverpool teammate Salah in an all-African frontline, the Senegal international a player who has regularly delivered for the Premier League champions and is amongst the most captivating talents in the English game.

Mane was Jurgen Klopp’s first major signing at Anfield and ranks amongst his finest, having plundered 86 goals in 181 appearances in all competitions, which includes winning a share of the Golden Boot during the 2018/19 campaign.

The 28-year-old possesses scintillating speed and a tigerish aggression in pressing opponents, setting the tempo from the front and producing moments of magic when in possession.

Mane has now scored 20+ goals in all competitions in each of the past three seasons and remains a vital part of the Reds’ side as they seek back-to-back league titles.

Completing a forward line full of speed, skill and goals is Pierre-Emerick Aubameyang, the Gabon international the spearhead of Arsenal’s new-look side under Mikel Arteta.

Aubameyang arrived in a then club-record deal from Borussia Dortmund in January 2018 and has proven a shrewd investment for the north London side, becoming the fastest Gunners player to reach 50 Premier League goals – achieving the feat in just 79 appearances.

That haul included winning the 2018/19 Golden Boot, an accolade he shared alongside Liverpool duo Salah and Mane in a three-way tie following a 22-goal campaign.

His importance to the side was emphasised with his appointment as club captain and he remains arguably the sole world-class talent in their ranks, even if he has had a disappointing start to the current campaign.

Form is temporary and class is permanent, however, with few expecting his current barren run to last too much longer.

See Also: Why Ryan Reynolds and Rob McElhenney are taking over non-league Wrexham

Listen to the latest edition of the Fantasy Faithful podcast with @TheNoveltyAct @TheTinkerMen and @HJLDiamondSport.

We looked ahead to GW9, providing our captain's picks, differentials and transfer tips. #fpl https://t.co/PDf2YvEWb9