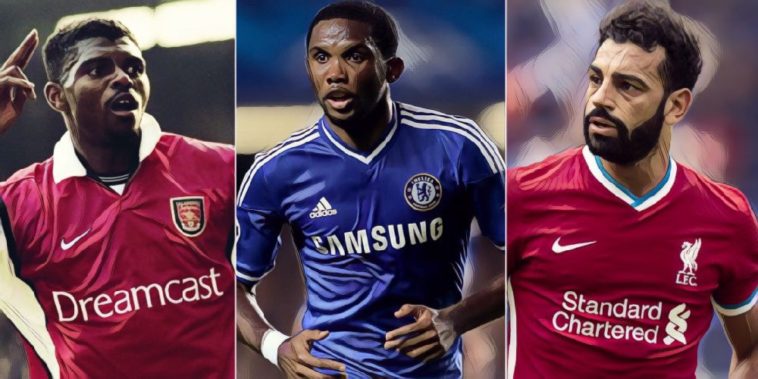 African football has produced some of the game’s most exciting talents of modern times, a whole host of the continent’s leading names having thrived in Europe’s major leagues.

Many of Africa’s finest footballers have showcased their talents in the Premier League, with an incredible eight of the past nine African Footballer of the Year awards being received by players starring for clubs in England.

We’ve decided to look back at the notable names to have won the award and played in the Premier League, a stellar list of marquee talents including some of the most iconic African players of the modern era:

Widely regarded amongst the greatest African footballers of all-time, George Weah became the first – and so far only – African player to claim the Ballon d’Or, winning the game’s greatest individual honour alongside the FIFA World Player of the Year award in 1995.

That year saw the Liberian win the third of his three African Footballer of the Year accolades following an impressive stint at Paris Saint-German, before enjoying a successful five-year spell with AC Milan, winning two league titles with the Rossoneri.

Weah’s spell in the Premier League, unfortunately, came past the peak of his considerable powers, though he enjoyed success during a loan spell at Chelsea and won the FA Cup, before a short and less successful spell at Manchester City.

Nwankwo Kanu rose to prominence as part of a youthful Ajax side which conquered Europe in the mid-nineties, before leading Nigeria to Olympic gold medal success in 1996 to be crowned as Africa’s Footballer of the Year.

His rapid rise resulted in a move to Inter Milan, though he would make just 12 league appearances, spending a significant spell sidelined following an operation to correct a serious heart defect.

Kanu moved to the Premier League in 1999 as he joined Arsenal and quickly established himself as a fans’ favourite, his nimble footwork and goalscoring instinct helping him thrive in English football.

He was named as African Footballer of the Year for a second time that year after scoring 16 goals in all competitions – including a stunning hat-trick at Chelsea – and spent a further decade in the Premier League.

He won two league titles and two FA Cups at Arsenal before winning a third FA Cup with Portsmouth, scoring the winning goal in the club’s 2008 final victory over Cardiff.

Peter Ndlovu: The first ever African footballer in the Premier League

Mustapha Hadji’s impressive performances at the 1998 World Cup saw the exciting midfielder named as Africa’s finest footballer, before the Moroccan international moved to the Premier League with Coventry City the following year.

Hadji’s fleet-footed skills and ability to beat players made him a popular figure during two seasons at Coventry, his arrival sparking a brief trend of supporters turning up to Highfield Road in fezzes.

Hadji was unable to keep the Sky Blues in the top flight, however, and joined Aston Villa upon their relegation in 2000, his time at Villa Park proving underwhelming as he struggled for opportunities during a three-year spell before signing for Espanyol.

Premier League fans may struggle to remember Patrick M’Boma’s spell in the Premier League, the Cameroon international scoring just one goal in nine appearances during a brief loan spell at Sunderland in 2002.

M’Boma had won the African Footballer of the Year award two years earlier after helping The Indomitable Lions to Olympic gold medal and African Cup of Nations success, scoring prolifically during the latter triumph including netting in the final victory over Nigeria.

M’Boma scored 33 goals in 57 appearances during a memorable international career but often struggled to replicate those feats at club level, the best spells of his career coming during spells in Japanese football with Gamba Osaka and Tokyo Verdy.

El-Hadji Diouf starred for a Senegal side who shocked the world by beating holders France at the 2002 World Cup in Japan and South Korea, the African nation reaching the last-16 in a memorable tournament.

Diouf also helped the Senegalese to the final of the African Cup of Nations and was named as the continent’s best player for a second successive year, his performances earning him back-to-back accolades in 2001 and 2002.

Liverpool made their move to sign the promising forward but it proved an unhappy spell on Merseyside for the controversial and colourful Diouf, his second season seeing him become the first number nine in the Reds’ history to go an entire season without scoring.

Diouf later had spells at the likes of Bolton, Sunderland and Blackburn, though too often found himself in the headlines for all the wrong reasons.

Samuel Eto’o ranks as one of the continent’s greatest footballing exports with no player having ever been crowned as African Footballer of the Year on more occasions than his four, the former Cameroon international one of world football’s finest during the peak of his career at Barcelona and Inter Milan.

Eto’o won the accolade for three successive years between 2003 and 2005, his first coming with Mallorca before moving to Barcelona, where he won three league titles and two Champions League trophies during a spell that delivered 130 goals in 199 appearances.

The forward then helped Inter Milan to Italian football’s first ever continental treble to win the accolade for a fourth time in 2010, before enjoying brief spells in the Premier League at Chelsea and Everton.

Unquestionably one of the greatest footballers Africa has produced, Eto’o scored almost 400 goals in a career that delivered huge team and individual success.

Didier Drogba became a talismanic figure during a glittering Premier League career at Chelsea, establishing himself as one of the most important figures in the history of the west London side.

The Ivorian won back-to-back league titles upon arriving at Stamford Bridge as the billionaire-backed Blues became the new dominant force in English football, with Drogba named as Africa’s finest footballer during the second of those campaigns in 2006.

Drogba became a two-time winner of the award in 2009 during a career-best season for Chelsea, the forward scoring 37 goals in all competitions to win the Premier League’s Golden Boot and secure a domestic double.

Amongst the most influential signings in Chelsea history, Drogba won four league titles, seven domestic cups and the Champions League amongst his honours over two spells with the Blues.

Frederic Kanoute enjoyed a five-year spell in the Premier League representing both West Ham and Tottenham, though it was following the forward’s departure that he truly starred.

Kanoute had impressed in England but a move to Sevilla truly unlocked his potential, with the Mali international winning four major honours and scoring 136 goals in 290 appearances for the Spanish side.

Amongst those honours included a Europa League and Copa del Rey double during the 2006/07 season, a campaign which saw Kanoute score 30 goals in all competitions to be named as Africa’s Footballer of the Year – becoming the first Europe-born player to win the award.

Togolese football celebrated their first-ever African Footballer of the Year winner in 2008, with Arsenal’s Emmanuel Adebayor named as the continent’s best player following a prolific spell for the north London side.

Adebayor flourished as the Gunner’s chief goal threat following Thierry Henry’s departure to Barcelona, scoring 30 goals during the 2007/08 season before enjoying a fine start to the following season.

His performances saw him recognised ahead of Egypt’s Mohamed Aboutrika and Ghana’s Michael Essien, Adebayor scoring 62 goals in 142 appearances over a four-year spell with Arsenal before joining Manchester City.

The talented target-man later had spells with both Tottenham and Crystal Palace, his 97 Premier League goals bettered by only Didier Drogba amongst all African players.

The joint-record holder of four African Player of the Year titles alongside Eto’o, former Barcelona and Manchester City midfielder Toure would scoop the award in four successive years between 2011 and 2014.

Each of Toure’s awards came during his time in the Premier League as he played a prominent role in City’s rapid rise as a dominant force in English football, scoring the decisive goal to win the club’s first major trophy in 35 years with FA Cup success in 2011, before playing an influential part in the club’s title-winning teams of 2012 and 2014.

Toure won six major honours during a trophy-laden spell at the Etihad that delivered 316 appearances and 79 goals, adding to his collection of silverware that included two La Liga titles and the Champions League whilst at Barcelona.

Gabon’s first and only winner of the award, Pierre-Emerick Aubameyang has established himself as one of the most dangerous forwards in European football over recent seasons.

Aubameyang’s coronation as Africa’s finest came after a prolific spell at Borussia Dortmund, finishing ahead of Yaya Toure and Andre Ayew in the voting to become just the second European-born player to win the continent’s greatest individual prize.

Aubameyang has finished in the top three of the voting on a further four occasions and has enhanced his reputation since moving to the Premier League with Arsenal in January 2018, scoring 56 goals in 93 league appearances for the north London side and winning a share of the 2018/19 Golden Boot.

Mahrez sparkled as the Foxes won the title despite being amongst the favourites for relegation, scoring 17 goals and providing 11 assists to also be named as the PFA Player’s Player of the Year.

After four seasons at the King Power Stadium he moved to Manchester City in a then club-record deal, helping the side to an unprecedented domestic treble during his debut campaign at the Etihad.

The 29-year-old has also continued to thrive on the international stage and was a key figure in the Algeria side who were crowned Africa Cup of Nations winners in 2019, scoring a stunning stoppage-time winner in their semi-final victory over Nigeria.

QUIZ: Can you name every PFA Player of the Year since 1992?

Africa’s Footballer of the Year award has headed to the Premier League in each of the past four years, with Mohamed Salah earning back-to-back honours in 2017 and 2018.

Salah’s first triumph came following a staggering debut season after signing for Liverpool, scoring 32 league goals – a record for a 38-game season – to win the Premier League’s Golden Boot alongside a PFA Player of the Year and FWA Footballer of the Year double.

The following season saw Salah retain his status as Africa’s finest footballer after winning a second successive Golden Boot and lifting the Champions League with Liverpool, his penalty opening the scoring in the Reds’ final victory over Tottenham.

Salah finished as runner-up to club teammate Sadio Mane for last year’s award, before helping Liverpool to a long-awaited Premier League title success, the Egyptian international remaining one of the division’s finest forwards and rapidly closing in on a century of league goals in English football.

Having finished as runner-up in each of the past two seasons, Mane was finally named as Africa’s Player of the Year in 2019, becoming only the second Senegalese player after El-Hadji Diouf to win the prestigious honour.

Mane’s recognition came after playing an influential role in Liverpool’s Champions League success, scoring 26 goals in all competitions and winning a share of the Premier League’s Golden Boot.

Last season saw the 28-year-old named as Premier League Player of the Season after a scintillating individual season ended in Liverpool’s coronation as champions of English football, Mane amongst the world’s very best players and likely to be in contention for a second successive award in 2020.