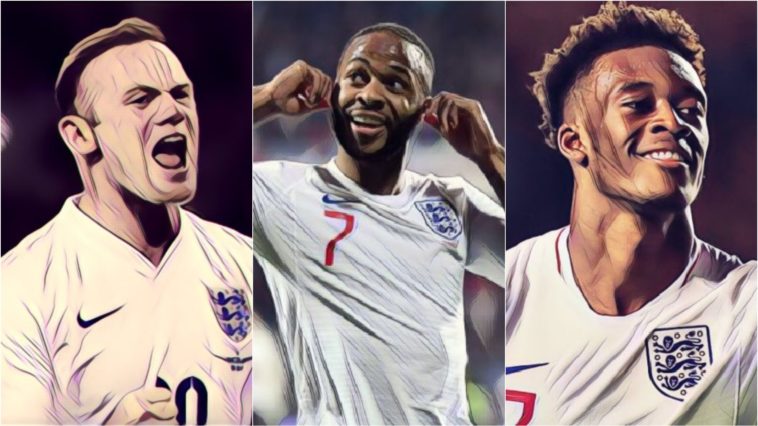 The youngest players to make their international bow for the England football team since 1992, the year the Premier League broke away from the EFL.

Despite a 2-0 defeat to Belgium, one still has to be impressed by the wealth of young talent coming through the ranks while the Three Lions continue to destroy most other opposition.

The average age of the starting line-up on Sunday was 26, with the eldest of the group being 30-year-old Kieran Trippier, so the team is more or less at peak age, but the bench was also packed with young talent.

Meanwhile, Jadon Sancho is still only 20-years-old, and the likes of Trent Alexander-Arnold (22) or Aaron Wan-Bissaka (22) weren’t even in the squad this week. Gareth Southgate pretty much has the next generation lined up and ready to go.

Southgate’s decision to blood in young players early is paying dividends already and could pay off at Euro 2020 and major tournaments down the line. Looking back at the list of players to have made their bow in their teens, there is a high success rate, justifying their selection in the first place.

The Chelsea winger only made his debut in March 2018 in a 5-0 home win against the Czech Republic, which he followed up with an assist in the 5-1 victory over Montenegro. At the time he had made 22 first team appearances for his club, scoring five goals.

A ruptured Achilles tendon towards the end of the season was a big blow to Hudson-Odoi, and meant he missed out on the Uefa Nations League semi-final against the Netherlands the summer before last. He has struggled to build on that early promise that saw him linked with a big money move to Bayern Munich since his recovery, but he did score this wonderful goal for the England U21’s following a thrilling solo run against Austria last year.

The second half of Michael Owen’s career didn’t provide much fodder to write home about, the striker was an absolute sensation when he first broke through at Liverpool. After scoring 15 goals in his first 33 senior appearances at club level, Glenn Hoddle saw fit to call him up for a demoralising 2-0 defeat to Chile in 1997.

Owen scored his first goal for the national team on his fourth cap, which turned out to be the winner in a friendly fixture with Morocco. The lighting quick youngster then announced himself to the world by scoring an iconic solo goal against Argentina at the 1998 World Cup in France. He went on to score 40 times in 89 appearances for his country, an excellent scoring record all told.

Manchester City‘s wily winger became just the fifth 17-year-old of all-time, and only the third in the Premier League era, to play for the England senior team.

Sterling’s debut was a rollercoaster of a game – the famous 4-2 friendly defeat in Sweden. The then-Liverpool player was a handful for the Swedes, winning the free-kick that led to England’s second goal, and Danny Welbeck scored a nice volley, but it was Zlatan Ibrahimovic who stole the show. The striker scored all four goals for the hosts, including an insane long-range bicycle kick.

At the time he had made 20 first team appearances for the Reds. It took him a while to establish himself as an England regular, but Sterling is now arguably the nation’s star player. He currently has 55 caps and has provided 12 goals and 20 assists for the team.

The most recent addition to this list following his debut against the Republic of Ireland in a home friendly this month, Jude Bellingham is the only player here not playing in England when first lining out for the national team.

That illustrates the shift in mentality of young English players these days; no longer satisfied with picking up their wages and infrequent League Cup appearances, they are heading abroad for opportunities, particularly in Germany.

It’s worked wonders for Jadon Sancho, who made his England debut at the age of 18, and Bellingham has followed in his footsteps by flourishing at Borussia Dortmund.

The central midfielder could have easily gone to somewhere like Manchester United, but he has reaped the benefits of getting experience in the Bundesliga and Champions League with a club whose reputation for developing prodigious talent proceeds them.

It’s easy to forget just how much excitement surrounded the emergence of Wayne Rooney as a 17-year-old. The young striker burst onto the scene at Everton with his stunning winner against Arsenal and looked to have all the makings of a world class player.

Whether or not the former Manchester United forward truly fulfilled that potential is up for debate, but his explosiveness at such a young age was a sight to behold. Sven Goran Eriksson gave him his national debut after just 26 first team appearances, in which he had scored five times.

It wasn’t until his sixth cap that the boy wonder broke his duck, but once he got off the mark he didn’t stop. He made a huge impression at Euro 2004, scoring four goals in four games. That tournament was probably the peak of his international career, but he went on to find the net 53 times for England, making him the all-time record goalscorer, pipping Bobby Charlton to top spot.

The youngest of the lot, but the one with the least distinguished international career (discounting Hudson-Odoi’s fledgling career, of course).

Theo Walcott was hailed as the new Thierry Henry when he broke through, especially after Arsene Wenger chose to buy him Southampton for just £5 million. Sven gave him his England debut after 23 first team appearances and took him to the 2006 World Cup, but he didn’t play a single minute in Germany.

He failed to measure up to expectations over the course of his career, his inability to evolve hampering his progress. He did, though, have his moments in a white shirt, the highlight being his hat-trick against Croatia in the 2010 World Cup qualifiers.

Walcott didn’t make the final squad for that tournament, however, and he would only feature at one major competition for England in his career, Euro 2012. He ended up with 47 caps, the last of which came in a friendly draw with Spain in 2016.

See Also: The tabloids are still up to their old tricks – but footballers are fighting back like never before