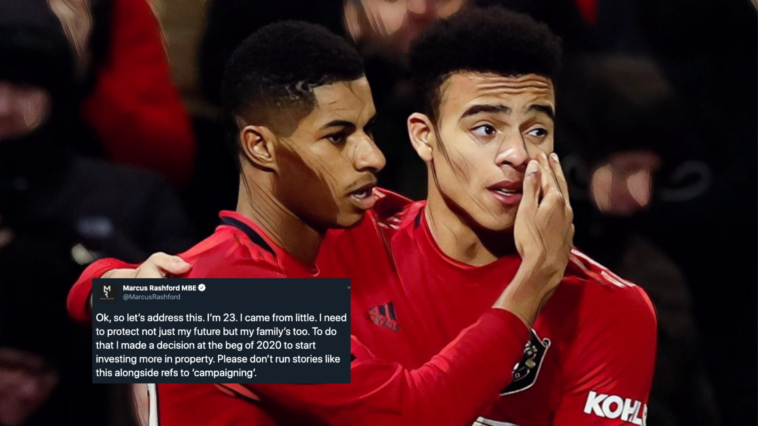 Yet again here was a black footballer who dared to spend their money how they saw fit, another example of the tabloid media fanning the flames of animus towards successful young men of colour.

The headline and story in itself is not over inflammatory – footballer buys property, big woop. We all know the reaction, though. “If he can buy five mansions why can’t he feed the kids himself?” And once a seed is planted, it grows.

These publications know what they are doing, just as the Daily Mirror did when they ran a story on Premier League starlet Mason Greenwood at the weekend. “Man Utd fear Mason Greenwood could throw away career like Ravel Morrison,” they informed us.

There was seemingly no basis for this story. No insider knowledge, no named source from within the club providing them with evidence of such a claim, no nothing. The entire point is to merely stir the pot, ensuring there is a constant level of animosity bubbly away.

Stories such as this have plagued the Manchester United striker ever since he was caught with a woman at the hotel the England team were staying in while in Iceland. Not the smartest move during a pandemic, but he’s a teenager who made a mistake and has paid the price by not being called up to the national team since.

Meanwhile, Phil Foden, who was caught in the same act in Iceland, has received nowhere near the same scrutiny. The blinkered focus has been firmly on Greenwood, despite both men being guilty of the same indiscretion – I wonder why.

The moment the wrong type of footballer bought an expensive house. pic.twitter.com/fe35iyOaLq

The comparative difference in the reporting of white and black footballers’ lives is not a recent development and it’s been well documented at this stage. While not explicitly racist, it is implicitly so, carried out with an insidious and nasty purpose.

Sometimes it’s not even a conscious bias. One BAME (Black Asian Ethnic Minority) reporter for the Daily Mail has admitted to writing about black and white players differently without realising. But as Manchester City winger Raheem Sterling said two years ago, such coverage “emboldens racist rhetoric”.

It is nothing new, but the backlash to it, or at least how it is reacted to, certainly is. Social media gives elite sportsmen and women a massive platform, one with a greater combined reach than the newspapers themselves.

Rashford, who has 3.9 million Twitter followers compared to the Daily Mail’s 2.5 million, responded to the paper’s claims the following afternoon, something he shouldn’t even be required to do.

The England forward explained why he had bought the homes, and pointed out the problem with linking it to his campaigning in the same headline.

Ok, so let’s address this. I’m 23. I came from little. I need to protect not just my future but my family’s too. To do that I made a decision at the beg of 2020 to start investing more in property. Please don’t run stories like this alongside refs to ‘campaigning’. pic.twitter.com/coqla2i19d

In the past footballers would usually refrain from responding to such stories, to avoid the hassle of getting into a public spat with a publication that had the power to make one’s life a misery. Just ask John Fashanu, Graham Taylor and a myriad of other high profile victims of the red tops over the years.

Things are changing, however. With the capacity to reach tens of millions with just one tweet, Instagram update, or Facebook status, they are standing up for themselves.

Whether it’s Rashford setting the record straight, Sterling pointing out the hypocrisy of how similar stories are reported differently depending on the player’s skin colour, or Paul Pogba calling out the outright lies of The S*n, they are uncowed in tackling the narrative.

The heartening thing is, they’re not doing it alone anymore. Their fellow professionals, across all racial lines, are publicly backing them up and pushing back against this onslaught. Such solidarity is needed now more than ever.

Disheartening story about @MarcusRashford today. Should celebrate the campaigning for those from a background like his without criticising making sound investments – like footballers from ALL backgrounds. Not views I've found at Daily Mail Sport & I'll use my platform to confront

Here they go. This is how they start. Subtle to begin with, but it will grow. It’s what they do. https://t.co/iIYpWG47Wx

Who actually writes this shite? And how does it get published? 😑 https://t.co/WUQeO4H3wC

Can you name the Manchester United officials you spoke to for this story please?! https://t.co/uQBXdT7FWS

Again, it’s deplorable that they even have to do so, but it’s also vitally important that they do. The framing of these stories influences readers and has a real world effect. Kick It Out reported earlier this year that there was a 42 percent increase in all forms of discrimination in the professional game during the 2019/20 season, and a 53 percent increase in racial discrimination.

Tabloids will, naturally enough, defend themselves by saying they can’t be held responsible for the actions of people who may or may not read their material. And it’s true that a degree of personal responsibility should be taken by the bigots guilty of such discrimination. But it’s also true that racial stereotyping fuels racism.

Footballers are well used to the publicity and limelight their profession brings. They are more aware than anyone that being a successful athlete means trading in your private life for the rest of your career. But that doesn’t mean they don’t also deserve dignity and respect by our colleagues in the media.