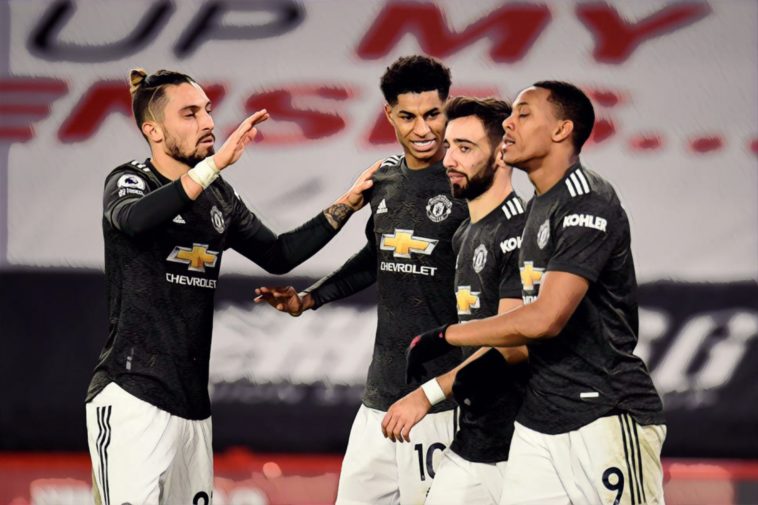 Nobody thought the Premier League could possibly get weirder than last season, but the 2020/21 campaign is giving it a run for its money and Manchester United might be the weirdest aspect of it. At times they play as if they don’t know where the goal is, and yet somehow they continue to break records and will find themselves just two points off top spot if they win their game in hand.

The Red Devils’ away form continues to confound, particularly since they have the fourth-worst home record in the league.

⚽⚽⚽ – @ManUtd are the first team in English top flight history to net at least three goals in six consecutive away matches. #SHUMUN #MUFC

United are the fourth side in English top-flight history to record 10 consecutive away league wins, after Spurs (10 in 1960), Chelsea (11 in 2008) and Manchester City (11 in 2017), and are only the third team in Premier League history to win their opening six away games of a season. Oddly, they’ve gone behind in each of those matches.

They have now scored at least twice in 10 consecutive away league games – the longest such run by a team in the top flight since Spurs in October 1960 (also 10).

Five of the biggest feuds between teammates in football

Football is, at its heart, a stupid, cruel game that often fails to reward the ‘better’ or more ‘deserving’ team, however you want to measure those unquantifiables.

Liverpool and Tottenham Hotspur both played to their strengths, employing their usual gameplans in an entertaining contest, but it was the latter who created the better chances, winning the expected goals stakes by 1.54 to 1.02 xG. And yet the Reds won 2-1 with one of their goals taking an extremely fortunate deflection.

The hosts were clearly the better team overall, otherwise why would Spurs employ such tactics, yet the visitors will be feeling aggrieved at the result. If Harry Kane had not so uncharacteristically fluffed a golden opportunity then perhaps they would be in the driving seat for the Premier League title rather than the reigning champions.

Or maybe if two of their best chances hadn’t fallen to Steven Bergwijn and instead to, say, one of the most ridiculously clinical finishers in the game, then it would also have been a different story.

Since the start of his second season in England Son has scored 60 Premier League goals. His xG in that period is 37.39.

After netting the equaliser in the first-half, Son Heung-min has now scored 11 goals from 23 shots, meaning he’s converted 47% of his attempts this season.

Arsenal stemmed the bleeding with a draw against Southampton on Wednesday, although it means they now have won just once in their last nine Premier League games, drawing twice and losing six times.

The Gunners have earned just 14 points from 13 league games this season, their lowest tally at this stage of a top-flight campaign since 1974-75 (9 points when adjusted for three points for a win).

One worrying aspect of the north London outfit’s campaign has been ill discipline, as they top the league for red cards (3) alongside Brighton. Since Mikel Arteta’s first game in charge on 26 December 2019, the team has received seven red cards, four more than any other side in that time.

Gabriel is the 55th different player to be sent off for Arsenal in the Premier League.

Leeds United finally managed to convert their very many chances into goals and in spectacular fashion too, smashing Newcastle United 5-2 on Wednesday. It’s the first time the Whites have netted five times in a Premier League match since May 2001, when they beat Bradford City 6-1.

Leeds were undone from set plays in the 2-1 defeat to West Ham last week and it could have been the same story here, but from that point on they overwhelmed a Magpies team ill equipped to deal with their ferocious counter-attacking.

14 shots for #lufc in that first half is the most of any game so far this season.

Failing to beat a promoted team for the first time since 2018, Manchester City could only manage a draw against West Brom despite having 77% possession and 26 shots to the visitor’s five. It was the most they have had in a home league game without winning since August 2019 against Spurs (30).

The Baggies picked up their first away point against City since August 2005, ending a run of nine straight league defeats at Eastlands.

Man City's attacking numbers in the first 12 games per season under Pep:

20/21's numbers a shadow of what we have witnessed from Pep teams in the past. Worrying

And now for one of the more unusual statistics we will encounter this season, Fulham’s 0-0 with Brighton meant that Craven Cottage was host to a goalless draw for almost a decade.

After 3413 days and 196 games – Fulham's record of not having a 0-0 draw at Craven Cottage in a league game has finally come to an end. pic.twitter.com/CCUWeSIWqf

See Also: Why Kane and Son are a striking partnership for the ages