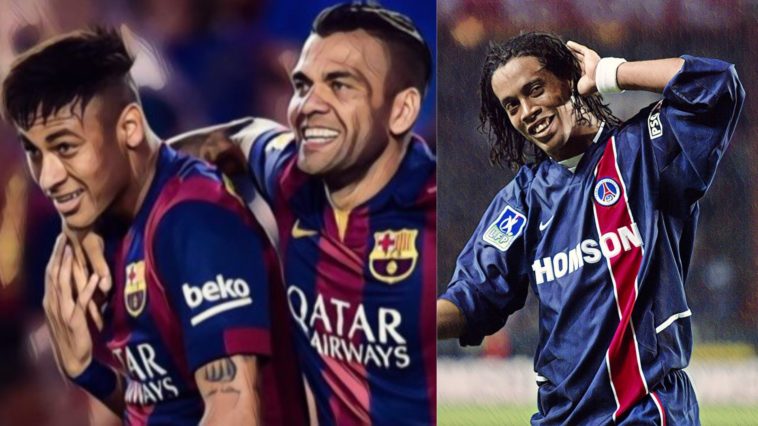 Football fans across the world are currently getting used to the images of Lionel Messi in the colours of Paris Saint-Germain, the six-time Ballon d’Or winner having made a shock departure from Barcelona this summer.

Barcelona’s crippling financial situation has led to the exit of the club’s greatest ever player this summer, with PSG moving quickly to secure arguably the greatest free transfer signing of all time.

Messi’s move to Paris also sees him join a stellar list of names to have adorned the red and blue of both clubs, here are five of the best players to play for Barcelona and PSG.

The best players to play for both Barcelona and PSG:

Neymar is believed to have played an influential role in Messi’s decision to sign for PSG, the two having worked brilliantly together in tandem during a memorable period in the colours of Barcelona.

The top scoring Brazilian in Champions League history, Neymar emerged as one of the most exciting young talents in world football at Santos before signing for Barcelona, where he formed part of arguably the most formidable forward line of the modern era.

Combining to devastating effect with Messi and Luis Suarez, the South American superstars fired the Catalans to a historic treble-winning season in 2014/15, Neymar netting 39 goals in all competitions as part of 105 he would score across a four-year spell in Spain.

The Brazil international left Barcelona in record-breaking move to Paris, as PSG obliterated the world transfer record to sign Neymar in a stunning £198m deal.

The move was designed to take the star out of the shadow of Messi and see him emerge as the world’s best, but despite several moments of magic, injuries have largely prevented him hitting the heights once expected.

He has, however, won three league titles and scored 87 goals in just 116 appearances for PSG, whilst the arrival of Messi this summer makes the Parisians strong contenders to win an elusive Champions League title this season.

Ronaldinho became a household name after signing for Paris Saint-Germain in the early 2000s, the brilliant Brazilian starring during a two-year spell with the Parisians and forming part of Brazil’s World Cup-winning squad in 2002.

The following summer saw a clamour for his signature and it was Barcelona who won the race, beating off competition from Manchester United to secure a transfer that helped to change the course of the club’s history.

Ronaldinho became the driving force behind the Catalan’s rise back to the summit of the European game, arriving at a Barcelona side without a major trophy in four seasons and inspiring the club to back-to-back league titles and the Champions League.

At his best he was unquestionably the world’s finest footballer and won the Ballon d’Or in 2005, Ronaldinho playing his football in a joyous and expressive style that has ensured he will live long in the memory of fans who witnessed his greatness at its brief but brilliant peak.

Ronaldinho – 10 of the best quotes about the magical Brazilian

The career pathway of Zlatan Ibrahimovic reads like a who’s who of Europe’s biggest clubs. The Swedish superstar has enjoyed successful stints at sides such as Ajax, Juventus, Manchester United and played on both sides of the Milan divide.

Ibrahimovic also enjoyed spells at both Barcelona and PSG, the former a rare disappointment on a glittering career and the latter a history-making period as the spearhead of an emerging Parisian outfit.

Ibrahimovic signed for Barcelona in a mega-money move in 2009 after scoring 57 goals in 88 league appearances for Inter Milan, though the forward’s extroverted personality and individualism saw him clash with Pep Guardiola at the Camp Nou.

Despite scoring 22 goals in all competitions and winning the league title he returned to Italy after just one season, signing for AC Milan and inspiring the Rossoneri to Serie A title success before a move to PSG.

PSG were emerging as a force following a billionaire takeover and the signing of Ibrahimovic helped spark an era of domestic dominance, the marquee arrival winning four consecutive league titles and scoring 156 goals in just 180 appearances.

He departed for Manchester United in 2016 as the greatest goalscorer in PSG’s history.

Rating Zlatan Ibrahimovic’s impact at each of his nine clubs

Somewhat of an unsung hero throughout much of a career that included spells at both Barcelona and Paris Saint-Germain, Motta was a midfield anchorman who enjoyed a trophy-laden career at the very highest level.

Motta won two league titles and the Champions League during his time with the Spanish side but watched on from the substitutes’ bench as they were crowned European champions in 2006, never truly establishing himself as a fixture in the club’s midfield amid a succession of injuries.

He moved on to Atletico Madrid where a serious knee injury threatened his career, only to enjoy a renaissance at Genoa before playing a selfless role in Inter Milan’s 2009/10 treble-winning side as the club’s midfield metronome.

Motta finished his career with a seven-year spell at PSG and won five league titles during that time, offering a calming presence at the base of the midfield that was most often felt whenever he was absent from the side.

Dani Alves stands as the most decorated player in football history. He is a footballer who – alongside many of his compatriots before him – helped revolutionise the role of a full-back in an unforgettable career of success.

Alves starred at Sevilla before being signed by divisional rivals Barcelona and formed part of the greatest sides in the club’s history, winning a wealth of major silverware during an eight-year spell at the Camp Nou, including six La Liga titles and three Champions League triumphs.

The Brazilian formed a brilliant partnership with Lionel Messi and proved a hugely influential figure from right-back, bursting forward to become one of Barcelona’s most creative attacking options.

Alves made 391 appearances in all competitions for Barcelona and scored 21 goals, moving on to Juventus and later PSG – winning two league titles amongst six honours collected during a two season spell in the French capital.

Read – The poacher of Paris: Cavani’s 200 goals for PSG