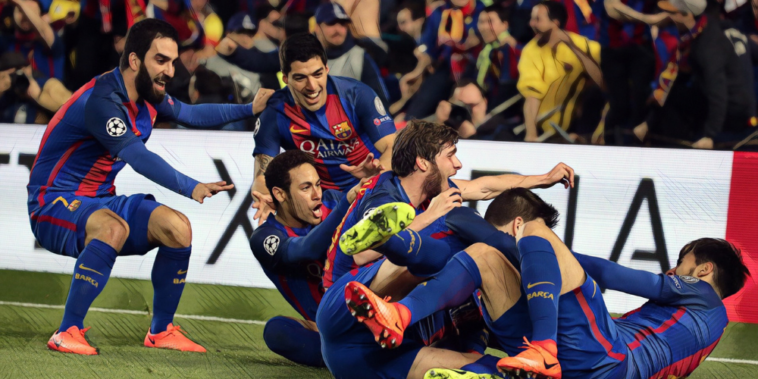 Every so often we witness a footballing occasion that rips up the script of what was previously perceived as possible. Barcelona’s captivating comeback against Paris Saint-Germain was one such fixture, the Catalans staging a stunning fightback in an unforgettable Champions League contest.

Barcelona had been European football’s dominant force over the previous decade, winning three Champions League trophies in the past eight seasons before being drawn to face PSG in the last 16 of the 2016/17 campaign.

Their most recent success, as part of a treble-winning season in 2015, had been inspired by an all-South American forward line of Lionel Messi, Luis Suarez and Neymar, three of the most gifted individuals in the game and a devastating combination when working in synchronisation.

The first leg with PSG saw Barcelona staring down the barrel of an early exit, however, a 4-0 defeat at the Parc des Princes leaving the Spanish side in danger of failing to reach the Champions League quarter-finals for the first time in a decade.

Angel Di Maria scored twice in a dominant display from the Parisians, a side who had spent big in previous seasons in a bid to compete with Europe’s elite sides. Their convincing win appeared a changing of the guard at the top end of European football.

And so the stage was set as the two teams renewed rivalries three week’s later, the Catalan crowd arriving at the Camp Nou with modest hope and little expectation.

The recipe for any comeback requires a little luck and a strong start, one the home side received after taking an early lead in the return.

Barcelona began in dream fashion as Suarez headed home inside three minutes, beating Kevin Trapp to the ball to reduce the deficit.

Within an hour it was 3-0 to the home side and the Camp Nou was rocking with rapturous optimism. Layvin Kurzawa’s miscue resulted in an own goal to double Barcelona’s lead before the break, before a Lionel Messi penalty – won by the irrepressible Neymar’s burst into the box – left the Spaniards within one goal of levelling the tie.

The comeback appeared on, though Edinson Cavani’s effort against the post provided a warning sign that PSG remained a threat. Less than ten minutes later, the Uruguayan was celebrating a goal that represented a dagger to the hearts of Catalan hope.

Kurzawa beat Ivan Rakitic in the air to nod down inside the area, with Cavani making no mistake as he lashed home high into the goal to score a crucial away goal for the Parisians.

Moving almost back to square one, Barcelona now needed three goals to progress.

There was a sense of deflation around Luis Enrique’s side, with Marc-André ter Stegen’s intervention required to prevent Cavani from netting a second for the visitors.

Javier Mascherano soon made a last-ditch tackle to stop Angel Di Maria in his tracks, a late lunge in the box that the defender later confessed could quite easily have been penalised.

Down and appearing out, the clock ticked rapidly towards full-time and a European exit.

Fortunately for Barcelona, among their ranks was a collection of footballers capable of changing games in an instant. Fine footballers produce match-winning moments, but the very elite are capable of turning the tide when all appears lost.

As his teammates struggled around him, it was Neymar who showed the mental fortitude and thrilling talent to stage the unthinkable in an unforgettable seven-minute spell.

Hailed as Brazil’s brightest talent from his teens, the move to Barcelona from Santos had seen Neymar establish himself as one of the world’s best, forming an exhilarating unison with Suarez and Messi.

His role in La Remontada – the Spanish word for comeback – confirmed his status as a superstar, grabbing the game by the scruff of its neck and dragging a defeated Barcelona into the quarter-finals.

There was 87 minutes played when Neymar led a siege towards the Parisian goal, bending home a brilliant free-kick – one he had won himself – into the top corner to spark a flicker of belief from Barcelona.

Three minutes later and Barcelona had a lifeline as Suarez was bundled over inside the PSG box. Even given the presence of Messi on the pitch, it was Neymar who took responsibility and he confidently sent Trapp the wrong way from the spot.

Grabbing the ball from the goal, the Brazilian beckoned the crowd on for one last push.

Barcelona had a chance, a glimmer of hope, needing just one more goal in the final seconds to complete the most thrilling comeback in Champions League history.

Nerves coursed through the PSG players, but the clock was against Barcelona.

In the midst of a feverish atmosphere as hope and disbelief met, it was Neymar who kept his cool. This time the creator, in sublime fashion, as Barcelona scored a sensational sixth.

As the majority of players – including goalkeeper Ter Stegen – packed inside the PSG penalty area it was the Brazilian who floated a free-kick into a congested mix of bodies. Headed back towards the taker, he re-received possession, with a composed feint fooling Marco Verratti.

The feint not only saw him coast past Verratti, but created confusion among a PSG defence desperately trying to hold their defensive line amid the chaos inside the area.

Coming inside onto his weaker left side, he delivered a ball of pinpoint precision, perfectly placed between the PSG defence and into an area Trapp knew he couldn’t come.

Deep into stoppage time it found the unmarked Sergi Roberto, who steered in to spark utter pandemonium inside one of football’s great colosseums as Catalan cheers erupted into the Spanish skies.

Never before had a team achieved such a comeback in 62 years of the European Cup and Champions League and whilst Roberto’s match-winner saw him steal the headlines, this was Neymar’s night.

The forward had come to the fore at his side’s most desperate time of need, with that final seven-minute salvo turning the tie in implausible fashion.

Luis Enrique had set the tone with his pre-match press conference, outlining his belief that Barcelona were capable of the impossible.

“In 95 minutes, an infinite amount of things can happen,” he continued. “I am convinced that at some point we will be close to qualifying. And when you are close, our confidence will soar, and theirs could start to diminish.”

Enrique’s comments were unerringly accurate, as a combination of PSG’s psychological collapse and Barcelona’s belief set the stage for one of the great nights in Champions League history.

At the centre of it all was Neymar, a defining performance on the biggest stage, the catalyst for a Catalan comeback that will never be forgotten.