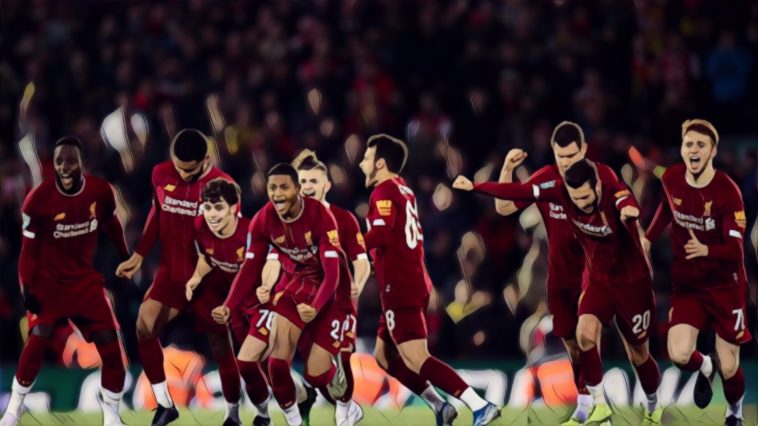 Last week we were treated to an absolute goal fest between Liverpool and Arsenal in the Carabao Cup, a contest that saw a goal in the first two minutes, one in the last two minutes, and eight more in between.

It might just have been the most fun game we see all season, albeit one without a tremendous amount of quality on show. This was, after all, two teams sending out essentially reserve lineups and the stakes weren’t terribly high, so caution was thrown to the wind.

The result is akin to watching two loutish drunks fighting over a girl, neither of whom have a chance with, outside Burger King on a night out. It’s entertaining and you don’t want to take your eyes off it, but you’re fully aware you’re not exactly witnessing the Thrilla in Manilla.

Which got us thinking, what games in this recent history of this competition fits that exact description. A good few, pleasingly.

Five of the best League Cup goal fests ever:

From now on whenever Liverpool and Arsenal face each other in the League Cup, it should be known as the Julio Baptista Derby after the two sides met in this competition in 2007. That particular meeting saw nine goals scored, with the Gunners running out 6-3 winners as the Brazilian forward scored four on the night.

Jeremie Aliadiere opened the scoring after a beautiful long ball right down Liverpool’s throat, although Robbie Fowler, on his comeback tour, equalised just six minutes later. That preceded an absolutely mental end to the first-half though, in which Baptista bamboozled Jerzy Dudek with a free-kick. Alex Song then scored from a corner, before Baptista capped off a nice move to make it 4-1 going into the interval.

The Polish goalkeeper saved a penalty after the break, but Baptista got his hat-trick shortly after, and the Reds were unbelievably losing 5-1 at home. They started to put some respect on the scoreboard though, as Steven Gerrard scored a cracking volley in the 68th minute.

Sami Hyypia’s glancing header reduced the deficit to two with ten minutes left, but their humiliation was made complete just moments later when Baptista scored his fourth and Arsenal’s sixth of the game. It was an embarrassing night for the home side, who fielded regular starters such as Gerrard, Dudek, Hyypia, Luis Garcia and Craig Bellamy, although they did go on to reach the Champions League final that year.

Five of the best Liverpool vs Arsenal games ever

This was another wild October game that swayed between the two sides, but wouldn’t happen under the same circumstances now as extra-time has been gratefully eliminated from the competition.

Manchester United took the lead early on, Ryan Giggs capitalising on sloppy play from Chelsea to score in the 22nd minute. The scoreline proceeded to see the visitors take the lead before the hosts would equalise over and again right up until full-time.

A David Luiz penalty was followed by a Javier Hernandez strike, which was cancelled out in the second-half by Gary Cahill. On the hour mark Nani scored United’s third with a delicious chip that appeared to be the winner as they held out for the rest of normal time without conceding. That was, until Eden Hazard popped up with a 94th minute equaliser.

The Blues really took advantage of the momentum from that point, Daniel Sturridge capitalising on a woefully misjudged header from Scott Wootton to take the lead for the first time in the game. Ramires rounded Anders Lindegaard late on to complete the comeback, before a 120th minute Ryan Giggs penalty finished out an end-to-end battle.

2012 was obviously the year for mental League Cup fixtures, and this might be the most preposterous in the history of the tournament.

Incredibly, Reading took a 4-0 nil lead after just 35 minutes and were looking odds-on to complete a huge cup upset. Goals from Theo Walcott, Laurent Koscielny, and Olivier Giroud got Arsenal right back in the fold, but it looked as if the Royals would hold on.

That was until Walcott popped up to sensationally score an equaliser in the 96th minute. 4-4 and the game is going to extra-time. From here, Marouane Chamakh turns out to be the hero. He gives the Gunners the lead for the first time in the 103rd minute, but Pavel Pogrebnyak equalises.

There’s barely time to breathe when Walcott gets his third of the night in the 121st minute. And just when you think that’s about as late as you can score in a tie, Chamakh scores again just a couple of minutes later. Outrageous stuff, but stunning.

A resilient Nottingham Forest hosted Newcastle United in 2011, recovering from one goal down on three occasions, but ultimately the Premier League outfit came out on top.

The Magpies took the lead through a Peter Lovenkrands headers from a Steven Marveaux cross, two names that have been long consigned to the dustbin of English football history. Lovenkrands scored again with a free-kick, before future Premier League winner Danny Simpson scored from a flukey effort.

Robbie Findley, Robbie Findley and Marcus Tudgay scored the equalisers on the night, forcing Newcastle into extra-time at the City Ground. The contest was heading to penalties until Fabricio Coloccini headed in from a Gabriel Obertan cross to send the Toon into the fourth round.

A seldom discussed encounter, but arguably the wildest and most entertaining League Cup semi-final ever, or at the very least in recent memory.

Aston Villa held a 1-0 lead going into the second leg, which they would play at home, against Blackburn Rovers, meaning the visitors had to go all out if they wanted to reach the final. Despite being managed by Sam Allardyce, Rovers looked electric in attack in the early goings, scoring twice via Nikola Kalinic.

Left-back Stephen Warnock was the unlikely source of Villa’s first goal in the game, getting on the receiving end of a dangerous Ashley Young cross. Milner scored an equaliser after they were awarded a penalty and Chris Samba was then red carded after going through the back of Gabriel Agbonlahor.

Momentum had completely swung direction by the time the second-half got underway, Richard Dunne forcing the ball in off Steven N’Zonzi before a deflected Milner striker from outside the box flew in. Then the ultimate indignity, as Emile Heskey rounded goalkeeper Paul Robinson for the host’s fifth.

Blackburn didn’t recoil however, with Martin Olsson’s scissor volley arguably the goal of the night. That was followed up by Brett Emerton’s volley from outside the box, but it was the Villains who had the final say in added time. Young picked up the ball in his own half before embarking on a long run and slotting the ball in the far corner, rubber stamping their trip to Wembley.

Villa reached their first final in a decade, leading to a massive pitch invasion. They lost the decider to Man United, but they will always have the memory of that mad, wonderful night.