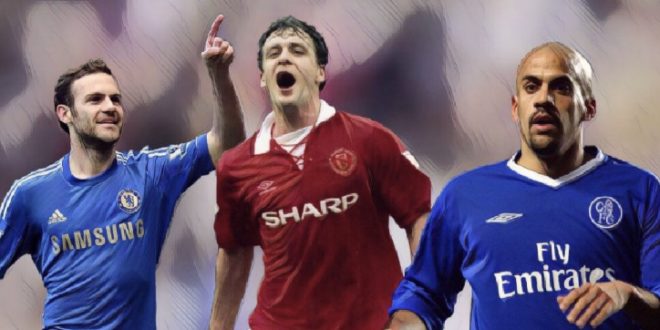 Harry Diamond 11/08/2019 Five of the Best, Opinion/Features Leave a comment

The two most successful teams of the Premier League-era kick-off the new campaign with a meeting at Old Trafford, with Manchester United facing Chelsea in what is sure to be a fiercely-contested clash.

The two clubs have won 18 titles between them since the inception of the Premier League in 1992, whilst a host of players have featured for both sides during that time.

Ahead of the meeting between the sides on Sunday, we take a look at five of the best stars to feature for both sides in the Premier League-era…

Hughes enjoyed two successful spells at Manchester United, returning to Old Trafford for a second time in 1988 after spells at Barcelona and Bayern Munich.

The Welsh forward helped establish United as the dominant force in the early years of the Premier League, scoring 27 goals over the first two seasons of the new league as United won back-to-back titles.

Hughes would join Chelsea in 1995, playing a key role in the club’s pre-Roman Abramovich success, being named the club’s Player of the Year in 1997.

Signed by Manchester United in a British transfer-record deal from Lazio in 2001, the Argentine midfielder failed to live up to expectations in English football but did win a Premier League title during his second season at Old Trafford.

Much was expected of the playmaker after he had inspired Lazio to the Serie A title in 2000, however, he failed to adapt to the demands of the Premier League and his better performances came in Europe.

Veron made 51 Premier League appearances for United, scoring seven goals, before joining recently-rich Chelsea in a £15m deal in 2003.

A debut goal at Anfield sparked hopes he could rediscover his best form at Stamford Bridge, but after just six further appearances he moved back to Italy with Inter Milan.

A popular figure at both clubs, many were surprised when Chelsea sold the Spaniard to United in a £37m deal in 2014.

Having arrived from Valencia two-and-a-half years earlier, Mata played a key role in Chelsea’s Champions League, FA Cup and Europa League triumphs and was named as the club’s Player of the Year for two successive seasons.

Having endured a disappointing start to his Manchester United tenure, Moyes signed Mata from Chelsea and instantly placed the playmaker in his team.

At Old Trafford, Mata has been a reliable performer and added a second FA Cup and Europa League to his collection, as well as a League Cup in 2017.

A fine technical player, the 31-year-old remains a part of Ole Gunnar Solskjaer’s plans ahead of the new season.

Having failed to initially make a breakthrough at Chelsea, Matic was sold to Benfica before returning to Stamford Bridge in a £21m deal three years later.

Having developed as a player in Portugal, Matic established himself as key component in two title-winning sides at Chelsea, with his powerful frame and tactical intelligence providing a defensive screen in midfield.

Manchester United, looking to add physicality and solidity to their midfield, signed the Serbian in 2017 and he initially impressed at Old Trafford.

Now 31, he remains a United player despite many feeling his best days are perhaps behind him.

One of several prospects taken to Stamford Bridge as part of the club’s policy of stockpiling young talent, Lukaku struggled to make an impact at Chelsea and failed to score in his 10 league appearances for the club.

Prolific loan spells at West Brom and Everton persuaded the latter to sign him permanently, and after plundering 53 goals in 110 Premier League appearances on Merseyside the Belgian moved to Old Trafford in a £75m deal.

Lukaku would spend two seasons in Manchester, scoring 42 goals in 96 appearances for United before moving to Inter Milan in a £73m on deadline day of the 2019 summer transfer window.