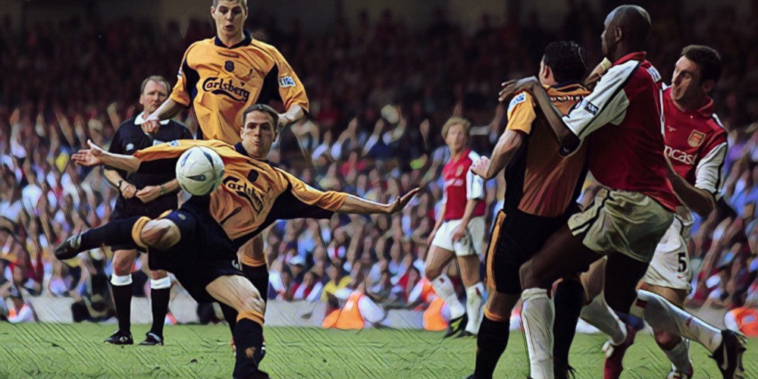 Arsenal and Liverpool are two of English football’s greatest clubs and have played out some truly epic encounters over the years.

As the two teams prepare to meet in the Carabao Cup semi-finals this evening, we thought it would be the perfect time to reminisce about five of the best Liverpool v Arsenal games of all time.

A match sometimes referred to as the game of the century, or the greatest finish to a title race in English football history.

Liverpool were the league leaders as second-place Arsenal visited Anfield in the final fixture of the campaign, the North Londoners needing to win by two clear goals to overhaul the Reds and snatch the title.

Alan Smith gave Arsenal a 1-0 lead at the start of the second-half, but as the game entered the final few minutes it looked as though George Graham and his side would be unable to end the Gunners’ 18-year wait for a top-flight crown.

In the most dramatic of fashion, Michael Thomas burst onto a ball over the top to dink a finish over Bruce Grobbelaar in stoppage-time, with Arsenal crowned champions following an unforgettable clash on Merseyside.

Sometimes due to the ridiculous amount of stupid things he says in his role as a pundit, it’s easy to forget just how good a player Michael Owen actually was.

Owen’s brilliance proved the difference as the two teams met in the 2001 FA Cup final in Cardiff. Arsenal battered Liverpool for the majority of the contest, though a combination of wasteful finishing and misfortune meant Freddie Ljungberg’s goal gave the Gunners just a marginal lead heading into the final stages.

With seven minutes remaining Owen levelled the scores with a close-range equaliser, before capping Liverpool’s comeback with a stunning second.

He darted past Tony Adams and nestled an inch-perfect left-footed finish into the bottom corner, sealing FA Cup success for Liverpool in a game that will forever be remembered as the Michael Owen Cup final.

Arsenal were headed towards the Premier League title during the 2003/04 season, though saw their proud unbeaten record come under threat as Liverpool visited Highbury in April.

The Gunners trailed at half-time as goals from Sami Hyypia and Michael Owen sandwiched a Thierry Henry effort for the hosts, before a second-half fightback continued the ‘Invincibles’ march towards immortality.

Henry’s brilliance decided the outcome of the game with the Frenchman – arguably the greatest forward in Premier League history – scoring a stunning hat-trick.

His third and Arsenal’s fourth was the pick of the bunch, a scintillating run through a succession of challenges before firing home.

OTD in 2004, Thierry Henry netted this hat-trick to help Arsenal to a 4-2 win over Liverpool

Receiving the ball from Gilberto Silva’s flick near the halfway line, Henry set off on an unstoppable run, driving past Didi Hamann and sending Jamie Carragher for a hotdog before rolling home a trademark finish into the bottom corner.

As has so often been the case in great games between these sides, their 2009 meeting proved an utterly bonkers game of football, one which left title-chasing Liverpool broken-hearted.

Liverpool were in the midst of a title race with Manchester United and went into their clash with Arsenal knowing that anything but a win would hand the Red Devils the advantage.

What followed was a phenomenal performance from Arsenal’s winter window signing, as Andrey Arshavin ran riot at Anfield to kill Scouse dreams.

The Russian produced a sensational display to score four goals in a pulsating 4-4 draw, a result which dented Liverpool’s title hopes as Rafael Benitez’s side finished four points behind United.

A truly chaotic Carabao Cup contest as the two teams shared a staggering 10 goals, with penalties left to separate the sides as Liverpool progressed from an unforgettable cup clash.

Liverpool had led just once in normal time, taking an early advantage as Shkodran Mustafi diverted the ball into his own net. From there Arsenal roared back to take a 3-1 lead on Merseyside, first Lucas Torreira firing in an equaliser before a Gabriel Martinelli brace seemingly put the Gunners in control.

Down but not out, Liverpool hit back again with Alex Oxlade-Chamberlain’s stunning strike against his former side making it 4-3, before Divock Origi levelled the scores with a smart turn and finish inside the area.

Joe Willock thought he had won it for Arsenal after firing home a superb long-range effort, but Origi – so often a man for big moments in his Liverpool career – forced extra-time with an acrobatic effort in the 94th-minute.

Penalties was perhaps the most fitting way to settle the pulsating end-to-end drama, with Caoimhin Kelleher’s save from Dani Ceballos booking Liverpool’s place in the next round.