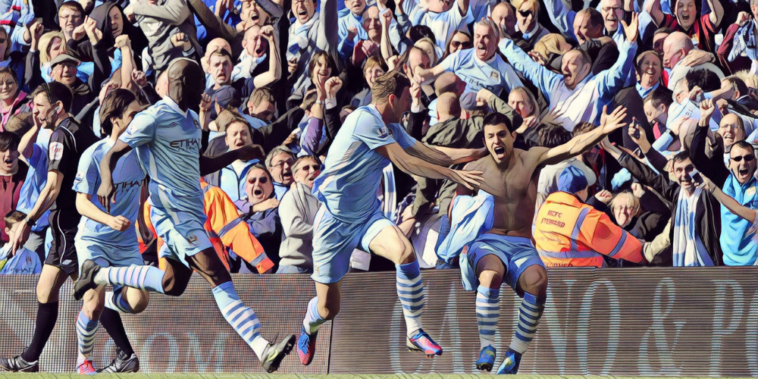 There’s nothing that beats the drama of a last-minute winner and throughout the years we’ve seen some thrilling conclusions to Premier League games.

With the result hanging in the balance and the clock rapidly turning towards the 90th minute and beyond, last-minute winners provide players with a chance to become heroes and secure all three points for their side.

We’ve decided to look back at some of the best late, late interventions in the division’s history, here are some of our favourite last-minute Premier League winners.

The decisive goal in a game many regard as the greatest in Premier League history, Stan Collymore rifled home a last-minute winner to decide an epic under the Anfield lights.

Liverpool and Newcastle met on Merseyside in the midst of the 1995/96 title race, with the two teams playing out a classic end-to-end encounter that had the most dramatic of conclusions.

Newcastle had raced into a 12-point advantage at the top of the Premier League, but one win in five had allowed Manchester United back into the race ahead of the Magpies’ trip to Liverpool – the Reds sitting slightly further back with faint title hopes of their own.

Robbie Fowler opened the scoring after just two minutes against a Newcastle side lacking confidence, though quick-fire goals from Les Ferdinand and David Ginola turned the game around inside 14 minutes.

Fowler’s second goal levelled the scores once more, but Faustino Asprilla prodded past David James to put Newcastle back ahead.

It was left to Collymore to rescue the Reds however, first turning home Jason McAteer’s cross, before finding space in the 92nd-minute to lash home a winner and leave an exasperated Kevin Keegan slumped over the advertising hoardings.

Questions were asked when Liverpool secured the signing of veteran midfielder Gary McAllister on a free transfer from Coventry in 2000, the 35-year-old Bosman addition deemed a strange signing for a side with aspirations of winning silverware.

It took just one season for McAllister to cement himself as a cult hero on Merseyside however, rolling back the years to play an influential role in a UEFA Cup, FA Cup and League Cup treble.

The experienced Scot scored a series of important goals throughout a memorable campaign, but none more so than an audacious winner away to Everton during the season’s run-in.

What a way to win a derby 😱 #TBT pic.twitter.com/1orVVDGHyw

A free-kick – all of 40 yards out – looked like Liverpool’s last chance in the fourth minute of stoppage time, with everyone inside the ground anticipating a cross as McAllister stood over the deal ball.

Spotting the positioning of goalkeeper Paul Gerrard, the midfielder instead whipped the free-kick into the near post to secure his place in derby day folklore.

The classic commentary from Clive Tyldesley was the perfect soundtrack to an incredible emergence, as a 16-year-old Wayne Rooney announced himself to the Premier League in stunning style.

Defending champions Arsenal were the visitors to Goodison Park and in the midst of a 30-game unbeaten run in 2002, with David Moyes turning to his precocious teenage talent with the scores level.

Rooney had been handed a handful of appearances for the Toffees, but his stunning late winner against Arsenal – his first ever Premier League goal – was the explosion of England’s next footballing star.

Another teenager whose first goal in the Premier League remains etched into the division’s folklore, Sir Alex Ferguson rolled the dice with the introduction of the 17-year-old as a substitute against Aston Villa.

Manchester United had found themselves 2-1 down to Villa at Old Trafford, a result which would have handed the 2008/09 title race initiative back to Liverpool.

Cristiano Ronaldo’s equaliser set up a grandstand finish, before Ferguson turned to his bench to hand the untested Macheda his opportunity.

What followed was a dream debut for the young Italian, whose moment of magic saw the Red Devils regain their position at the top of the Premier League.

Ryan Giggs’ pass was threaded into the feet of Macheda, who turned sharply before curling a wondrous finish beyond Brad Friedel to spark euphoric scenes inside Old Trafford.

Michael Owen’s free transfer move to Manchester United was greeted with a lukewarm reception, the former Liverpool forward proving rather unpopular on both sides of the north-west divide upon his arrival at Old Trafford.

Owen’s career had taken a downturn in fortunes since his initial exciting emergence, but Sir Alex Ferguson retained belief that a natural goalscorer could prove a fine addition to his ranks.

Injuries may have robbed Owen of his electric speed, though his razor-sharp instincts around the box remained in tact and his first home goal for the Red Devils proved one to savour.

WHAT. A. GAME.#OnThisDay in 2009, @themichaelowen scored a late, late winner for @ManUtd against @ManCity 😲

Manchester City’s billionaire takeover had seen the club’s cross-town rivals emerge as a genuine threat, with a new-look City side going toe-to-toe with their greatest rivals in September 2009.

The two teams exchanged six goals in a pulsating Manchester Derby clash and Craig Bellamy’s 90th-minute equaliser appeared to have rescued a dramatic point for City.

There was still time for one more twist in the tale however, as substitute Owen was freed in space by Ryan Giggs and poked home a finish that prompted contrasting emotions of despair and elation amongst the Mancunian rivals.

A goal that needs no introduction.

Stoppage-time on the final day of the season, to snatch the title from your biggest rivals – it doesn’t get much better than that.

Has there ever been a more aesthetically pleasing last-minute Premier League winner?

The aforementioned goals on this list may have had greater consequences in terms of title races or Champions League qualification, but can any hold a candle to Jordan Ayew’s sensational solo goal for Crystal Palace against West Ham?

With the scores level heading into the final moments, Ayew took matters into his own hands with this incredible individual effort.

It’s a goal that will live long in the memory for the Crystal Palace supporters and an effort that was deservedly named as the club’s Goal of the Season for the 2019/20 campaign.